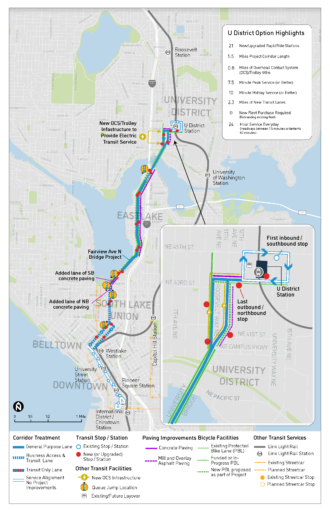 The Federal Transit Administration has recommended a $60.1 million grant to fund the RapidRide J project from the U District to South Lake Union via Eastlake.

“Coupled with funding from the Levy to Move Seattle that voters approved in 2015, the recommended $60 million grant would fully fund the RapidRide J Line project,” said Seattle Mayor Bruce Harrell in a joint press release with King County Metro. “Access to transit and safe streets are the things that make a difference in people’s life. This type of infrastructure makes our city welcoming to people of all ages and abilities and connects them to work, schools, recreation, and culture – creating One Seattle.”

The RapidRide J project is a major remake of the corridor, including long-awaited protected bike lanes on Eastlake Ave E and Fairview Ave N. We previously talked through the design details in great detail. Hopefully the $60 million is enough to fix the lacking bike protection at the south end of the University Bridge, one of the few lacking elements in a very exciting design that will make biking much more comfortable in this vital corridor.