The RapidRide J line project, currently scheduled to open in 2026, will upgrade the bus corridor between downtown and U District Link light rail station, and include protected bike lanes along Eastlake Avenue, one of the few bike projects that former Mayor Jenny Durkan specifically went to bat for. However, for a segment of Eastlake Ave E between Harvard Ave E and the University Bridge, the designs for the project haven’t included any physical barrier separating the bike lane and the other vehicle lanes, in contrast with the rest of Eastlake. 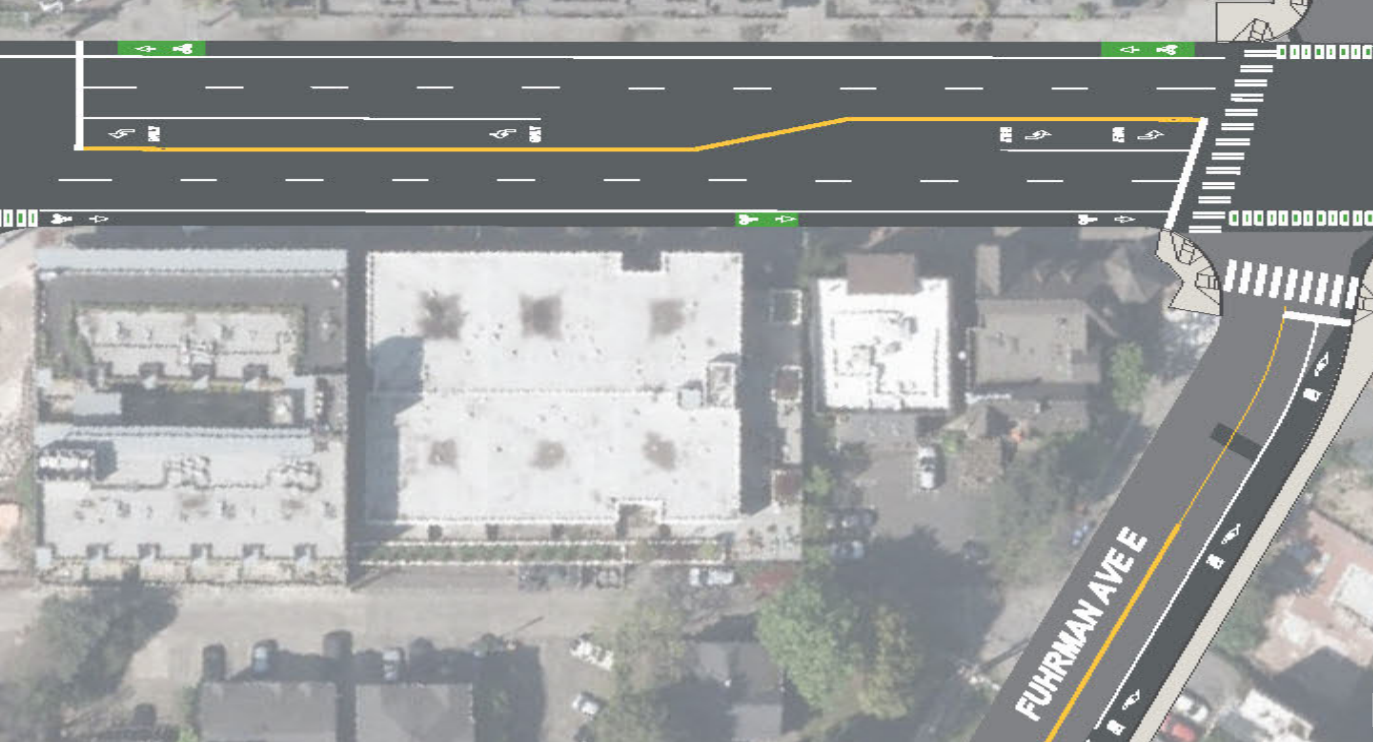 The plans for Eastlake Ave south of the University Bridge still include retaining the paint-only bike lane along the curb with no protection. (Photo: SDOT)

The intersection around Eastlake Ave and Fuhrman Ave has always been one of the most dangerous intersections in the city for people on bikes, with the harrowing merge for southbound cyclists to turn onto Harvard Ave close behind. In October, the Bicycle Advisory Board was told by the project team that traffic volumes were just too high between Harvard and the bridge to eliminate any of the five traffic lanes. The board pushed for creative solutions, such as elevating the bike lane to sidewalk level or a narrower barrier.

Cascade Bicycle Club and Seattle Neighborhood Greenways organized a push to submit comments pushing the project team to fix this segment. “Dropping the protected bike lane in this area is especially concerning due to the volume of vehicle traffic that travels at high speeds in connection with the I-5 highway on-ramp,” Cascade’s sample letter wrote.

This week, the project team for the RapidRide J project sent out an email update notifying people who had submitted comments that the design would largely be staying the same, with some additional green paint added.

Thank you for taking the time to provide your comment regarding the multi-modal improvements and the connections served by the protected bicycle lanes along Eastlake Ave E. The street width on Eastlake Ave E between Harvard Ave E and the University Bridge is limited and needs to accommodate all travel modes – including people biking, walking, driving, and taking transit. Because of the narrow width of the roadway in this section, and in order to accommodate all modes, the concept design plans do not include the 3-foot buffer that is included along the majority of the new protected bike lanes along Eastlake Ave E.

However, the current design for this section does include bike facility updates, such as green markings on the roadway, that bring attention to the potential conflict points between motorized vehicles and bicycles. Additionally, with the proposed redesign of the street, we would expect fewer motorized vehicles traveling adjacent to the bike lanes, making the bike lanes feel more comfortable.

As we work towards final design, we will continue to evaluate options to provide separation between the bike lane and the motorized vehicle travel lanes along this section of roadway while considering all roadway users. We will reach out to the community for an opportunity to participate in these conversations.

Calling Eastlake Ave narrow here, when it’s 59 feet wide, is a wild statement to make. A tremendous amount of effort is being expended to make space for people biking along the majority of the Eastlake corridor, and the city is ultimately just undermining their own work in a way that will likely frustrate everyone. A better solution must be found.

The RapidRide J and the accompanying bike facilities aren’t scheduled to open for use until 2026, which should be enough time to find a fix. But unless the environmental review process gets reopened for the project again, this key design flaw may be baked into the project.