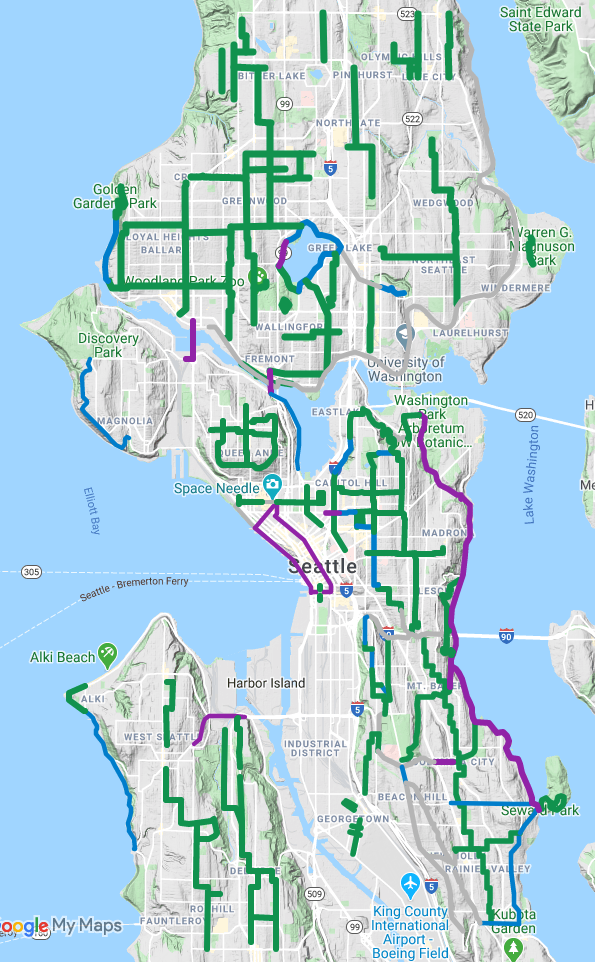 Seattle Neighborhood Greenways has been collecting people’s ideas for street improvements the city could make to help more people get outside and get around safely during the outbreak. They received 250 ideas, which they condensed into a map of 130 miles of car-light Stay Healthy Streets and temporary on-street walk/bike paths designed to relieve crowded sidewalks that are not wide enough for people to maintain six feet of separation as public health guidelines require.

“Narrow sidewalks (97% of Seattle’s sidewalks are too narrow for people to safely pass each other), missing sidewalks (the case for about ¼ of the city), and crowding at local parks and trails have made it difficult for local residents to enjoy fresh air and recreation at a safe social distance,” SNG wrote in a press release announcing the map.

The map is filled with good ideas. The biggest missing piece I see is Sodo, where there is huge potential in connecting Georgetown to downtown, helping many people avoid driving on streets that are now far busier due to the emergency West Seattle Bridge closure. Though perhaps this is more of a West Seattle Bridge-related project and less of an outbreak-related project. But no matter the reason, it would help people get around safely and affordably during these difficult times.

“Transportation comes in second only to housing for major household expenses in Seattle,” said SNG’s Clara Cantor in the press release. “And now, especially, with finances tight for folks, walking and biking are the most affordable means for getting to work for many of our city’s essential workers. We’ve got to make sure people can get where they need to go safely.”

And creating Stay Healthy Streets has proven to be effective, affordable and low-maintenance, important during a time when city resources are stretched thin.

“The expense is low—one driver in a city truck, distributing a traffic cone and two street signs to each intersection—and the payoff is so high,” said SNG Director Gordon Padelford in the press release. “We’re receiving loads of stories and photos of how people are making use of, and enjoying, the extra space for outdoor recreating. Right now, only a handful of neighborhoods are benefiting from the Stay Healthy Streets program. We really want to see this expanded to reach the whole city.”

Seattle Bike Blog spoke with Cantor and Padelford about open streets during the outbreak  recently, so be sure to check out that video.

The organization’s eight-part proposal also includes “decriminalizing walking,” which would make it legal (or decriminalized) to walk in the street. People often need to walk in the street to maintain six feet when crossing paths with someone else on our narrow sidewalks, so this should be allowed by law. Expanding available outdoor space could also help relieve pressure parks and prevent them from getting dangerously crowded.

“From what I’ve seen, in years of working with folks in Seattle’s black and brown communities, is that a police presence makes a difference in who feels safe being out and about in public spaces,” said SNG Community Organizer KL Shannon in the press release. “For folks who are getting targeted by implicit bias—just for being young, black, and outside—over-policing in the parks is going to be a disincentive for youth to get more physical activity while we’re in quarantine.”