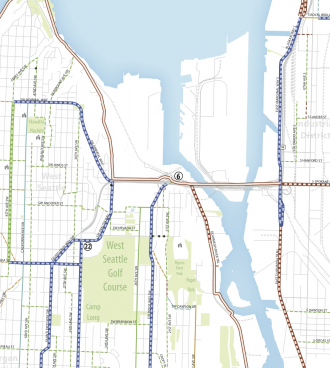 Seattle needs to take bold, unprecedented action to help many more people get around by bike during the longterm West Seattle High Bridge closure. This isn’t just about improving cycling conditions, it’s one of the only ways the city can keep the whole transportation system moving.

Every idea needs to be on the table, including efforts we have never tried before. This is an unprecedented challenge in recent Seattle history.

The West Seattle High Bridge is closed until at least 2022, and it may not ever open again in its current form. At this point, very little about the bridge is certain other than that it’s going to be closed for a long time. The lower bridge is still open, including the biking and walking path. Personal motor vehicles are not allowed, reserving this connection for transit, freight and emergency vehicles.

Of course the closure is already causing huge transportation problems for the neighborhood as everyone driving a personal vehicle who would have taken the bridge needs to reroute all the way to the 1st Ave S or South Park Bridges. But the real headache will come when the economy reopens and the 100,000 vehicles per day that typically cross the bridge have to find another route. There simply is not that kind of car capacity without the bridge.

This means biking will likely the most reliable and often fastest way to get across the Duwamish River. But as we explored in depth with the help of Anthony Palmieri of the community group West Seattle Bike Connections, the primary bike routes through and to West Seattle are often missing pieces or have other complications that make them either confusing or uncomfortable, especially for new riders. WSBC does great work to help their neighbors find routes that will work for them to help them get riding. But there’s a lot the city can do to remove obstacles that no amount of advice can get around. And many or all these projects can be completed at low cost, especially compared to the scale of this problem.

The city should be taking major steps to fully connect and protect bike routes to and through West Seattle. Just looking at the unfinished connections in the Bicycle Master Plan is a great place to start generating project ideas. But I thought I would highlight a few in particular:

E Marginal Way is the connection between downtown and the low bridge. It is in terrible shape, and the paint-only bike lanes are simply not good enough. When trucks from the Port back up, they often incur into bike space, and the bike lanes either disappear entirely or cross traffic lanes at intersections.

There is a plan to completely repave and redesign this street, which includes complete and separated bike lanes. The city is currently targeting 2021 for construction, though I don’t know whether the bridge closure will speed up or delay that work. Either way, the city should move immediately to improve this stretch in the meantime using temporary materials and giving people biking separated signals at intersections to eliminate interactions with trucks. If done well, this would provide a completely separated connection between downtown Seattle and the path over the low bridge and the Alki Trail. This sets up the rest of these projects for success.

First off, the city should create quick and dirty bike lanes using paint and plastic posts on Delridge Way SW as soon as possible to help people access the trail over the low bridge. A lot of street space typically used to access the high bridge is now mostly abandoned and could be repurposed. Such a connection will help a lot more people bike to and from the bridge on the most direct and least steep route.

The design for the RapidRide H project on Delridge Way SW was completed before the outbreak and bridge closure hit and is planned to begin construction this summer. We argued in February that the street needed complete bike lanes rather than the southbound-only bike lane currently planned. Even with a fully-functional West Seattle High Bridge, a bike lane that only goes one way makes no sense. Now that the bridge’s future is up in the air, this project should also be re-imagined.

Thinking longer term, the city should rethink the RapidRide H project, which currently has an incomplete design based on constraints that may not be relevant in the future. The design should look forward to the way Delridge Way should work, not backwards to the way it was.

SW Fauntleroy Way, especially the section between SW Alaska St and SW Avalon Way, needs bike lanes, too. These were planned as part of a major redesign of the street that has since been put on hold as the city waits to see how Sound Transit’s light rail connection will work. Now that the street no longer connects to the bridge for the foreseeable future, the city should install quick and dirty bike lanes to help people bike between the Junction and SW Avalon Way, where crews are still putting the final touches on brand new bike lanes.

SW Admiral Way could use complete, separated bike lanes. The fastest and most direct route between the low bridge and the North Admiral neighborhood, this street is designed to move a lot of cars to the high bridge. There is no bike lane headed eastbound down the hill, and there are no bike lanes in either direction for the scary curve between 37th Ave SW and SW Olga St. Completing a comfortable bike connection here would serve a lot of homes that are facing some of the longest car detours.

The short northern gap in the Duwamish Trail should be completed. The trail is a flat and mostly comfortable connection all the way from South Park and Georgetown to a random unnamed driveway just a few blocks south of the path over the low bridge. Then it disappears, leaving people to either bike on industrial W Marginal Way SW or on a skinny sidewalk before weaving through some industrial alleyways to connect to the bridge. The city should create a safe and easy to follow path for trail users to complete this connection, perhaps by reallocating space on W Marginal Way SW.

And with traffic patterns so disrupted, the city should be monitoring and fixing safety issues that arise across West Seattle and the Duwamish Valley, including installing diverters on slow side streets and neighborhood greenway routes to prevent cut-though traffic. Crosswalks on newly-busy streets will likely also need upgrades.

This is a long to-do list, but much of it could be completed at a low cost by using existing street space that is no longer needed to funnel cars to the bridge.

Biking and walking connections to the South Park and 1st Ave S Bridges could also be improved to prevent safety issues as traffic there increases. South Park in particular could experience a big increase in traffic danger since the main routes to the South Park Bridge, S Cloverdale St and 14th Ave S, are neighborhood streets with lots of homes and businesses.

Another really interesting idea is to create a biking and walking connection on the section of the bridge west of the troubled span over the Duwamish River. For example, the section of the bridge from 35th Ave SW and SW Fauntleroy Way to the Duwamish River is also closed to traffic, but is a mostly separate structure from the crumbling span that crosses high above the river. Could parts of this infrastructure be safely repurposed to make faster, more gradual and more direct biking and walking connections up the hill from the low bridge and heart of the neighborhood?

The city is going to have to get very creative, especially if people keep avoiding transit due to the outbreak. Biking can’t solve the whole problem, but anything the city can do to support more people to take more trips by bike will only help everyone get through this. Any new trip made by bike not only helps the person biking, but it also helps everyone else by taking a car off the packed detour route or creates more space inside buses.

Even unprecedented action, like subsidized bike purchases and/or public funding for a West Seattle/White Center community bike organization similar to Bike Works, might be worth considering. I have no idea what a program like this would or could look like, but it’s worth looking into. Helping someone get a reliable bike that will work for them, including e-bikes to help with West Seattle’s often ridiculous inclines, might turn out to be a surprisingly affordable solution. Even something like temporarily exempting local bike sales and repairs from sales tax would help.

Another way to help grow cycling access would be to help fund a non-profit community bike shop and education organization or fund West Seattle-specific programs by existing organizations like Bike Works and Cascade Bicycle Club. These efforts could be aimed at providing affordable access to bikes, educating people on how to keep their bikes in good working order and building community around biking. Again, I have no idea what is feasible, but it could be worth exploring.

Do you have any other ideas I haven’t mentioned? Let us know in the comments below.