Led by former Councilmember Mike O’Brien, Seattle passed an ordinance last year that all but requires SDOT to build out the planned bike network as part of any major repaving projects along a planned route. And the ordinance faces its first test as SDOT does not plan to build complete bike lanes on Delridge Way SW as part of the RapidRide H project.

We already saw the law have a positive impact on the joint SDOT/Federal environmental assessment of the RapidRide J project that includes Eastlake Ave bike lanes. Because compliance with local laws is an important factor in environmental review, the Eastlake bike lanes were cited in the study as in compliance with Seattle’s new ordinance. As we noted in our story about that study, the law flips the old script by making construction of planned bike lanes the path of least resistance for a project. Decisions not to build them would require jumping through hoops and review by the Seattle City Council Transportation Committee. (Full disclosure: My spouse Kelli was a legislative aide to Councilmember O’Brien and worked on this ordinance)

The key line in the ordinance is: “Whenever the Seattle Department of Transportation constructs a major paving project along a segment of the protected bicycle lane network, a protected bicycle lane with adequate directionality shall be installed along that segment.” “Shall” is a particularly strong legal term, though the ordinance does provide a path for SDOT if they feel they cannot build planned bike lanes. And that’s the process that’s being tested for the first time now.

SDOT has sent a letter to Council (PDF) outlining why a planned project will not build the bike lanes noted on Delridge Way SW in the Bike Master Plan when the RapidRide H project redesigns the street. Construction is scheduled to begin this summer or fall and be complete next year. UPDATE 2/28: For more information, here’s SDOT’s longer response (PDF) to Councilmember Lisa Herbold’s budget proviso on the project.

We wrote about this project in October, arguing that there is room for better bike lanes on Delridge than what is planned. The city’s plan is to build a one-way protected bike lane that only goes southbound from SW Juneau St to SW Cambridge St. Going northbound? ¯\_(ツ)_/¯

The official answer to people who want to bike in both directions (not an unreasonable desire) is that they should take the winding and incomplete neighborhood greenway up the steep hill to the west of Delridge Way SW. This so-called neighborhood greenway is so winding that it crosses 16th Ave SW two times within a couple blocks, has a busy stretch with only sharrows and even has a staircase in the middle of it. 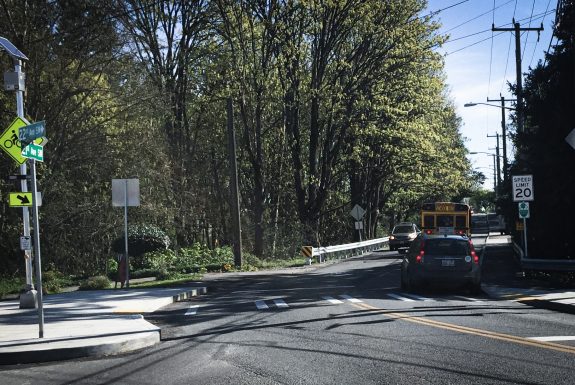 This is not an all-ages-and-abilities bike route.

SDOT’s letter shows that they think this greenway is good enough to qualify as an all-ages-and-abilities alternative. Here’s are some excerpts from the letter (PDF):

The Seattle Department of Transportation (SDOT) has determined that meeting the conditions set forth in the ordinance are not practical for Delridge Way SW RapidRide H Line because, as stated in Section 1(B) of the ordinance, the “physical features or usage of [the] street… prevent[s] the incorporation of a protected bicycle lane with adequate directionality.”

The following are references in the BMP that provide guidance moving forward with implementation of bicycle connectivity if the recommendations in the BMP were not practical:

⦁ P.52 – Strategy 4.2.2 – Discusses the process for using a parallel greenway to provide bicycle connections if unable to move forward with a cycle track or protected bicycle lane. According to the BMP “If through the process SDOT determines that a proposed cycle track is not feasible, implement a neighborhood greenway on a parallel street to provide an all ages and abilities bicycle connection to destinations”.

⦁ P. 70 – Under Multimodal Corridors the BMP provides context on treating bike facilities when implementing multimodal corridors. According to the BMP: “while all efforts will be made to implement the recommended bicycle network on the multimodal corridors, people riding bicycles can more easily be accommodated on parallel non-arterial streets than other modes.”

⦁ P. 95 – Strategy 7.1.1 – Discusses the project delivery process and what to do if a protected bicycle lane is not practical. The strategy states that through public engagement, data collection and technical analysis SDOT can develop concept design alternatives. Once there is a preferred design: “if it has been determined that a recommended cycle track (protected bicycle lane) is not feasible on the arterial street, then the project team would incorporate an adjacent neighborhood greenway to ensure people of all ages and abilities can ride to their destinations on all ages and abilities bicycle facility”.

SDOT considered these strategies throughout the planning and design phase of the Delridge Way SW RapidRide H Line project.

SDOT recognized early on that the design would include trade-offs between the travel modes due to the physical limitations and usage of the street. Adding bus lanes separate from the general travel lanes to keep the most people moving made it technically infeasible to add new protected bicycle lanes both northbound and southbound for the full length of the project area because of width constraints.

It’s pretty late in the process now, so I’m not sure what a good outcome could be for this project. We argued in October that at the very least, the project should connect Chief Sealth High School and Denny International Middle School to SW Juneau Street, where people biking can connect to the pretty good 26th Ave SW neighborhood greenway (UPDATE: See below for an issue raised by a reader). But the team cited school bus parking for Louisa Boren STEM K-8 School as a reason not to do that. So all three of these schools will remain unserved and disconnected from the bike network.

Maybe some upgrades to the Delridge greenway could help a little. Bike lanes on 16th Ave SW between Kenyon and Webster Streets would at least get rid of an annoying jog in the route, and improvements to 18th Ave SW could provide an option that doesn’t include a staircase. But I don’t know what’s possible for the busy stretch north of SW Dawson St. I know it was hard to even improve that sidewalk a few years back, so I don’t think they can add bike lanes without turning it into a one-lane road. And since there is a bus route there, I don’t know if that’s really an option. They could just build bike lanes on Delridge Way. Oh wait…

Councilmember Lisa Herbold wrote about SDOT’s letter in her blog, though she did not indicate whether she planned to push back. Delridge is in her district and she is a member of the Transportation Committee:

During the Council’s budget process, I sponsored a budget proviso requiring SDOT to report back to the Council on a number of items before proceeding with the Delridge Way SW – Rapid Ride H Line project.

The Council has received the first report, regarding “Implementation of the Bicycle Master Plan as part of the project, as required by Chapter 15.80 of the Seattle Municipal Code.” SMC 15.80 comes from Ordinance 125902, adopted by the Council in September 2019 to require that “whenever SDOT constructs a major paving project along a segment of the protected bicycle lane network, a protected bicycle lane with adequate directionality shall be installed along that segment.” It states that If the SDOT Director determines that “the characteristics of the physical features or usage of a street, or financial constraints of full compliance prevent the incorporation of a protected bicycle lane,” the Director shall provide a written report to Council detailing the following information:

SDOT has determined that meeting the conditions set forth in the ordinance are not practical for Delridge Way SW RapidRide H Line because, as stated in Section 1(B) of the ordinance, the “physical features or usage of [the] street… prevent[s] the incorporation of a protected bicycle lane with adequate directionality.”  SDOT’s report to Council outlines the technical constraints that influenced the decision-making process, the alternatives considered in determining full compliance is not practical, and how connectivity of the bicycle network is advanced through the project.

Here’s a link to the report, which describes alternatives considered, and SDOT’s decision making process.

SDOT has indicated a report on the remaining items identified in the budget proviso will arrive soon. 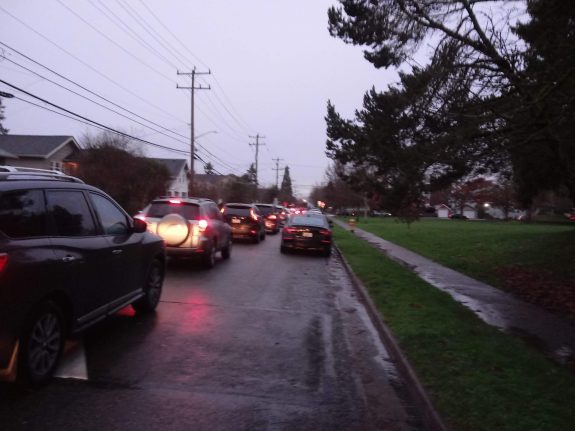 UPDATE: Shortly after posting, reader Joe Laubach reached out with a this photo and a letter he wrote recently to SDOT staff and Councilmember Herbold highlighting an issue where people driving spill over to clog the 26th Ave SW neighborhood greenway when Delridge traffic backs up. Joe said he heard the city was planning traffic diverters on this greenway to prevent people from using it as a through-route when driving, which would be a great solution. So it would be good to hear from the team that diverters are part of the project. Because the street in Joe’s photo is not a quality bike route, and it’s not welcoming to people of all ages and abilities. Thanks, Joe!

Hello,
I would like to pass along information about conditions on the 26th Ave SW greenway in West Seattle.
The greenway is a great route for bicyclists in West Seattle to get to/from the Spokane St. bridge.  It is a delight to bike along this greenway on the weekends.
Unfortunately the greenway has severely deteriorated for cyclists during the morning commute.  In the past 12 months, Delridge has experienced increased car volumes and delays likely due to a number of factors.  This has caused car drivers to divert off of Delridge and onto the greenway to speed up their commute.  The once safe/accessible greenway is now congested with cars on days when Delridge is backed up.  The greenway is no longer a reasonable route for bicyclists on many days.
The attached photo was taken (by me!) on January 22, 2020 at 8:02AM.  This is what a bicycle rider faces when trying to bike northbound on the 26th Ave SW greenway approaching SW Genesee.    I would estimate the car backup to be about 60 cars deep — extending all the way to SW Andover St.  There is really no safe way for a bicyclist to use the greenway in this condition.  Please look at this picture and ask yourself this question:  “Is this what a greenway is supposed to look like?”
Please consider bicycle infrastructure with the Delridge Multimodal Corridor design.  We need to either have bike lanes on Delridge or some way to keep car volumes off of the parallel 26th Ave SW greenway.  My fear is we will not be able to convince people to ride bikes if we cannot provide a safe and accessible bike route.
Thank you,
Joe Laubach
Highpoint resident and parent of student at Lousia Boren STEM K-8