There is room for a better Delridge bike lane

The city’s RapidRide H project on Delridge Way SW is shaping up to be one of the most disappointing so-called “multi-modal” improvement projects in the city. With a huge need for people to bike along this rare, relatively flat and continuous street spanning the neighborhood from the West Seattle Bridge to White Center, the project’s bike elements call for a mix of strange half solutions and downright non-solutions. It would even remove an existing northbound bike lane that serves Chief Sealth High and Denny International Middle Schools.

But it doesn’t need to be this way. By taking advantage of unused road space, the project could be better. And by prioritizing safety over car parking, it could be great.

First, let’s look at the 30% design (large PDF) and talk about the problems that need solving.

Planners are trying to create two very separate bike routes, one for people headed in each direction. This is very unconventional, and not in a good way. The plans also call for attempting to route people biking onto various side streets, often with very steep inclines between those side streets and Delridge if they connect at all. Here’s an overview (note that minor streets are omitted, so there are blocks between these lines that are not shown): 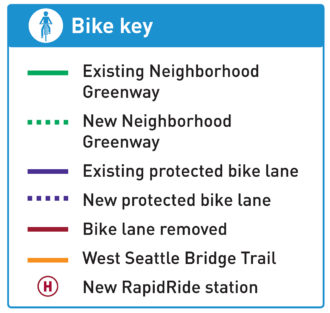 It looks kind of alright on paper if you’ve never been on these streets. But West Seattle is not flat like a map.

People did fight for complete bike lanes on Delridge, but complete bus lanes, turn lanes and car parking were prioritized. But that doesn’t mean there isn’t still room for significant improvements that will make the investment go a lot further for people trying to get around on bike while also prioritizing buses.

The southbound route isn’t perfect, but it is at least workable. I could see people actually using it and getting benefit from the improvements. But we really need to talk about the northbound route.

The biggest problem is that it follows the existing Delridge-Highland Park Neighborhood Greenway several blocks to the east of Delridge, which is complete garbage. It’s a joke of a bike facility. There’s a very busy section with just sharrows, a section that crosses the same busy street two times within view of each other (though this project should fix that, at least), and there’s even a damn staircase in the middle of it: 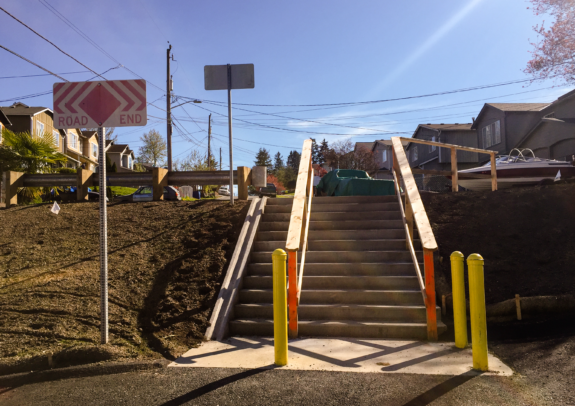 This is not a bike route.

Riding it feels like you are being led around by someone who is pretending to know their way but clearly doesn’t. When you hit the staircase, you really start to wonder if you’re the butt of some kind of joke. Did the design team really just give up like this? Rather than combining a greenway with sections of bike lane on 16th Ave SW where needed, the route compromises usability at seemingly every opportunity. The result is a real shame. I’m sure parts are nice for some intraneighborhood trips if you live there, but it’s not a quality cross-town bike route.

But the shoddy quality is almost beside the point, because this route just is not a Delridge Way alternative by any stretch of the imagination. If anything, it is a 16th Ave SW alternative, an entirely different arterial street. It is at times six or even eight blocks out of the way round trip. And the cliff face you have to climb is absurd at points. There is even a mile-long section without a single connection between the greenway and Delridge.

So we gotta figure out something better.

The most obvious solution is bike lanes on Delridge, and for most of the road, this can be accomplished by removing on-street parking and/or reallocating space reserved for a center median. Three parking studies (PDF) and public outreach responses (PDF) all showed that parking in the area is not hard to find. This is a very simple solution by design standards. Only politics and fear make it difficult.

Here’s a sample of the road design between SW Holden St and SW Roxbury St:

If the city prioritizes bike safety and connectivity over on-street parking, the solution here is clear. Use the parking space on the east side of the street for a northbound bike lane. Done!

But there are other section where removing on-street parking isn’t even necessary. For a significant stretch of the street between SW Orchard St and at least SW Juneau St if not SW Alaska St, there is this funny little center buffer space that isn’t wide enough for a turn lane. But it just so happens to be as wide as a bike lane…

I don’t know what the exact design should be, but I wanted to demonstrate that the existing design has both space to work with and needs that remain unmet. We should be demanding more from our public improvements.

Even if the city only fixes the section that doesn’t remove parking (which, of course, I am not advocating for), they would be able to create a northbound bike lane that would serve Chief Sealth High and Denny International Middle Schools. The current design would remove an existing northbound bike lane between SW Kenyon and Myrtle Streets, which is unacceptable. We can’t go backwards on our bike network, especially when serving our city’s students.

Getting bike lanes as far north as Juneau would at least provide a connection to the 26th Ave SW neighborhood greenway, which has a decent connection to the West Seattle Bridge Trail. So connecting Chief Sealth High to Juneau should be the minimum goal of this project.

The Delridge project is nearing the end of its design phase, but there’s still time to make changes. The project timeline doesn’t have design finishing until early 2020, and the feedback summary (PDF) from public outreach on this concept showed clear dissatisfaction with their proposed bike solution. So SDOT and city leaders should not accept this design as complete yet. Instead, they should back up our city’s climate, biking, transit and walking goals by completing quality, usable design that will actually work for everyone.

Founder and Editor of Seattle Bike Blog.
View all posts by Tom Fucoloro →
This entry was posted in news and tagged Delridge Way SW, rapidride h, sdot. Bookmark the permalink.