With the West Seattle High Bridge closed until at least 2022, talks begin about building a replacement 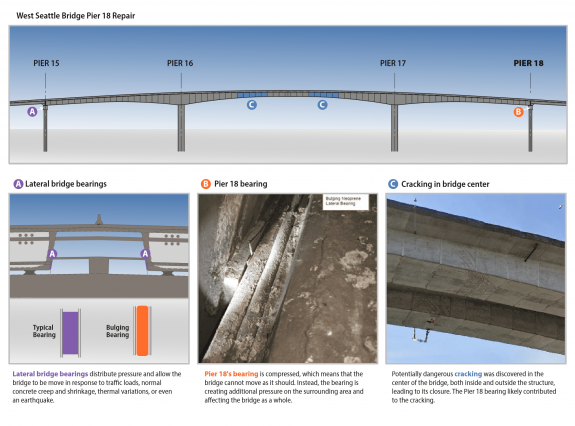 As we learn more about the unexpected and sudden closure of the West Seattle High Bridge at the end of March, it’s looking more and more like the decision to close the bridge prevented a horrific tragedy. Cracking on both sides of the support structure of the longest span was on a path to meet at the center. And if that happened, engineers said, the structure could have collapsed. That’s six lanes of traffic on the city’s busiest non-interstate bridge plummeting from a ridiculous height.

I’m sure there will a lot of investigation into how the bridge got to this point and whether the city could have prevented it. But first, we need to acknowledge that inspectors and the city’s transportation chain of command made a very good call by closing it when they did.

The cracking immediately slowed when traffic stopped, but it has continued. The bridge itself is so massive that it makes up a huge percentage of the total load on the structure, so removing traffic can only do so much. This is also why they are not going to be opening the bridge to walking and biking. You don’t want to be up there.

The high bridge will be closed at least through 2021, and this means biking will only become more important for West Seattle as the path over the low bridge remains one of the best ways to cross the Duwamish River. See our previous story and video, in which Anthony Palmieri of West Seattle Bike Connections walks through some popular bike routes in the neighborhood.

The city announced Wednesday that it will cost $33 million to maintain the lower swing bridge (which is prone to failures itself), change traffic controls, and to stabilize the bridge so it doesn’t fall down on its own and can handle the workers and equipment needed to make a bigger and more expensive fix.

City engineers are also not confident that they can repair the bridge at all, and they definitely cannot fix it well enough to make it operational for its full expected life span, which should have had it operational until the 2050s or 2060s. If they can repair it at all, the city doubts they could get more than 10 years out of it. So conversations are already starting about replacing the bridge entirely, an effort that will be measured in hundreds of millions of dollars. Which we don’t have.

It is difficult to state how disruptive this will be not only to the lives of people living and working in West Seattle, but also to the city’s transportation budget. Without a big new revenue source, the money will have to come from somewhere. And as the city faces a massive health crisis and an enormous sales tax shortfall from the outbreak, there just isn’t going to be money lying around. I would bet this puts talk of a new Magnolia Bridge to rest. Perhaps the same goes for a new Ballard Bridge. But more immediately, sizeable chunks of money already budgeted will become pretty appealing, too. District 1 (West Seattle) Councilmember Lisa Herbold has already suggested cancelling the Center City Streetcar project, something she has tried and failed to do several times already. But this time she might have a good shot at it. Any other city project with a large budget that has not yet begun construction could also be at risk. Capital projects like big repaving projects are also a pretty juicy pot of money, which would mean falling further behind on road maintenance.

Oh, and did I mention that the court case against the transportation-slashing I-976 is still up in the air and Seattle’s Transportation Benefit District expires at the end of the year without a clear path to renewal? Ahhh! Breathe, breathe, remember to keep taking deep, calming breaths (but not in close contact with others, there’s still a pandemic out there. Oh, that didn’t help with the calming? I’m sorry. This year sucks.).

The state budget has a lot more money to work with than the city, including hundreds of millions budgeted for freeway expansion projects that would make greenhouse gas emissions worse. We’ll have to see if the will exists in Olympia to move some of that money, though. The national government is also releasing lots of stimulus funding, and infrastructure projects could get a boost. It’s unclear whether any of this will make it to the West Seattle Bridge, but maybe? My point is that I don’t see how Seattle funds this project on its own, at least with current revenue options.

Amid all this uncertainty, SDOT Director Sam Zimbabwe has done a great job leading the city’s response. Perhaps it helps that Zimbabwe is a West Seattle resident himself because he’s personally in this with the neighborhood. He was not here when the cracking began, and inspectors were already monitoring the problem before he took the reigns at SDOT in early 2019. He has been honest and clear through the whole process of what will be a defining challenge of his tenure at SDOT. He has never sugarcoated this problem as city leaders sometimes do, and I think any effort to do so would have backfired horribly. Instead, Zimbabwe has been a trustworthy leader, which is going to be vital to get buy-in from frustrated residents and to find a path forward that is both politically viable and forward-thinking.

And it’s going to take strong leadership and cross-agency, cross-jurisdictional teamwork to get through this. If a new bridge is needed, the obvious solution is to build a structure that carries both cars and Sound Transit light rail (and maybe a bike path, too?). This could potentially save some money and move West Seattle light rail up the implementation schedule.

25 Responses to With the West Seattle High Bridge closed until at least 2022, talks begin about building a replacement