UPDATE 8/20: SDOT says the closure could start at early as September 16. 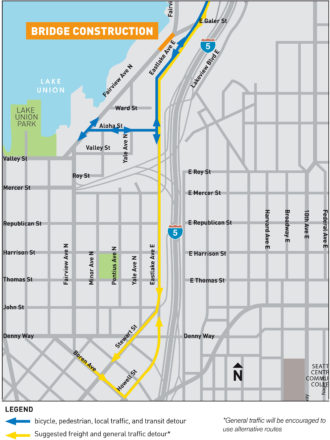 If you bike along the east side of Lake Union into the city center, then you should get ready for a significant change to your bike route later this year.

Work has already started to prepare for the Fairview Ave N bridge replacement, but the extended closure of the bridge will cut off the only flat bike route between Eastlake and South Lake Union/downtown for more than a year. So it’s not a bad idea to start trying out some alternate options to see what works best for you.

You may not fully realize you are on a bridge when you cross over the Fairview Ave N bridge. But if you walk along the floating path to the north of the bridge, you can see that the roadway is supported by aging timber that doesn’t inspire a ton of confidence. The structure does not meet seismic standards, and it is the final timber-supported major bridge left in the city. Replacing it was a key project in the Move Seattle Levy, which voters approved in 2015.

The full bridge is scheduled to close for construction in the Fall and won’t reopen until 2021. Exact dates are not yet listed on the project webpage. The new bridge will have a two-way bike lane and a sidewalk on the north side of the bridge:

Work is underway right now to build elements of the Aloha Street walking/biking/transit detour. This will probably be the best option for most people, though it does include some significant climbing. A new traffic signal at Aloha and Eastlake should help people heading north make that left turn onto Eastlake.

One big question is how well the paint-only bike lanes on Eastlake Ave will hold up under the expected increase in traffic.

One poorly-kept secret for Eastlake-to-downtown riders is that it is significantly faster to bike all the way up the hill on Eastlake Ave to the REI Flagship store, then ride down Stewart St. This includes much more hill climbing and lots of mixed-traffic biking, but many people are willing to make those trade-offs for the big time savings versus slogging through all the stop lights and traffic in South Lake Union. Avoiding Mercer St entirely is itself a big benefit for this route.

However, this route may be significantly worse once Fairview car traffic is detoured up Eastlake (see map at the top of this post).

If you make it all the way to the bridge closure, then the official detour is probably going to be the best option for most people. However, if you have a longer route, you may be better off detouring earlier in your route to avoid the whole bridge area entirely. Below are two options I came up with. If you have another idea, please share it in the comments below. 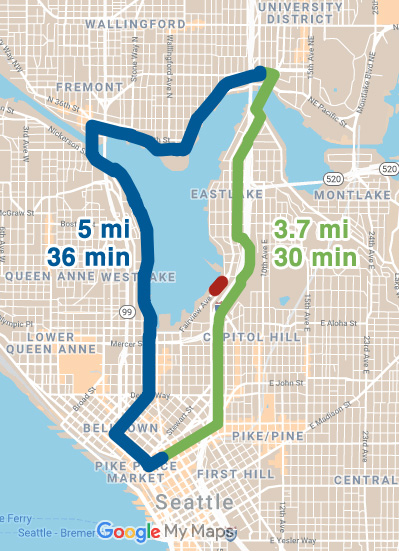 One of my favorite routes from the U Bridge to Capitol Hill is to cross under I-5 via the pathway at Franklin Ave E and Harvard Ave E, then bike through the neighborhood to the I-5 Colonnade Park. From there you can connect to Lakeview Blvd (which could really use some bike lanes) which feeds into the Melrose Connector Trail and Melrose Ave. It’s not too hilly compared to other Capitol Hill routes, and there’s limited mixed traffic biking compared to Eastlake Ave. It’s not a perfect route, but you may be willing to make the hill climbing and time trade-off for the more pleasant experience. Riders headed to South Lake Union can take the Lakeview Bridge over I-5 at Belmont Ave, which will drop you onto Eastlake Ave at Roy St.

This option may sound absurd at first, but many people who use the University Bridge could detour to the Fremont Bridge for a modest time increase. But trading some time for lower stress could be worth it for people who don’t want to deal with the Fairview Bridge detour area. Maybe traffic around the detour won’t be so bad and this will be a non-issue. We’ll have to wait and see. But if it is a problem, Fremont might be worth it for many U Bridge users.

Many people already do this today in an attempt to avoid Eastlake Ave even though it takes longer. However, imagine how amazing it would be to have safe bike lanes on Eastlake from the U Bridge to the new Fairview Bridge bike lane to new bike lanes on Fairview to Lake Union Park and 9th Ave. This is all possible if the city keeps the Roosevelt-to-downtown RapidRide project on schedule and doesn’t water down the safety elements (this may require organizing to support the SDOT’s current plans). Tying all these connections together would revolutionize biking east of Lake Union and open so many more homes and destinations to biking for so many more people.  The next year or two are going to be dark times for biking in the area, but there’s a very bright future not so far away.

This entry was posted in news and tagged eastlake, fairview ave n, sdot. Bookmark the permalink.