An effort to build a faster and more reliable bus route along the Roosevelt Way/Eastlake Ave corridor is also an incredible opportunity to improve biking and walking conditions along the way.

The project — now called Roosevelt RapidRide — is going through a Federal Environmental Assessment, and public comment is open now until January 12 on the scope of that assessment. You know what that means. Let them know that biking and walking connectivity and safety should be top priorities, and that the protected bike lanes included in the plan will be huge improvements. There is a drop-in style open house TODAY (Monday) from 5 – 7:30 p.m. at the Silver Cloud on Fairview Ave N (apologies for the very late notice).

You can also submit your comments in writing to [email protected].

The project’s preferred alternative includes many of the most important bike connections for this project, such as upgraded bike lanes on 11th/12th Ave from Roosevelt to the U Bridge and protected bike lanes on Eastlake Ave E and Fairview Ave N. Unfortunately, very exciting bike lane concepts on Fairview Ave N in the heart of South Lake Union and on Stewart St have been cut. The bus improvements north of Roosevelt Station, including improvements going as far as Northgate, have also been scaled back since earlier versions.

For biking, Stewart St is a particularly important and promising route for protected bike lanes, so it’s sad to see that left off the preferred alternative.

Eastlake Ave E is one of the most important bike route improvements in the whole city, since it connects our state’s largest employment center to one of the only bikeable bridges across the Ship Canal. It’s hard to overstate how exciting it is to see those bike lanes in the preferred alternative.

Here’s the planned project route and improvements under the preferred alternative: 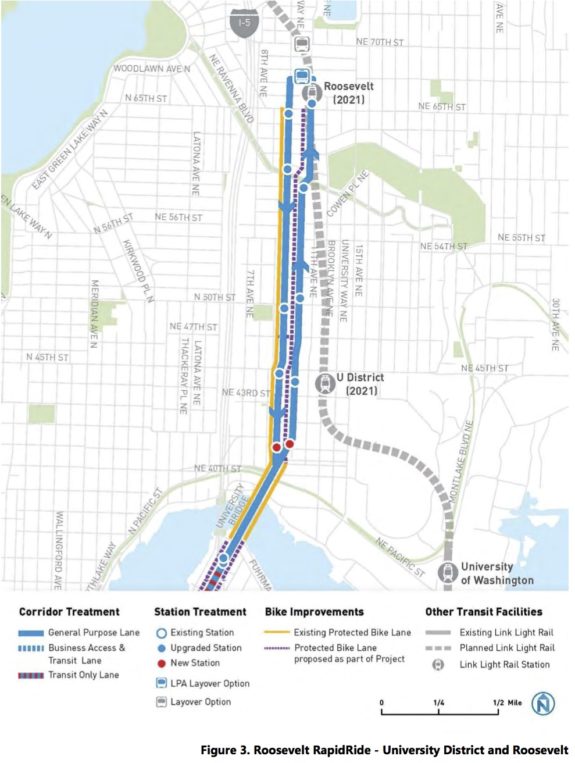 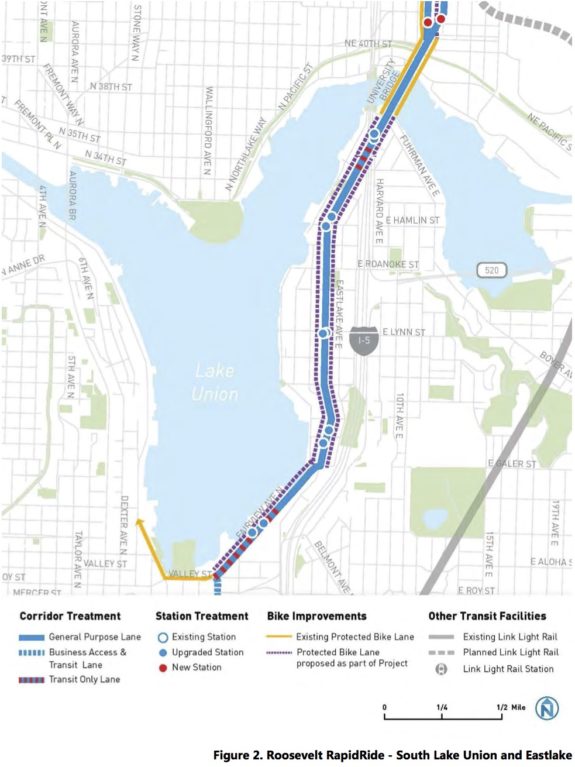 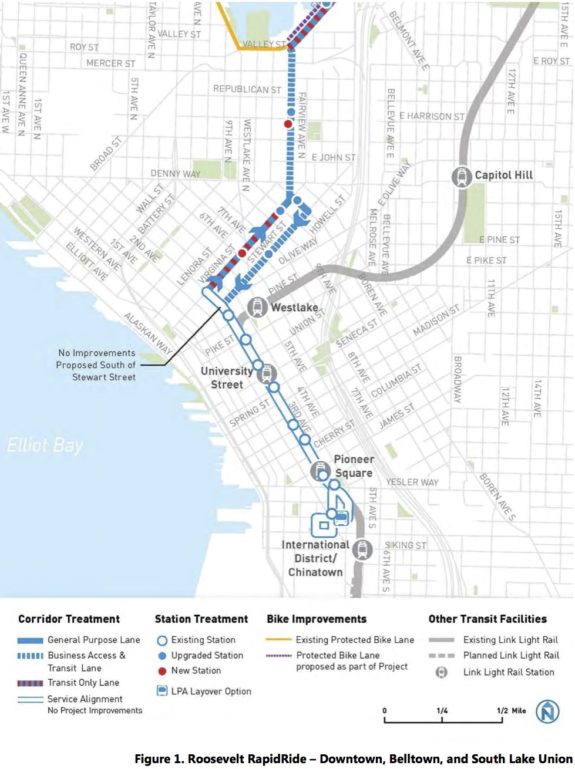 With significant transit service and dense, walkable n eighborhoods, there is a high level of pedestrian and bicy cle activity along the corridor, yet s everal intersections have above – average rates of bicycle and pedestrian collisions with vehicles . From 2010 to 2014, six intersections along the corridor were r eported to have three or more pedestrian injury collisions and five intersections with four or more bicycle collisions with injuries . 11 T he City of Seattle Bicycle Master Plan recommends protected bicycle lanes as one of the highest priority bicycle network investments, given the geographic constraints and limited bicycle route alternatives to the corridor . Additionally, numerous sidewalks and intersections do not meet current City of Seattle standards and do no t compl y with the ADA .

Founder and Editor of Seattle Bike Blog.
View all posts by Tom Fucoloro →
This entry was posted in news and tagged eastlake, roosevelt to downtown hct, sdot. Bookmark the permalink.