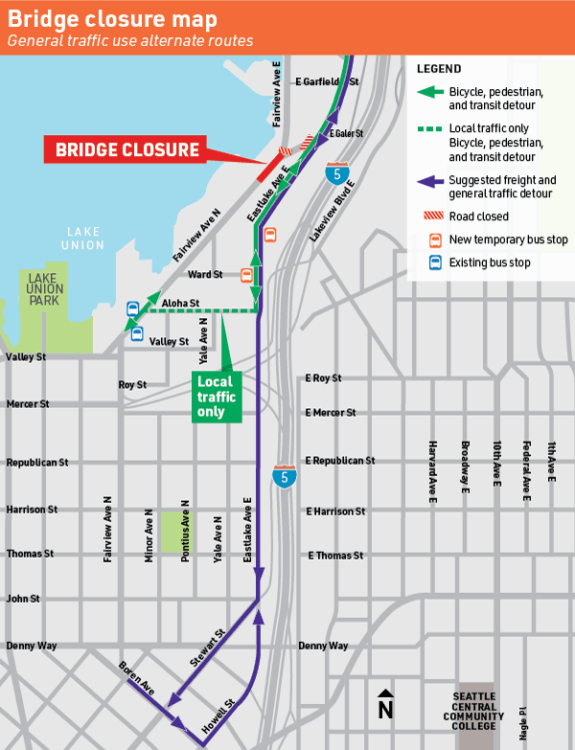 As we reported previously, the biking, walking and transit detour will be routed via Eastlake Ave and Aloha Street. People driving southbound will be directed to continue south on Eastlake Ave to Stewart Street or any of the many streets into South Lake Union along the way. Northbound, people headed to Eastlake will be directed out of downtown via Howell Street.

This is hillier than the current bridge option, for sure. But the real effectiveness of the bike detour will come down to whether they can maintain low and slow car traffic levels on the street. The plan notes Aloha as “local traffic only,” but will many people just drive there anyway? And given how many jobs are located in the area, there may be quite a bit of “local traffic.” I guess we’ll find out Monday.

Additionally, the car detour could make Eastlake Ave more stressful for people who currently bike that route. So even if you don’t use the bridge, this change may affect your route. So just be prepared and give yourself a little extra time starting Monday.

In our previous post, we also discussed some options for avoiding the area entirely.

The Fairview Bridge, which is at road level and hardly feels like a bridge when you use it, is the city’s final major timber-supported bridge. It is pretty much falling apart and is in no way ready for an earthquake. It’s one of the largest investments in the 2015 Move Seattle Levy.

The remade bridge will have separate biking and walking spaces on the east side. It should open in 18 months, so winter/spring of 2021.