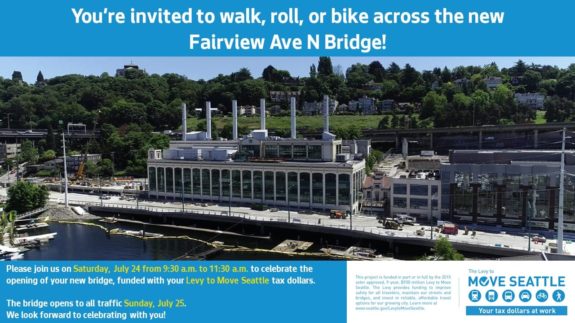 Construction work is wrapping up on the new Fairview Ave N Bridge, finally bringing an end to a long closure of a major bike route between South Lake Union and Eastlake.

The bridge opens to all traffic Sunday, but people walking and biking will be able to cross starting Saturday. SDOT is hosting an opening celebration 9:30–11:30 a.m. Saturday.

The old bridge was closed back in September 2019. I suppose if this important route was going to be closed for so long, a pandemic was a good time for it. The detour via Aloha Street adds a significant amount of climbing to the route, so the bridge reopening will be very welcome. 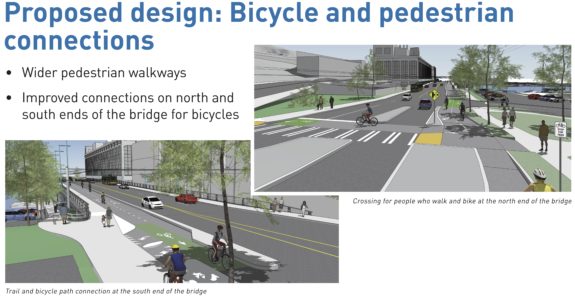 Concept images from an SDOT presentation.

The new bridge will have a two-way bikeway that operates similar to the old bridge, but the sidewalk will now be separate from the bikeway. Ideally, SDOT would have taken the long time they had during this closure to build a bike connection on Fairview between the bridge and Lake Union Park, but they did not. So for now, people biking on this wonderful new bike path will again have the no-win choice of either squeezing onto the west sidewalk or mixing with general traffic. 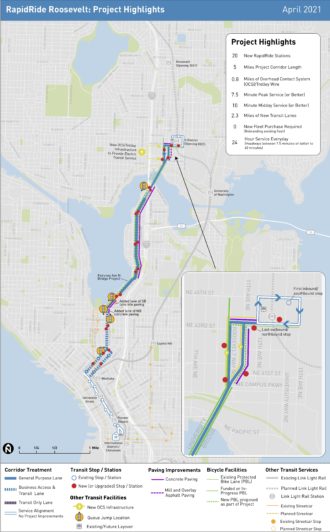 The streets around the bridge will change when the RapidRide J project is constructed. The current design calls for protected bike lanes on Eastlake Ave E and Fairview Ave N all the way from Lake Union Park to U District Station. That work is currently scheduled to begin construction in 2023.

More details on the new bridge opening from SDOT:

The bridge is also a key part of the recently approved future route of King County Metro Rapid Ride J. This route will connect people to thousands of jobs in several of Seattle’s fastest growing neighborhoods including Belltown, South Lake Union, Eastlake, and the University District. Over the next few years, SDOT and Metro plan to make other major investments along the rest of this route to improve transit travel times, reliability, and capacity.

The brand-new bridge has been built to robust seismic and structural safety standards, and is a good example of one of the ways we take care of Seattle’s 124 bridges. We have completed 32 seismic retrofit projects on other bridges over the past 30 years and plan to complete nine more projects by 2025. Seismic retrofit projects bring older bridges up to modern earthquake safety standards and go above and beyond the ongoing maintenance, inspections, preservation, and basic repairs which we perform continually to keep Seattle bridges safe and stable.

The work is complete just as Seattle is reopening and in time for tens of thousands of people to return to work in South Lake Union and downtown.

The new bridge benefits all travelers, especially bus and bike riders who will both experience faster and more direct trips now that the long-term detour has ended. It is important that returning workers choose to commute into downtown without driving alone to avoid increasing daily congestion and to help keep freight moving.

Bridge construction is wrapping up this week, but we’ll continue working on related improvements now that there is less detour traffic on nearby streets. This work includes replacing a traffic circle at Yale Ave N and Aloha St with a permanently raised intersection, and building a new traffic signal at Aloha St and Eastlake Ave E.