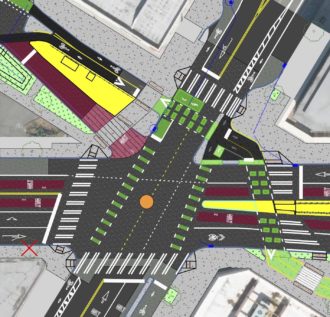 The latest design for Madison/12th/Union is much improved and rather innovative.

SDOT is hoping to begin construction on its Madison Street RapidRide G project in 2020 with service set to start in 2022. That assumes they get the Federal grant they need for the $121 million project. Capitol Hill Seattle reports that the project is still rated well on the FTA’s Small Starts Project list, but you never know what will happen with the current Federal administration.

The project team is hosting a series of open houses and tablings starting this week. You can also submit comments via their online open house.

Though the bulk of the project is about transit, of course, there are some great bike elements. There are also a couple spots where the project (or a complementary SDOT project) could help complete some key bike connections.

Unlike loading a bike on the front of the bus like usual, these special buses will have four spaces inside that are accessible from the rear doors. Riders can pay at stations rather than the front of the bus, allowing them to enter via any door. And the raised bus stop platforms should make it easy to roll a bike inside.

Since the Madison bus will climb some of the steepest streets in the downtown and the densely populated First Hill as well as a very steep section of between Madison Valley and 23rd Ave, this route could be quite useful for people looking to use it as something of a bicycle elevator.

Unfortunately, those same steep climbs are also responsible for the biggest bummer of the latest design concept: The buses will be diesel rather than electric. The city had trouble finding a company that would make these custom trolly buses, which is a huge bummer.

The project will redesign Spring and Madison Streets downtown, including a mostly-protected bike lane on the left side of Spring from 1st to 9th Ave, connecting the waterfront to First Hill. This is a steep climb, for sure, but sometimes it’s the only real bike route option. Your options for getting to First Hill are pretty much all steep or are very round-about, and a comfortable bike lane makes tackling such climbs for pleasant. Plus as e-bikes become more and more popular, steep routes like this will likely see more use.

There are some sections where the bike lane is paint-only, including a couple door zone bike lanes. Obviously, this is not optimal, but it is better than it was in 2016. Here are the Spring Street plans:

This is the most exciting update since the previous iteration of the design. This intersection is awful today. It is really big and confusing, and it has a very poor safety record for all users. It’s also the intersection of two important bike routes with bike lanes: 12th Ave and E Union Street. Today, the 12th Ave bike lanes just sort of drop, and you have to mix with right-turning traffic and bike across this large area hoping that anyone trying to turn left sees you. It’s not a good experience. People biking on Union Street, on the other hand, don’t have an obvious way to get across at all. Some people bike through the crosswalk and wait in the green bike boxes painted in the right-hand lanes of busy Madison Street. Others hop on the sidewalk. Neither option is comfortable.

The latest plan here dramatically redesigns the intersection, making it tighter and simpler for people driving and providing a continuous biking path that keeps people on bikes off the busy sidewalks. The design now only allows transit (Metro’s Route 2 bus) and bikes to continue west on E Union. It also creates a large bulb-out on the northeast corner to create more sidewalk and protected bike lane space. The result is that people walking and biking will have more space to maneuver through or wait for the signal and significantly shorter distances to cross, a key factor in safe intersection design. 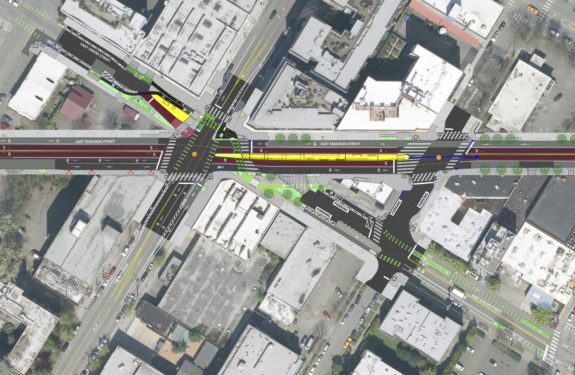 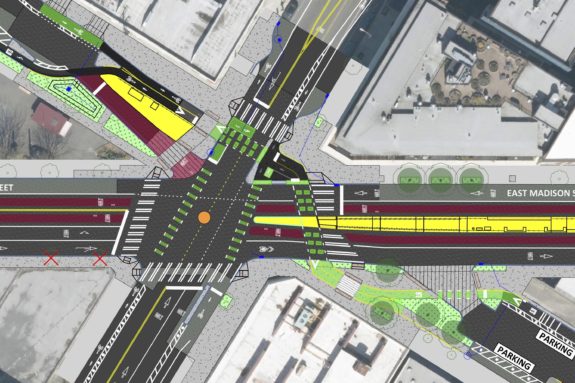 This design is unusual, sure, but it’s an unusual intersection. This was a huge challenge to design, and it looks like the team has done a great job. I can’t wait to see it in action.

This project will connect well with the city’s 2019-20 Union Street protected bike lane project, which will go to MLK Way (hopefully that team can be half as ambitious with those intersections as this team was here).

The Madison project is also stopping just two blocks short of reaching the Broadway Bikeway. Between this improvement and the other Union Street project, SDOT should find a way to make sure they complete the connection to Broadway by the time this Madison redesign opens. 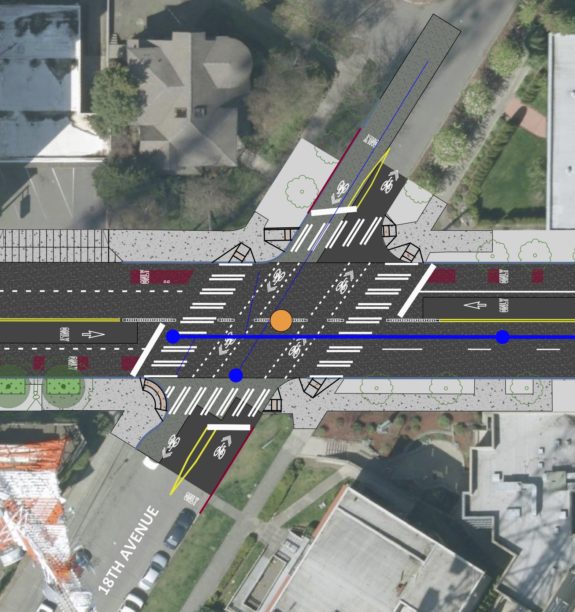 The Madison project with also complete some a quality neighborhood greenway crossing at 18th Ave near the top of the hill. This sets the stage for the very promising “Central Ridge” neighborhood greenway route from Judkins Park to Volunteer Park. This route stays on top of the hill, creating a surprisingly flat route through very hilly parts of the Central District and Capitol Hill (from south to north it follows 20th, 19th, 18th, 17th then 16th Avenues, turning as needed to stay on top of the hill). Crossing Madison is one of the big challenges for this route, so a new signal and crossing at 18th is a big deal. 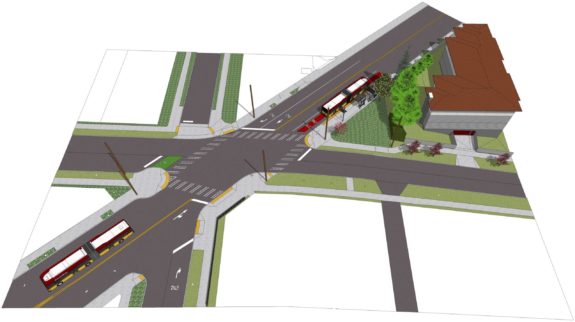 There’s still no direct way to cross the “bottleneck” near the Bottleneck Lounge at Madison/24th/E John Street, though new ADA-compliant curb cuts will make it easier for people to use the crosswalks, which have also been tightened up a bit thanks for a significant curb bulb on the south-western corner.

The green markup is mine, showing where Bicycle Master Plan elements are missing from the design. 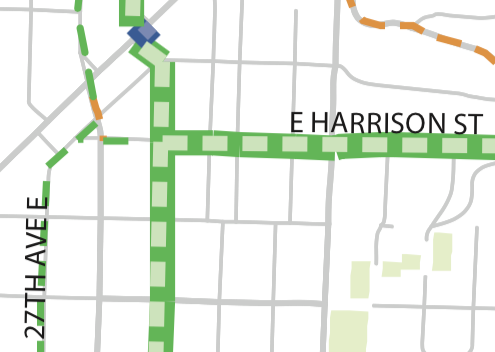 The end of the line needs some work, still. But, honestly, it’s not too far off. There are three smallish issues here.

There’s room to work with here, so I think a solution shouldn’t be too hard. Designing a space for people on bikes to turn left from Arthur is probably the single most important detail to add since removing that turn would make things worse than they are today. This also feels like a missed opportunity to help people get from the 27th Ave greenway across Madison to 28th Ave and the Lake Washington Loop bike route. The painted bike lanes on MLK for this short block as noted in the Bike Master Plan would be helpful. There are also more ambitious options for making this connection, though I’m not sure how much the project team can add this late in the process.

Notice anything else in the latest plans? Let us know in the comments. And definitely leave feedback either in person or via the online open house.