Mayor nominates Sam Zimbabwe to be next SDOT Director 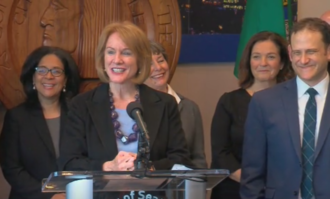 Mayor Jenny Durkan has nominated Washington DC’s Sam Zimbabwe to be the next Director of SDOT, emphasizing his experience in project delivery and multimodal urban planning during a Tuesday press conference.

If the City Council confirms him quickly, Zimbabwe could be on the job in the middle of January. That means he will get the keys to his office just as the city tries to adjust to the permanent closure of the Alaskan Way Viaduct and its downtown freeway exits.

“I’m a multimodal kind of guy,” he said, noting that in DC he mostly takes the train to work but sometimes bikes or drives. He has previously worked on transit oriented development and DC’s streetcar, which had troubles of its own. And, of course, DC has been a national leader in building protected bike lanes and growing bike and scooter share.

“As more people feel like they feel safe and comfortable taking care of some of their daily needs with a bike, the less divisive the bike questions have become,” he said.

Zimbabwe is stepping into a pretty tough spot. SDOT has had a terrible year. Staff morale is low, and the department has been massively underdelivering on promised and planned projects. As we reported earlier this month, the department has nearly stopped building bike lanes, managing to complete just a tiny percentage of the bike lane miles they had planned in 2018.

Being leaderless for the past year has been hard on the Department, which has gone through two interim Directors and has seen a lot of changes at the Deputy Director level. So having a Director should hopefully help SDOT get back on its feet.

But having a good Director in place is only part of the solution. Mayor Durkan also needs to empower the Director to make bold decisions even if there might be political pushback. The SDOT Director answers to the Mayor, so they can only be as bold as the Mayor will allow. Any urban transportation project that challenges the status quo is going to get pushback. But the status quo is not working now and definitely will not work in the future are the region grows.

There are also a lot of people in Seattle eager for change and ready to support bold action. So while making the right choices to prioritize walking, biking and transit will receive pushback, the mayor and SDOT Director should know that there are also people ready to celebrate those choices. Sometimes it seems like fear of angry pushback makes leaders forget that many other people are ready to support them.

Because of all the delays in 2018, there is a huge backlog of planned and funded projects waiting to get the green light. That’s a challenge, but it’s also great opportunity for a new Director to really make an entrance and get a lot done quickly. Many of those projects are bike lane connections to and through downtown, which has enormous potential for unlocking new bike trips for a lot more people.

2019 is set up to be a big year for transportation in Seattle. It’s going to be messy. Traffic patterns are going to shift, and a lot people’s habits are going to change. This is an opportunity to invest in the city we want to be and make big steps in that direction in a short period of time.

Founder and Editor of Seattle Bike Blog.
View all posts by Tom Fucoloro →
This entry was posted in news and tagged jenny durkan, sam zimbabwe, sdot. Bookmark the permalink.