Few bike improvements in the city could have a bigger impact than a safe, comfortable and fully connected bike route from the Pike Place Market to Broadway. And due to the grade of First and Capitol Hills as well as I-5 cutting off many streets, Pike and/or Pine are the only options to make this connection.

These streets are already very popular for people on bikes despite their insufficient or lacking bike lanes because they are the only real choices for people living in large swaths of Capitol Hill, First Hill and the Central District. Being packed with destinations helps, too. Since most people have no interest in biking mixed with car traffic, connecting 2nd Ave’s protected bike lanes to the Broadway bikeway has enormous potential to connect a lot of homes, businesses and destinations.

More than 150 people attended a late October community workshop organized by Seattle Neighborhood Greenways, Capitol Hill Housing and the Capitol Hill EcoDistrict. They provided a lot of feedback on the city’s effort to complete this connection by the end of next year. But the organizers want to make sure the opinions of folks who couldn’t attend are also included, so they put together an online survey.

After considering the realistic options, organizers determined that the lanes will most likely go both ways on Pike Street from Broadway to around Melrose, then switch to westbound on Pine and eastbound on Pike through downtown as outlined in the Pike Pine Renaissance plan. 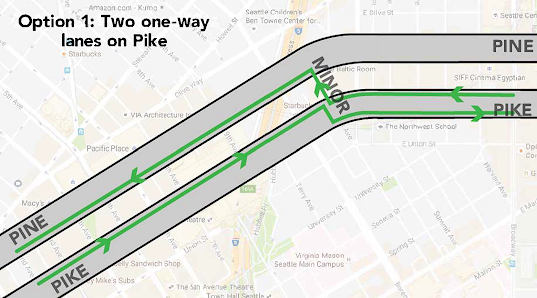 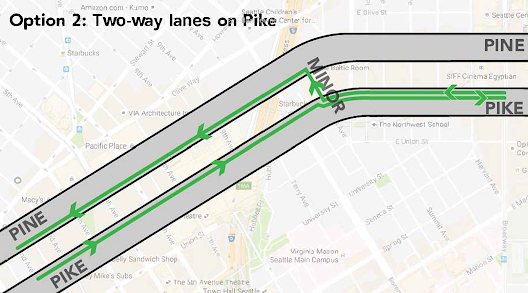 The second question is about the transition where the streets curve near Minor. Which street is the best option for routing people headed westbound over to Pine Street? Minor, Melrose and Bellevue are pretty much the options available. 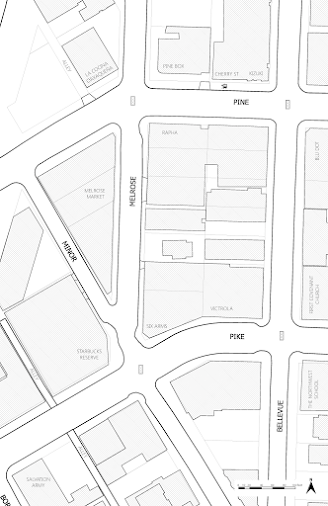 The existing bike lane on Pine Street downtown, installed a year ago, is terrible. There’s just no way to sugar coat that. Forcing people biking to mix with car traffic through the brick section near Westlake Park ruins this bike connection. The Pike Pine Renaissance plan depicts this bike lane remaining in its current flawed state, but this does not achieve the basic goals of a protected bike lane connection. A route is only as comfortable as its most stressful section, and mixing with car traffic through the brick section pretty much negates the benefits of the bike lane on the other blocks.

So while this survey does not address this issue, the city needs to make a choice. Are we going to redesign the brick section to create a continually-protected bike lane on Pine? Or do we need to move the westbound bike lane to Pike Street? Either option could work, but we must do one of them.

One possibly great option would be a two-way bike lane on the north side of Pike Street from Pike Place Market to Broadway. This would definitely be the most intuitive route because it is consistent and direct the whole way. In fact, a lot of people already treat the Pike Street bike lane as a two-way today, suggesting the demand is there. This option would also have basically no transit conflicts.

SDOT could then remove the flawed Pine Street bike lane downtown, but they should keep the pre-existing painted bike lanes on Pine Street east of 8th Ave for the sake of business access and because there’s no benefit to getting rid of them. I imagine that even with a quality bike lane on Pike, some confident riders will still choose to bomb down Pine Street because it is just so fast if you feel comfortable mixing with car traffic. People who want to go fast downhill might not like riding in a two-way bike lane. And that’s OK. Having choices is a good thing.

More details about the survey from the community organizers:

We were thrilled that more than 150 community members representing a range of perspectives joined us on October 25th at the Pike/Pine Protected Bike Lane Community Design Workshop to share their thoughts on street design. Even better, we heard from many that this community-driven model should be adopted by the City for all major projects. We will share our lessons learned in the hopes of making that possible.

We heard you. As we assemble our analysis, key themes have emerged. Participants expressed the importance of safety for all users, of clearly marked and logical bike routes, of plentiful loading zones for freight and for people, and the challenge of balancing competing needs.

See group-designed maps and suggestions as well as photos from the workshop.

Next Steps
To ensure that as many community members as possible have the opportunity to provide feedback, we will continue direct outreach through the end of December. In January, we will share our summary findings with the Seattle City Council, SDOT staff, and you!

Take our survey to share your thoughts on bike lane location and how to balance other uses of the street. We’ll include your comments in our advocacy and share them with City planners and officials. Share the survey with anyone you think might be interested!