Posted on September 27, 2018 by Gordon Padelford

Editor’s Note: Seattle Bike Blog reported yesterday on newly-released 2017 American Communities Survey data that estimates that the number of people biking to work is declining in Seattle. In response, the folks at Seattle Neighborhood Greenways wrote this guest post looking at the start-and-stop construction of a useful bike network in our city and discusses where we can go from here.

The number of people biking to work in Seattle has not been growing. This is disappointing, but it is neither surprising nor is it an inevitable trend.

But safety is the number one reason they choose not to.

The reality is that Seattle’s bicycle routes are still fragmented, inconsistent, and dangerous. We need quick implementation of a large-scale, connected network of safe, protected routes in order to see meaningful change in how people are choosing to get around. 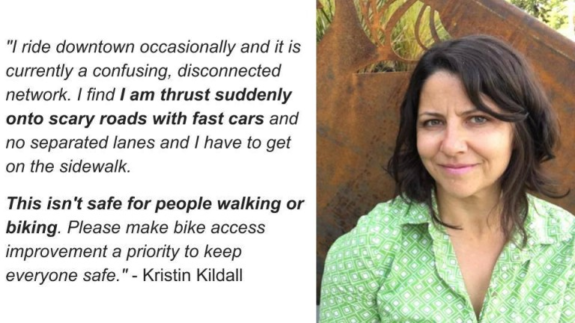 After Sher Kung was tragically killed by a driver on 2nd Ave in 2014 the city acted quickly to build the first protected bike lane in downtown Seattle, but progress since then has been lethargic. In 2016, former Mayor Ed Murray put the Basic Bike Network on indefinite hold.

Seattle Neighborhood Greenways pushed back against this delay. Led by family bikers, we filled City Hall holding signs saying “My Family Bikes” and “Safe Streets Now,” and chanting “We can’t wait!” As a result of these protests, planning for the Basic Bike Network moved forward. 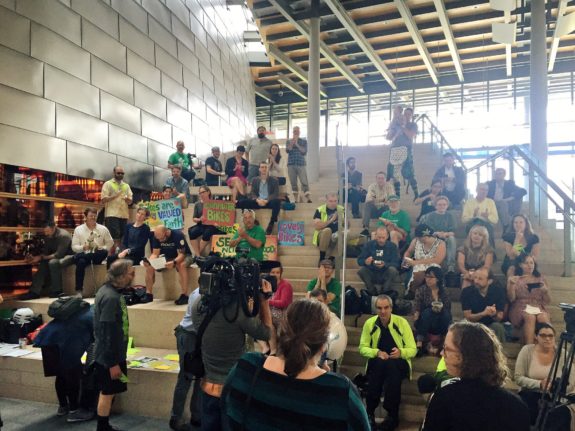 Former Seattle Neighborhood Greenways Executive Director Cathy Tuttle addresses a crowd gathered in May 2016 to urge city leaders to treat traffic violence like the public health emergency it is.

When Mayor Jenny Durkan’s administration took over, they delayed the Basic Bike Network again. And again, a groundswell of caring people joined us to push back against the delay by emailing, calling, and taking to the street:

In response, City Council rose to the moment and passed a resolution to finally extend the disconnected 2nd Ave protected bike lane to the Westlake trail, Capitol Hill, and International District by the end of 2019. 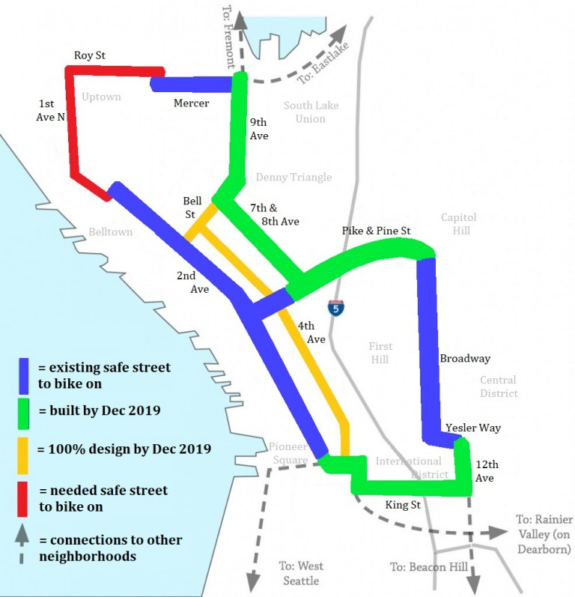 More work remains to be done. We need to complete the Basic Bike Network for Uptown and the new arena, and connect it to the rest of the city. Seattle Neighborhood Greenways has been leading the charge by pushing for solutions that work for Uptown, listening to the Chinatown-International District community, and doing extensive outreach on Pike/Pine.

But even as we work to make it easy to commute by bike, we need to remember that getting to work only represents 25% of our daily transportation needs. We also need to make it convenient and comfortable to bike to the store, to see friends, to school, and more. That’s why in 2016 we worked with our neighborhood chapters to envision a system that connects every growing neighborhood (the map is not to scale). 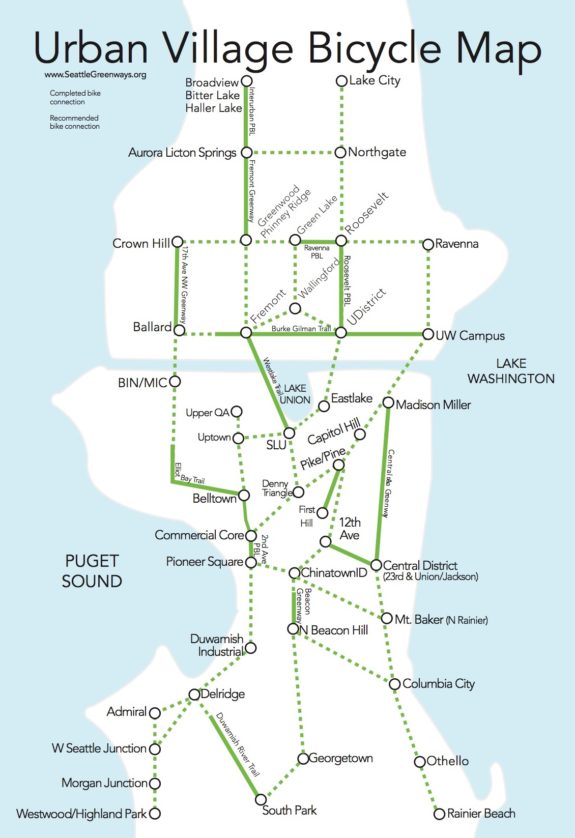 Piece by piece, our grassroots neighborhood-based chapters are bringing this vision to reality because people like you are rolling up their sleeves all over the city:

There are no shortcuts to make biking in Seattle welcoming, comfortable, and convenient for people of every age, language, ethnicity, gender, race, ability, and level of wealth. Changing our streets and transportation system to reflect our values and needs requires on-the-ground advocacy and community-building in every neighborhood — work that our staff and volunteers do everyday. But to win, we need everyone who cares to be a part of this movement.

Here are four ways you can join: