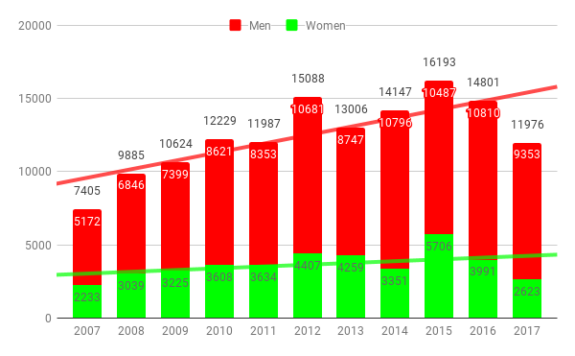 The latest Census survey does not look great for bike commuting, at least as the primary mode that people use to get to work on an everyday basis. The data is especially harsh for women biking to work, a count that has seemingly plummeted compared to recent years.

The annual American Community Survey asks residents which mode of transportation they used most to travel to work “last week.” So this is not a measure of total biking, only bike commuting. And there is no accounting for mixed trips, where someone bikes (or uses bike share) to connect to transit or for people who bike some days but not others. And by asking “last week,” a response will be very weather dependent. So, for example, many of the people who started biking to UW Station when it opened in 2016 would be filed under public transit, not biking.

The survey comes out annually, and the data released this week is from 2017. The data can vary quite significantly from year-to-year, so it’s typically not a good idea to take a single year of data too seriously until you see a multi-year trend. For example, we had a very positive survey in 2012 that, after looking at the trends, was probably an overestimate (perhaps 2015 as well).

I am similarly a bit skeptical of the 2017 numbers, which seem almost impossibly low and don’t seem to match up with the Fremont Bridge numbers. Those counts — which include all bike trips, not just commute trips — have been fairly steady: 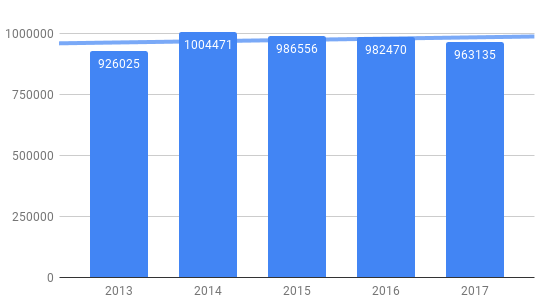 But the 2017 drop is statistically significant. So while I suspect the extent of the change is a bit exaggerated, it can’t be ignored. This is especially true for women (note that the survey only includes a binary gender response, an issue the Census Bureau needs to address).

In recent years, the apparent growth in Seattle bike commuting came mostly from women. There was such an increase that our 2016 American Community Survey story was focused on how women were leading the city’s biking boom. Well, the latest survey shows a dramatic reversal of that trend. But I don’t believe there are truly half as many women biking to work today as there were in 2015 because transportation modes rarely ever shift that quickly. I suspect the 2015 numbers were a bit inflated and the 2017 numbers are a bit deflated, perhaps exaggerated thanks to the wettest winter in recent history as the Seattle Times’ Gene Balk suggests (the Fremont Bridge counts show a big decline during the winter of 2017, but counts bounced back up in spring and summer). The ten-year trend line is still positive, and Seattle’s position on the list of big U.S. cities with the highest bike commute rates remains the same: 5th.

But any downward movement should be cause for concern and a wake-up call for the city, bike organizations and communities. Whatever happened in 2016 and 2017 didn’t work. Obviously, city leaders need to stop delaying work to build connected and comfortable bike routes. But Seattle also needs new ideas, new voices and new energy to help grow communities that bike and create exciting and inviting ways for more people to plug in and learn the ropes of bike commuting.

Biking in Seattle, especially in the dense employment centers downtown and in South Lake Union, has gotten less comfortable in recent years, not better. Major bike routes have become construction zones that almost never include separated bike lane detours. 7th Ave has been a complete mess, and there is no good alternative route for this vital connector street. Both Dexter Ave and 9th Ave have been stressful construction zones for years. The waterfront has been a stressful mess of freeway construction hell, which significantly impacts anyone headed from Interbay, the Duwamish Valley and West Seattle. And Southeast Seattle, well, those routes have been as bad as ever.

The result of all this is that biking to and through downtown feels less safe and comfortable than it did in 2015 and maybe even earlier. And plans to improve these conditions came to a screeching halt in 2016 and 2017, prompting protest at City Hall and concerns that bike commuting cannot grow if the city does not connect neighborhoods to and through our city’s biggest employment centers.

The 2nd Ave protected bike lane remains an unconnected oasis of reasonably comfortable biking, but you still need to travel through some tough construction site detours and streets lacking adequate bike infrastructure to get there. There are a lot of people who have founds ways to make it all work, but Seattle cannot reasonably expect that closing bike routes would not negatively impact the number of people biking. If the axiom “If you build it, they will come” is true for building good bike routes, then “If you block it, they will stop coming” is probably also true.

Recent additions to the downtown bike network, like the extension of the 2nd Ave bike lane through Belltown and bike lanes on stretches of 7th Ave, are not reflected in the 2017 data, since they opened around the 2018 New Year. And bike share is only somewhat represented, since private companies did not start operating until July and didn’t reach significant numbers of bikes on the streets until later in the year and into 2018.

The 2017 data is overall a continuation of a good trend in Seattle transportation, even if the biking numbers aren’t great. Drive alone trips continued to fall as a percentage of all commute trips, reaching a modern low of 47.2 percent. Transit registered its biggest year yet at 22.9 percent, perhaps accounting for some of the decrease in biking (that could be a good topic for further study). 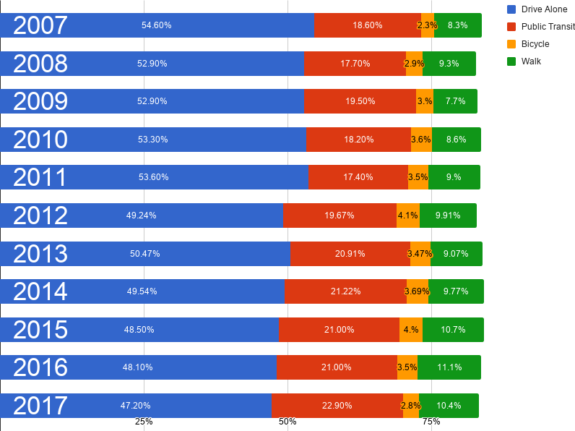 The remainder of work trips happen by some other mode, including telecommuting, taxis and carpooling. Data from the American Community Survey.

There may also be a larger force impacting bike numbers: The economy. For example, there seemed to be a boom in biking during the recession as people looked for cheaper ways to get around, and that trend may be reversing or stalling nationwide. But Seattle’s economy has been growing much faster than most places in the country, and median income and the cost of living are both rising fast. Nationwide, people in the lowest income bracket are the people most likely to ride a bike. So it could very well be that bike commuters are getting priced out of the city or out of the city’s more bikeable neighborhoods faster than new bike commuters are added (this is also a good topic for further study).

This feels like a turning point for biking in Seattle. Lots of projects are in political limbo due to lackluster excitement for them in Mayor Jenny Durkan’s Office, there are major changes underway at Cascade Bicycle Club and an anti-bike lane backlash seems to be getting more organized (one group has even formed a political action committee).

At the same time, the city has had some wildly exciting experiments with private bike share that has made bikes much more easily accessible and affordable to more people, and SDOT has both the funding and the plans to build a lot of game-changing bike routes if they can just get their shit together and get some political cover.

If you have been sitting on the sidelines, now might be a good time to get involved. Start a new group or organize a new event. Find some friends and start biking together. Help your interested neighbor bike to work. Organize a bike train that serves your neighborhood. Join your local chapter of Seattle Neighborhood Greenways and get involved. And if you do start something, be sure to let me know. Seattle Bike Blog is here to help folks doing cool things spread the word.

Founder and Editor of Seattle Bike Blog.
View all posts by Tom Fucoloro →
This entry was posted in news and tagged american communities survey 2017, census. Bookmark the permalink.