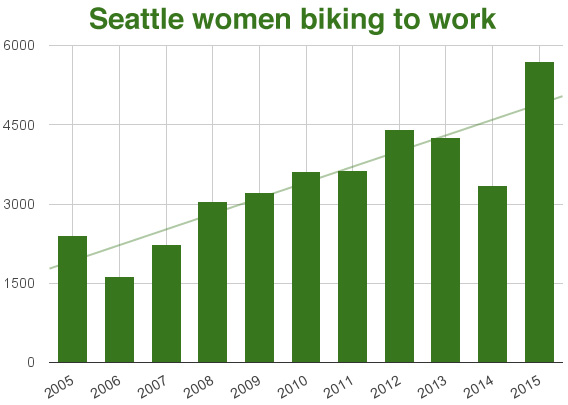 The number of women biking to work spiked in 2015, according to an annual survey by the Census Bureau (**see note at bottom about this data set).

Women now make up 35 percent of Seattle bike commuters. That’s not good enough, of course, but it’s up from 30 percent in 2010.

Biking to work is up 135 percent in the past decade among Seattle residents. Among big U.S. cities, Seattle’s four percent commute mode share is essentially tied with Washington DC and San Francisco for third place. Minneapolis is in second with five percent, and Portland is in first with seven percent, Bike Portland reports. 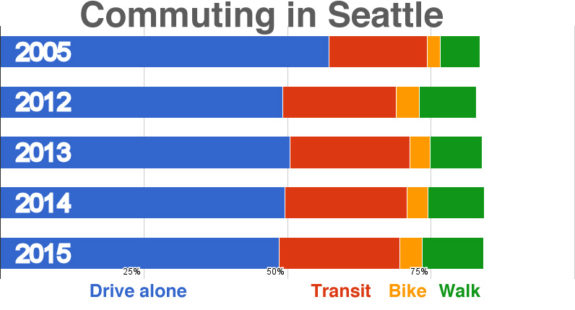 Meanwhile, the number of Seattleites driving alone to work hit a new modern low, making up just 48.5 percent of all commutes. This is particularly impressive since the decline in mode share happened despite a drop in gas prices that started in late 2014. Seattle is a leader in this trend among big U.S. cities, Yonah Freemark reported on Twitter:

On the other hand, walking continued its strong trend upwards, hitting a new high at 10.7 percent. This is likely in large part due to increased housing near jobs.

While job growth in the city means the total number of Seattleites driving alone to work increased 9 percent since 2010, that’s well below the worker growth rate of 20 percent. If trends continue, the city will start adding jobs without adding cars. And if the city takes smart, bold action, this turning point could come sooner than later.

The city is also still heading towards a day when more residents will bike, walk and take transit to work than drive alone. Ten years ago, the gap was 31 percentage points. In 2015, it was 12.8. At that rate, the balance will shift in 2022.

But we can get there sooner with bold action and smart investments in safer streets, more connected bike routes, more and better transit service and more new homes near jobs.

** Take these American Communities Survey numbers with a grain of salt. They are the result of surveys and have a fairly large margin of error. So it’s hard to draw many conclusions from year-to-year changes unless the jump is huge. Rather, the data is more useful if you zoom out a bit and look at it over many years, which is why I include the 2005 data in the charts above. It’s also important to note that the survey only measures commute trips, and people surveyed are only allowed to select the single mode they used for the most distance “last week.” So all those trips to the park or dinner or the grocery store do not count. Neither do trips made by children, people out of work or people who are retired. Perhaps most importantly for Seattle, people who combine biking and transit would likely be counted in the public transportation column, not the bike column. And if you only bike to work once or twice a week, you don’t count either. “Sex” is self-reported in the survey, and only a binary choice is available.