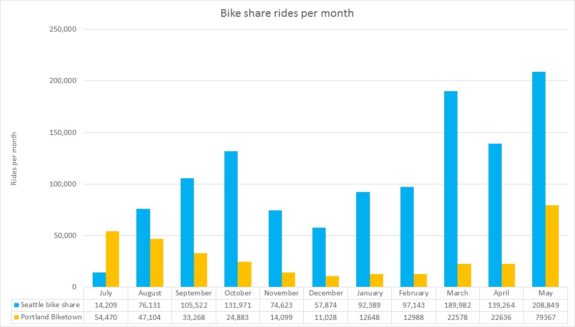 People in Seattle took more than 208,849 bike share trips in May as use of the bikes increased steeply throughout spring. In total, people took 1.4 million rides between late July and mid-June, according to the Seattle Department of Transportation (PDF).

To build on this astounding success, SDOT is updating its permit to allow four companies totaling 20,000 bikes, about double the number on the streets today. And the increase comes with some extra permit fees to vastly increase the amount of designated bike parking space in the city to help make sure bikes are parked appropriately.

The permit plan heads to the City Council Transportation Committee Tuesday. If approved, it is then scheduled to go before the full Council for a vote July 23 and would go into effect August 31. Here’s a look at what is in the new permit rules:

All three companies have already far exceeded the low-income access rules in the expiring pilot permit, which was mostly focused on encouraging companies to include lower-income parts of the city in the service area rather than sticking only to wealthier areas. But right at launch all companies served the entire city limits, vastly exceeding the city’s rules on day one. That was fantastic, but also a sign that the city should make the equity rules a bit more specific.

For example, the new permit would require companies to make sure 20 percent of their fleets are serving “Tier 1 equity areas.” This is similar to a rule implemented by my hometown of St. Louis to make sure the companies are not just focusing redistribution efforts in wealthier and whiter parts of town.

Such a rule is probably a good idea, especially as companies add pricier options like e-assist bikes. But according to survey data, the companies are already achieving impressive racial balance among its users. In fact, the city survey found that people who identified as African American or Hispanic were slightly more likely to have ridden bike share than white respondents, though white respondents were more likely to be heavy users. This one survey should not be used as an excuse to say, “Well, we fixed transportation equity!” and consider the work finished. But it is a promising start to build on. 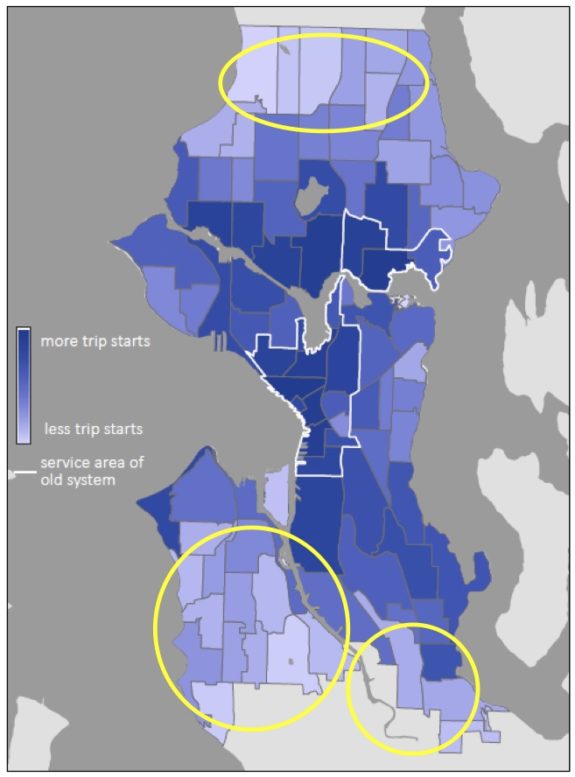 The bikes are seeing much lower use along the north, southeast and southwest borders of the city. But since neighboring municipalities (Shoreline, unincorporated King County, Renton, etc) don’t have bike share, the lower use could also be a symptom of being on the edge of the service area. Lacking bike infrastructure, formidable terrain and a lower density of destinations also could be factors beyond the bike share companies’ control. But it is still worth trying harder to serve these areas and working to develop bike share service agreements with Seattle’s regional neighbors. And if Seattle requires the companies to serve city border areas, the city should do its part by building long-needed bike infrastructure in those neighborhoods.

Several companies have demonstrated their abilities to provide lower-cost rates to people who qualify for government assistance. They have also created methods for unlocking bikes without a smart phone and paying for rentals without a credit card. Lime, for example, recently announced that low-income users will be able to load their accounts with cash through PayNearMe services in any CVS or 7-Eleven. Such a level of access should become the rule.

The city may also want to think of ways to make sure low-cost options remain in service as companies move more and more towards pricier electric versions and potentially away from the $1 pedal bikes that started this whole thing. Which brings us to the next point:

Should Seattle have caps on the number of bikes at all? Would the drawbacks of too many bikes really be worse than the benefits of such ubiquitous access? Experiences in cities that had no caps, especially in Asia, resulted in widely-shared photos of massive bike piles. I understand the city’s desire to avoid that.

But the city needs to make sure not to overcorrect by placing caps that limit the success and use of these services or encourages companies to remove lower-cost (and lower-profit) bikes. Discount programs for people who qualify for government programs are good, but the absolute best way for these companies to serve low-income people is to simply be affordable from the start. $1 for a bike ride is a great price, lower than any other mode of transportation other than walking (and maybe riding your own bike, depending on your bike costs). The city should be looking for ways to keep low-cost pedal bikes in operation even as new innovations come online.

One way to achieve this is to have different caps for different device types. Let’s say ACME Bikes has 5,000 bikes in operation, which is their permit limit. But then they introduce their new more profitable and pricey rocket skates (“Caution: Not effective on road-runners“). They shouldn’t be forced to take bikes off the street in order to add their rocket skates instead. That would be a bad for bike share users. Instead, they should be able to add the skates while keeping their bikes.

Whether to allow the electric kick scooters that are spreading all across the nation is perhaps the subject for another day. The city does not seem to want to include them in this permit at this time. But the permit should be written with the flexibility to easily allow scooters or any other innovation as they hit the market so Seattle can remain at the forefront of this on-demand transportation device movement.

E-bikes should conform to Washington State’s new e-bike legislation. That state law was written to conform with national standards and clarify what types of e-bikes should basically be treated as bicycles. Seattle should follow suit with its bike share rules so that any company with standards-conforming e-bikes can operate here.

This is not just hypothetical. Jump’s bikes are Class 1 e-bikes under the newest state law, meaning the motor is activated by the user pedaling and does not assist beyond 20 mph. But If the city were to set an assisted speed limit lower than 20, Jump would need to modify its bikes to make them slower.

But why should they need to do that? If their business model is to allow rental of a perfectly legal bike, the city shouldn’t micromanage that. Seattle’s car share permit does not limit a car’s top speed, even though the cars in service can go way beyond the fastest speed limit found anywhere in the city limits. Just because a BMW can go 120 mph doesn’t mean ReachNow users are regularly driving 120 on city streets. Likewise, just because a bike can be assisted up to 20 mph doesn’t mean users will be going the full 20 at all times regardless of the conditions. Like any bike, the vast majority of people riding e-bikes go the speed that is appropriate for the situation.

20 mph is perfectly reasonable on a city street, and many people riding non-electric bikes go that speed often. In fact, 20 mph is the slowest speed limit currently recognized by state law. And unlike with car speeding, there’s no evidence that 20 mph e-bikes are causing safety issues that need to be regulated. If it’s legal, the city should allow it. If we’re trying to replace car trips with bike trips, then don’t unnecessarily limit a bike’s legal abilities. Let companies decide what their product looks like. Lime, for example, has gone with a very easy to use and non-intimidating single speed e-bike that cuts out at 15 mph. Jump’s bike is a bit more complicated but has more power. I could see both bikes appealing more to different people. And that’s a good thing.

The city should allow companies to sell advertising on their bikes. We allow advertising on commercial taxis and public transit, both of which use city right of way. We also allow businesses to post A-frame signs in the right of way for a permit fee. So why not ads on permitted bikes? We want these bikes to succeed and be affordable, and advertising is an easy additional source of revenue to offset user fees. Maybe the city could charge an extra fee for bikes with ads and use that revenue to improve street furniture or something relevant to public beautification. But the city should not put up barriers to success for bike share, which is an incredible benefit. 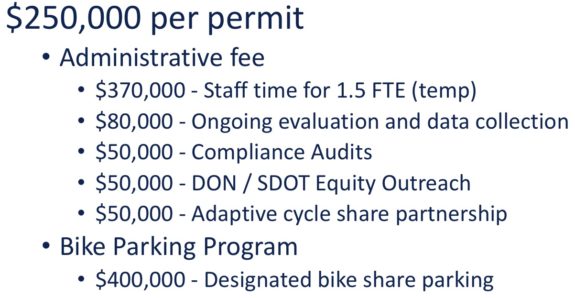 The city is scaling up its hands-on regulation of bike share, and that costs more money. So to fund that work and keep the program cost-neutral for the city, they are proposing an increase in the permit fees. These costs would put Seattle among the most expensive cities in the country to operate a bike share service.

It’s hard to argue against increased permit fees while these companies are getting massive investments (investors led by Google just invested $335 million in Lime, for example). But why do we need this program to be cost-free to the city? These companies are carrying as many as 200,000 trips in a month at low cost to users and with zero emissions beyond the redistribution vans. Our city is willing to invest in programs that help us reach our transportation mode shift, climate change and public health goals. So why are we charging companies a quarter million dollars a year each to help us meet our goals?

The programs SDOT wants to fund sound like worthy and smart investments. It was not so long ago that Seattle was prepared to invest $5 million in a bike share system far smaller than the one we have now. It just seems weird that suddenly the city can’t invest even a small fraction of that on support and access programming. I mean, how much is 200,000 healthy, emission-free trips per month worth to the city? Surely it’s worth something.

In May, bike share ridership was about 50 percent higher than the South Lake Union and First Hill Streetcars combined, and the city is spent $6.7 million to operate those streetcars in 2017. The city is also spending tens of millions (on top of Federal dollars) to build a single train yard overpass in Sodo at the urging of freight-dependent businesses. The cost to regulate bike share and build bike parking corrals is pennies compared to these other investments.

I’m not necessarily saying the city should cancel the fee hike as proposed, but we should be questioning why this successful program is being singled out as one that must be cost-neutral. We don’t make freight companies cover all the costs of freight infrastructure, nor should we. And I do think any company making money on city right-of-way should pay for permits. But building supporting infrastructure — like bike corrals that also help people riding their own bikes — is a perfectly reasonable city investment on its own. It’s weird that a city with so much transportation investment cash is suddenly snapping the coin purse shut as soon as bike share companies have demonstrated early success. Maybe the permit can allow further expansion beyond 5,000 bikes per company to make these fees more reasonable.

Seattle should be doing everything it can to expand bike access right now. These companies are providing an amazing service that the city can build on. We should be aggressively expanding the bike network, for example. Bike share is helping bike lane investments succeed by making it much easier for more people to use the new lanes. This is a virtuous circle, and the more the city invests the better the result.