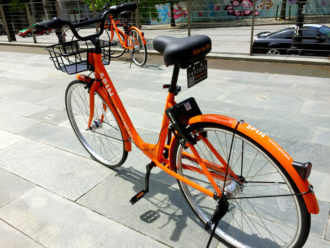 Spin, one of at least ten companies interested in launching in Seattle, recently held a test ride event at City Hall.

Seattle took a major step closer to becoming the hub of private bike share innovation in North America today by releasing a draft version of its bike share pilot rules.

This is our first look at the playing field SDOT is trying to create for a pilot program that will allow private bike share companies to operate on city streets through December 31.

The city’s experience with the pilot will help guide the creation of more permanent rules. Assuming the experience isn’t a total nightmare (it’s hard to imagine lots of bicycles being too terrible), the permanent rules could be created later this year to allow companies that comply to continue operating without interruption. The pilot could also be extended if permanent rules aren’t ready or if more experimentation is needed.

Companies and interested parties have until June 19 to comment on the draft rules. You can view them in these PDFs: Permit Requirements, Insurance Requirements and Indemnity Agreement.

SDOT plans to then issue the final version, and companies can start applying. The city will review each application, which could take weeks. So if a company submits quickly and gets approved, they could have bikes on Seattle streets in July.

Though not all companies will be ready to launch in July, we know of at least ten companies who have expressed interest:

Conspicuously missing are the two biggest global players in the industry: Mobike and ofo. I have contacted both companies and have yet to hear back officially (I have heard at least one of them is interested). But if these companies want to get into the North American market, Seattle is positioning itself to be the point of entry.

These companies are mostly new, but together they have tens of millions of dollars in funding (hundreds of millions if Mobike and ofo are included). Many are hoping to launch nationwide, but Seattle is a rare major market without an existing bike share service. And because the city will likely be among the first cities in North America to create a legal framework for this emerging mobility service, it is likely to be a major testing ground both for these companies individually (Are they prepared for the amount of work it will take to maintain and rebalance their fleet? Are their bikes sturdy enough to sustain longterm use?) and for the concept at large.

The city’s pilot rules don’t try to micromanage each company’s business model too much. The rules require that all bikes meet international bike safety standards, the companies absolve the city of liability, the companies hold adequate insurance policies, and the companies hold bonds the city can draw from in the case of unpaid fees.

The rules also require each company to have local staff to respond to maintenance and rebalancing needs quickly. For example, a broken bicycle cannot be left out for more than 24 hours. A city request for a bike or group of bikes to be moved must be met within two hours. 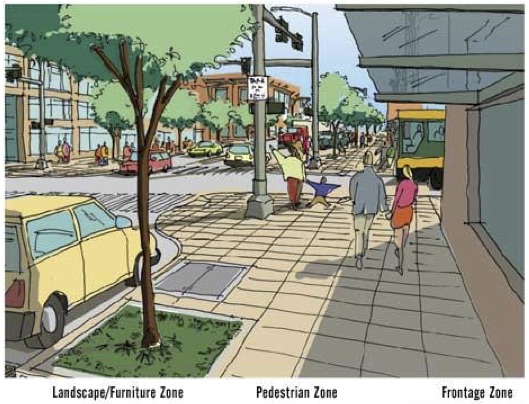 Stationless bikes can be parked in the “furniture zone” of a sidewalk, shown in this image from the city’s Right of Way Improvement Manual.

The rules also outline where stationless bikes can be parked. Basically, they allowed in the existing “furniture zone” outlined in the city’s right-of-way manual. That’s where most newspaper boxes, street trees and bike racks are. Bike racks are also allowed, so the city’s on-street corrals could become hubs for bike share bikes of all brands. A minimum of six feet of walkway must be maintained, and bikes cannot block access to transit stops, driveways, ramps, parklets or street corners. No parking is allowed on blocks where the furniture zone is less than three feet wide.

In other words, don’t park them in the way. This should be obvious, but it’s up to the companies to make sure users know the rules.

The city also reserves the right to designate certain blocks as off-limits for parking bike share bikes should the need arise. Again, we won’t really know until we see the bikes in action, which is the whole point of the pilot.

But SDOT can’t give permission for parking these bikes in spaces outside their right-of-way, such as on UW campus or in parks. It will be up to those entities to figure out how to handle these bikes. I hope they have an open mind about it, because I know the first place I’d ride a bike on a nice day is to a park. Is that really such a bad thing?

The draft rules also try to filter out companies that aren’t serious. For example, companies must bring at least 500 bikes in order to apply, though companies launching with e-assist bikes are exempted from this rule due to their increased costs and service per bike. This is just so the city doesn’t need to go through the work of reviewing permits for a ton of very small companies.

Companies must pay a little over $1,800 in permit and street use fees to cover the permit review time (some of it potentially refundable if review goes quickly). They must also pay $23 per bike. So a company with 500 bikes would need to pay the city more than $13,000 to get up and running. A company with 2,000 bikes would owe the city nearly $48,000. These permits are good for a year, though the details of any permits beyond December 31 won’t be known until the pilot has been running for a few months at least.

While the companies may push back a bit on the fees (of course), the city should recover some funds for private use of public right-of-way. And people still mad about public funds wasted on Pronto (myself included) should note that this new program is set to at least symbolically start settling that debt. The city should let the public know that they’re working to make things right. Our city may end up with an incredible bike share suite of services thanks in part to the lessons learned from the old system’s failure.

Now it’s time for these companies to prove themselves.

Founder and Editor of Seattle Bike Blog.
View all posts by Tom Fucoloro →
This entry was posted in news and tagged bike share, sdot, stationless bike share. Bookmark the permalink.