When SDOT released the 2016 short-term bike plan, I suggested the department “burn it and try again.”

Well, they more or less did just that. The new plan is far from perfect, and it doesn’t make up for lost time resulting from the major cuts in the 2016 plan. But downtown has reappeared, and the plan’s priorities for the next five year are closer to where they need to be: Creating a somewhat connected network of protected bike lanes and neighborhood greenways reaching most corners of the city.

The number of miles remains scaled back compared to the 2015 version and is not on pace to build half the Bike Master Plan by the end of the Move Seattle levy (as was the promise). But the locations of projects were guided through an intensive process with the Seattle Bicycle Advisory Board and neighborhood safe streets groups. There are a lot of dotted lines (meaning the type and exact location of the facility is still up in the air), but it at least begins to look like a network. The maps below are still a draft, but they are nearly final (see the full draft plan, including when each project is planned for construction, in this PDF). 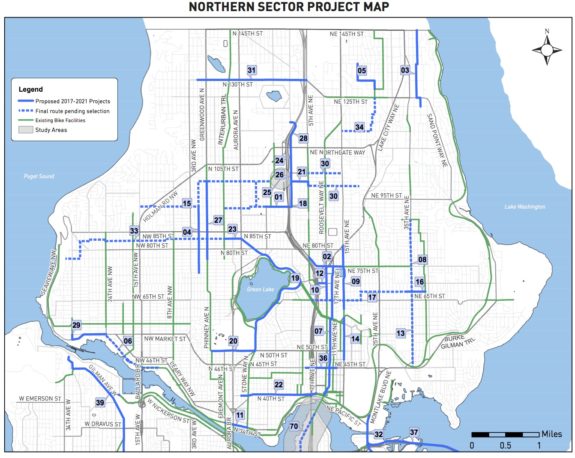 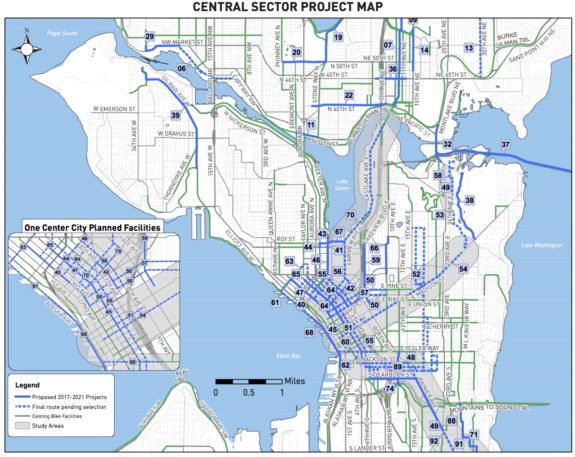 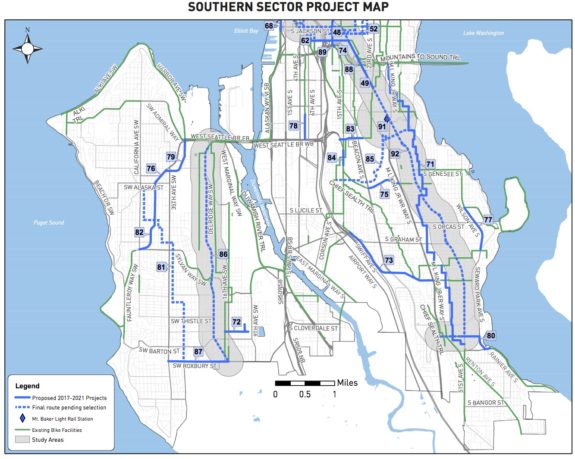 Union Street will be added to the plan after it was cut from the Madison BRT project, which is at least something of a consolation prize for people who were hoping the Madison project would fund all or some of the project. The new plan still includes a dotted line on Madison, which is a placeholder for the promised “parallel” bike route that originally included Union. No bike lanes are planned on Madison.

“We’ve sorted out something that very plainly went sideways,” said SDOT Chief of Staff Genesee Adkins during Tuesday’s meeting of the City Council Transportation Committee. “We figured out quite recently that a protected bicycle lane on Union was neither included in the BMP Implementation Plan nor the Madison BRT project. This was an oversight, and we’re working right now to rectify it and find a way to build a facility for all ages and abilities on Union.”

SDOT staff added during Wednesday’s meeting of the Bicycle Advisory Board that the Union project would likely be a 2019 project, though the length of the project is still up in the air. Whether the Madison project will at least help fund public outreach and planning for the bike lane (if not the construction itself) is also unclear.

“I want to appologize for the unintended confusion that has been a result of our staff in creating a series of iterative maps and plans over several years of the Madison project,” said Adkins.

Getting the Union project back on the city’s priority list is the direct result of people taking action and commenting online, in person and directly to elected officials. But this can’t be the precedent we set for the city’s “multimodal corridor” projects, noted in the plan as dotted lines with wide gray outlines. The bike plan’s connectivity requires these corridors to function.

Watch the presentation to the Transportation Committee here (starts at 48:00):