The network effect: For the 1st time, 2 neighborhood greenways in Seattle have crossed 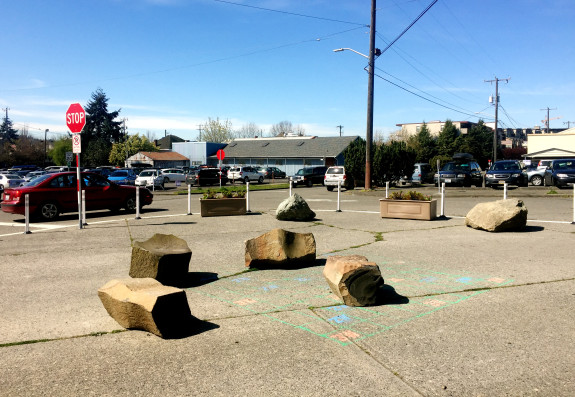 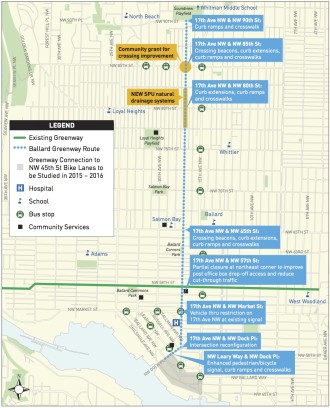 It’s hard to believe it took until 2016, but at least in Ballard neighborhood greenways are starting to form a functional network.

The new 17th Ave NW greenway is very long, stretching from Ballard Ave to Whitman Middle School in Crown Hill. And with the connection to the NW 58th Street neighborhood greenway, every home and destination along the way also connects to the section of the Burke-Gilman Trail leading to Golden Gardens.

The features of the new greenway are mostly familiar at this point: Speed humps, stop signs turned to face cross-streets to give the greenway priority and busy street crossing improvements. It’s an easy gradual climb heading north, setting the stage for a wonderful and flat connection to Greenwood, Green Lake and beyond.

The biggest disappointment in the route is the lack of a connection to the Burke-Gilman Trail from the south end. Instead, the greenway drops you off on Ballard Ave and leaves you navigate the notorious Missing Link on your own. This missing section of trail has been wrapped up in decades of legal wrangling and is currently going through a lengthy environmental review process. Presumably, when the trail is finally constructed, the greenway will connect to it. But that could take a while…

All-in-all, though, this is a well-executed addition to the neighborhood, something that can’t be said for some other recently-complete neighborhood greenways (stay tuned).

Here’s a photo tour of the route, starting at Ballard Ave and Dock Place: 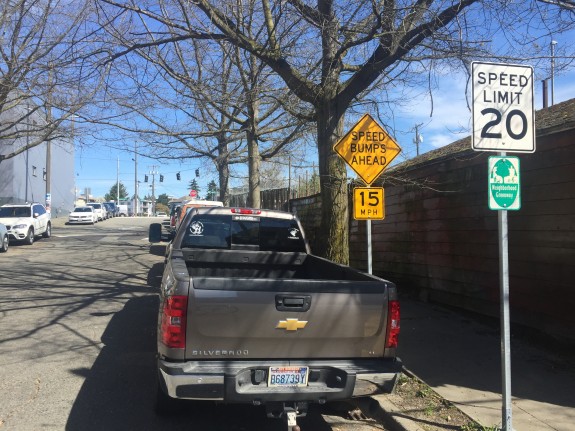 The new park did reduce the size of this intersection dramatically. I’m eager to see how the neighborhood chooses to activate it. 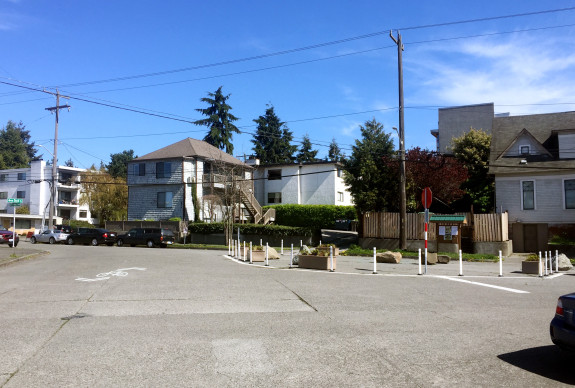 Nearby sign shows the community process that went into the new street park. Years of community help from groups like Ballard Neighborhood Greenways went into making this route a reality. 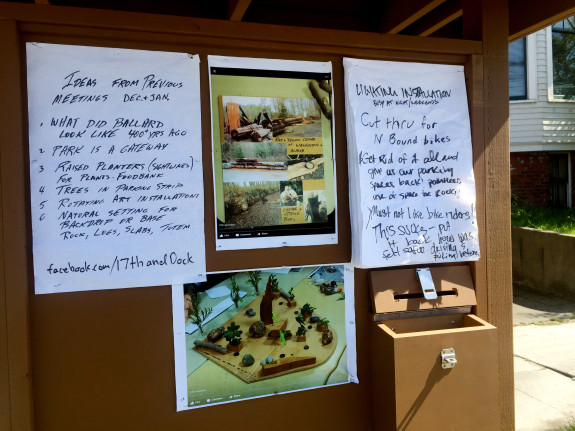 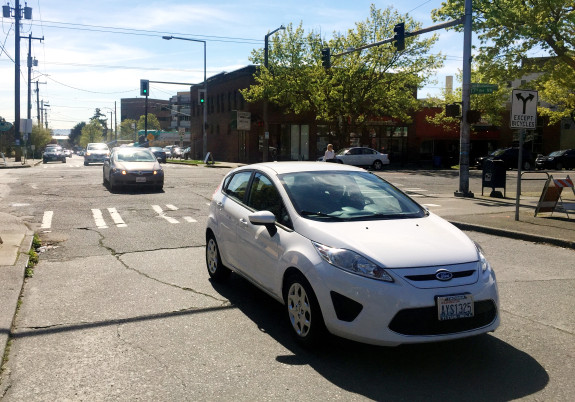 The stretches of the route just north and south of Market Street are among the busiest, so it’s important to divert through-cars at Market. In a perfect world, people would just obey the signs (they really aren’t very confusing). But we’ve tried this enough times to know it will not work.

Give it up and go with a physical roadway change to make sure people don’t clog up our people-focused streets and make them just as uncomfortable as all the other streets.

What kind of diverter am I talking about? This new bike pass-through island at NW 57th Street is a good start. I didn’t camp out long enough to see if people were driving around it, but it seemed pretty clear that only bikes are allowed through. Moving the mailbox to the island to provide driver’s side mail drops was a nice touch. 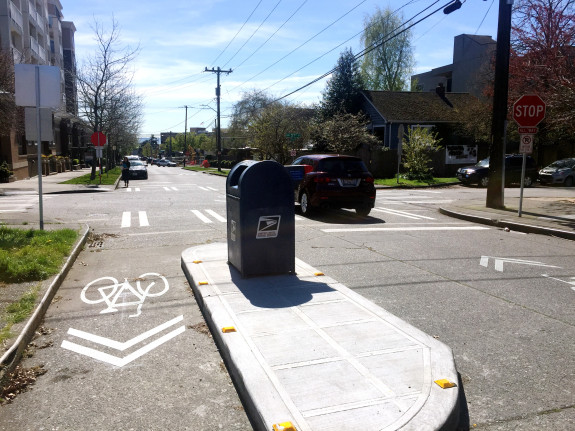 This sign packed with bike routes is awesome! This is what happens when singular routes start connecting to form a network. 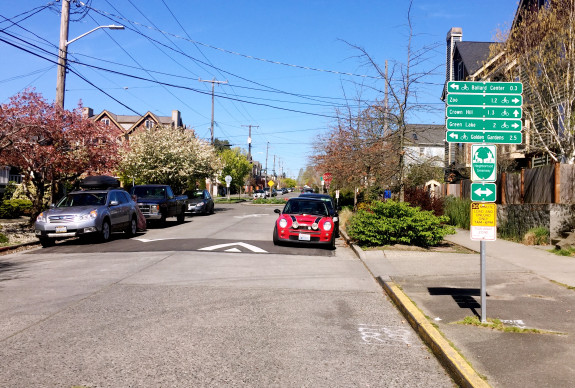 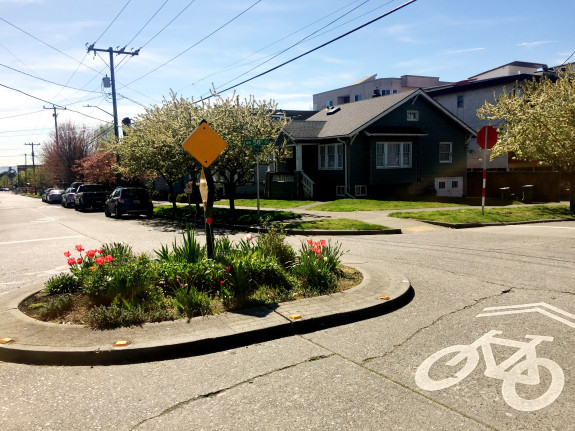 I’m still amazed how well these rapid beacon things work, especially when used at a crossing that isn’t too wide. The bike-level push button is a great touch. I suppose the main question is whether these are truly good enough for the 8-year-old test: Would you feel safe letting an 8-year-old cross here on their own? 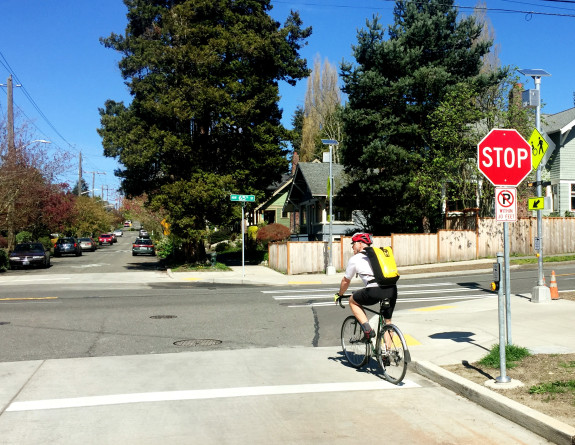 This crossing does not use a rapid flashing beacon, but it does include paint and plastic posts to create very low-cost curb bulbs. The shorter crossing distance combined with the presence of all the posts seemed to slow cars significantly, making this busy street feel much more calm and easy to get across. Again, does it pass the 8-year-old test? If not, it’s close.

With such a low price tag, can we just do this for every crosswalk? 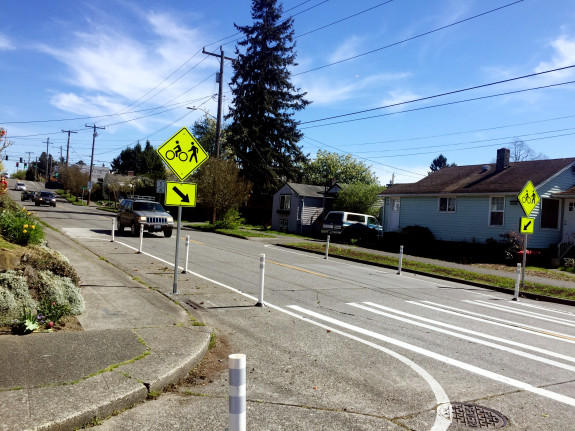 The busy 85th Street crossing got some improvements, but they could have gone further. A crossing island would have been perfect. Or even some of those paint-and-post curb bulbs… 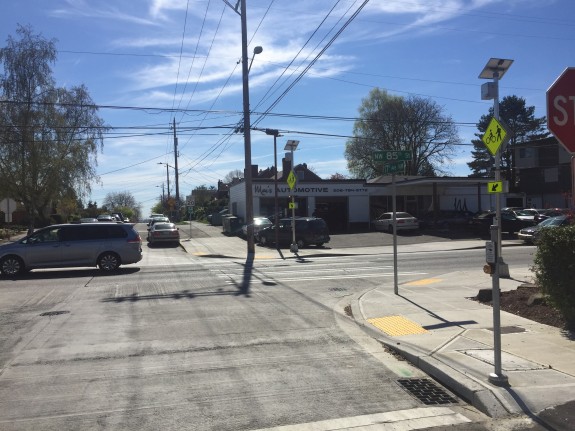 …but it’s definitely better than it was: 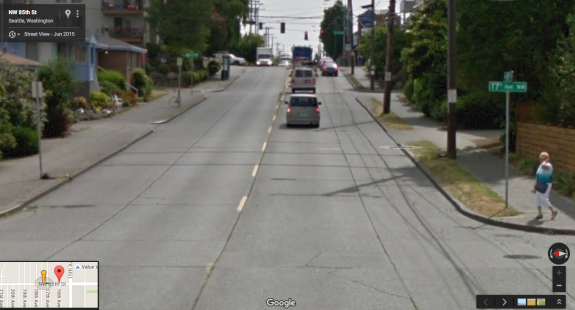 The north end of the route is rather brilliant. At NW 89th Street, the route officially ends right before a new half-block Safe Routes to School path that squeezes between two houses, connecting to Soundview Playfield and Whitman Middle School.

The path is in a constricted space, so it’s not exactly built to full bike trail standards. But it gets the job done. 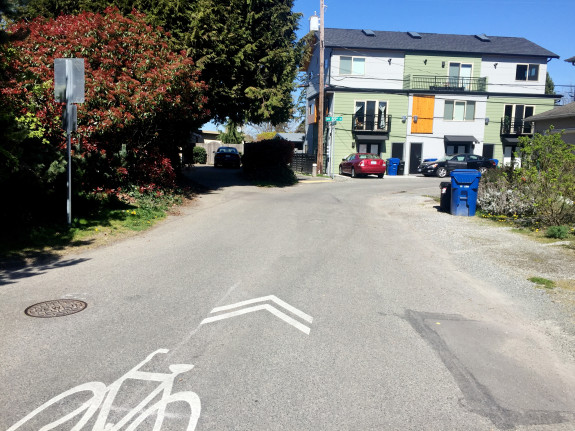 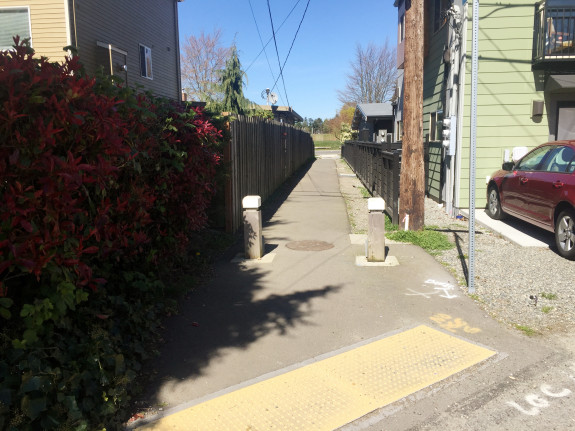 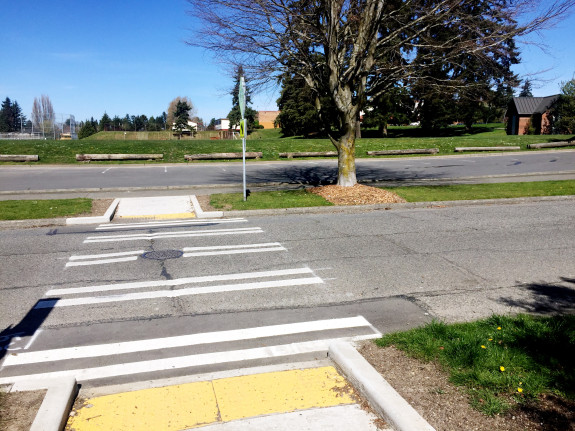 So there you have it. A quality connection from Crown Hill to Ballard Ave. There’s still more work to do in Ballard to create a truly complete and comfortable network of all ages and abilities streets, but this route is a big piece of it. Just good luck getting to the Burke-Gilman Trail.

31 Responses to The network effect: For the 1st time, 2 neighborhood greenways in Seattle have crossed