Saturday, September 7th, 2013 marked the official opening of the new Seattle Neighborhood Greenway in Ballard. The party encompassed just one block, NW 58th Street between 20th and 22nd Avenues NW (with car access as needed), but the Greenway itself runs the width of Ballard from the Burke-Gilman Trail to 6th Avenue NW. It features traffic-calming speed humps, stop signs for cross traffic, and more.

I aided in the celebration by leading a short Kidical Mass ride of 50 people and 2 dogs to the event while a Spokespeople ride brought a group over from Wallingford. Riders big and small had fun getting Undriver Licenses, riding the Dutch Conference Bike from Dutch Bike Co, making smoothies with the Cascade Bicycle Club bike blender, dancing along the A-1 Piano street keyboards, and riding the bike rodeo course. 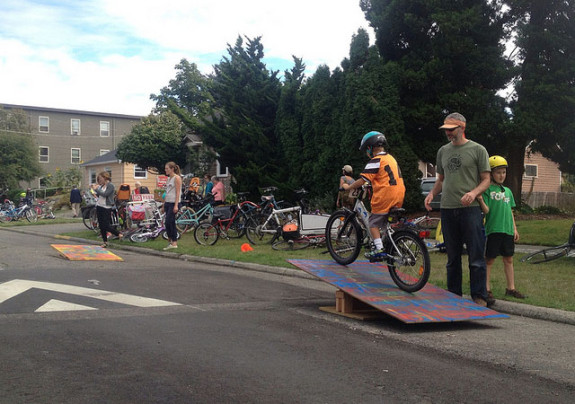 Madi is Seattle Bike Blog’s Family Cycling Expert. She is the author of Urban Cycling: How to Get to Work, Save Money, and Use Your Bike for City Living. She lives in Wallingford and bikes all over town with her two kids in tow. You can read more of her adventures and thoughts on family life on two wheels at FamilyRide.us.
View all posts by Madi Carlson →
This entry was posted in news. Bookmark the permalink.