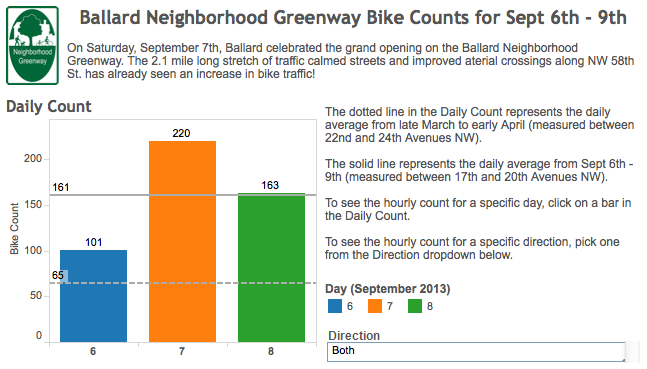 Early counts show that the number of people biking on the NW 58th Street neighborhood greenway in Ballard has already dramatically increased, according to Seattle Neighborhood Greenways.

Before the September 7 greenway opening celebration, usage was already up compared to earlier this spring. But after the celebration, usage remained abnormally high for at least another day. This growth far outpaced the growth in Fremont Bridge trips over the same period, suggesting it is due to more than the better weather.

Clearly, more data is needed to know how long such growth in use is sustained, but it’s certainly promising. Growth like this after a release celebration suggests two things: A: Neighborhood greenways work and people like to use them and B: Public events and celebrations are effective at teaching people about using new ways to get around.

After all, creating the infrastructure to safely cross busy streets and slow motor vehicles to a bike’s pace only goes so far. We also need to encourage people to make the routes their own, and a party might just be the best way to do that.

This, of course, brings us back to the Sunday Parkways idea. Getting a ton of people out biking and walking existing and future neighborhood greenways routes is not only a super fun community activity, it also teaches people where the routes are. Sometimes all it takes it trying a new idea once before it sticks. “Hey, I just biked all the way to the market and it wasn’t difficult or scary!”

Another lesson from Portland’s Sunday Parkways is that it’s not just a one-time thing. They hold the events in different parts of the city every year, and each year the number of people who attend grows significantly. So there’s no reason the Ballard neighborhood greenway parties need to end with the September 7 launch. Let’s keep it up, grow the routes, and slowly transform the way people choose to get around.

Founder and Editor of Seattle Bike Blog.
View all posts by Tom Fucoloro →
This entry was posted in news and tagged ballard, neighborhood greenways, nw 58th st. Bookmark the permalink.