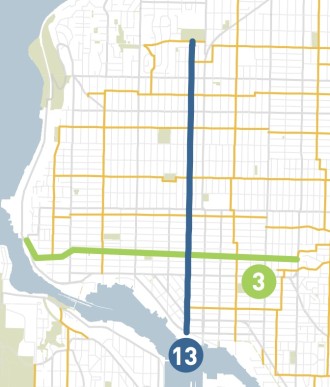 From SDOT’s 2014 neighborhood greenway work plan. Route 3 exists, Route 13 will be studied this year (the exact route could change during the design process)

The city will host its first open house to get community input on a second neighborhood greenway in Ballard, this time a north-south route.

The meeting is 6 – 7:30 p.m. Tuesday in the Ballard High School Commons Room. The presentation starts at 6:30.

The city is considering a route somewhere in the 16th, 17th or 18th Ave NW area that will connect all the way from the Burke-Gilman Trail Missing Link (someday hopefully an actual trail) all the way up to Soundview Playfield near Whitman Middle School in Crown Hill.

The 17th Ave NW neighborhood greenway will also be a chance for SDOT to get some feedback about what did and did not work on the 58th route so they can make sure the new route is even better. 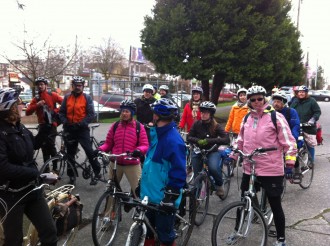 The biggest complaints I have heard about the 58th St route is that the speed humps are not big enough to significantly slow people driving and that the crossings of busy streets like 24th Ave NW and 20th Ave NW do not go far enough to create a truly comfortable experience for people walking and biking the route.

Since the 17th Ave NW route will connect a ton of parks and schools, it should be built with the comfort and safety of children in mind. If a Ballard parent feels comfortable letting their eight-year-old bike on their own along 17th Ave to get to school, then the city will know they have succeeded.

One big unknown is how to best connect to the under construction Burke-Gilman Missing Link Band-Aid route. North of Market, 17th Ave NW (the likely leading route candidate) is pretty calm. But south of Market there is a bit more traffic and some very confusing intersections. And, of course, there is the intersection at Leary Way, which is horrendous and badly in need of a remake:

Last summer one was completed on NW 58th Street. This year we’re evaluating a north-south route in the area of 16th, 17th or 18th Avenues NW from Salmon Bay to Soundview Playfield. We will hold two public meetings to learn more from the people who live, work, shop and play in the area. The first meeting will share traffic data and help us understand where people want to walk and bike and barriers to doing so. At the second meeting we’ll share the results of technical analysis and public comment and the most promising route.