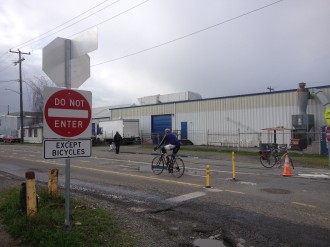 In late December, just two weeks before Mayor Mike McGinn left office, the city began work on a project to improve safety on a particularly troublesome section of the Burke-Gilman Missing Link in Ballard.

While not a complete solution, the project is a Band-Aid for one of the worst sections while the city completes an environmental impact statement for the trail and finishes the lengthy and costly legal battles delaying the project.

The city has changed a stretch of NW 45th Street into a one-way street, using the former westbound lane to create a two-way bikeway. While the new bikeway won’t get people on bikes all the way to the Locks where the west section of the trail begins, it should at least help people get to Ballard Ave and the neighborhood’s commercial center.

But three months after work started, only some sections of are complete. The project has been sitting in it’s partially-finished form for so long that readers have been sending me notes wondering if the city has abandoned the project.

They have not. The delays are due to necessary paving work that needs warmer weather to complete, according to SDOT spokesperson Rick Sheridan:

The project is not yet finished as we need to complete some additional pavement repair followed by striping work. The pavement patching is the key element driving our schedule. The 11th Ave NW and NW 45th St intersection will be repaved, which will make that crossing much nicer for everyone, and we will also repair a portion of the waiting area at the 45th/46th Street intersection where the two-way ends. But to complete this work we need some dry and warm weather. Once that is done we can move forward with striping, extending the two-way bike lane from under the bridge to 46th Street. All of this should be completed next month.

Several readers have reported confused people driving on the bikeway. Here’s the tale from one reader:

I was headed westbound on that stretch last night and was passed by a truck. I chewed him out at the stop sign, and he didn’t believe me that those were supposed to be bike lanes — he hadn’t seen the markings at all, and I don’t really blame him. It’s dangerous.

Here we are in March and it still isn’t done. In fact, given that it’s only half-striped and poorly signed, I think it’s actually more dangerous than it was before the “fix.” It’s just confusing, and this morning at about 8:30am I had the inevitable scary incident. I had a head-on encounter with someone in a pickup who was towing another pickup westbound in the supposed bike-only lane just east of 15th. I pointed to the bike markings on the road as I swerved around him. His response was to swear violently at me out of his open window.

I had plenty of time to react, so I was never really in danger, but it still left me pretty shaken up and angry. But when it comes right down to it, this is the fault of the road design more than anything (though the pickup guy was obviously a jerk too!). If SDOT had actually finished this project when they said they would, and had put in some meaningful barriers to prevent wrong-way drivers from using these lanes, this never would have happened.

In observing the street since the changes were put in place, it certainly seems like fewer people choose to bike in the middle of the train tracks next the road. This was the cause of many crashes, as people exiting the trail look for a place to bike other that in the street, which was marked with sharrows. 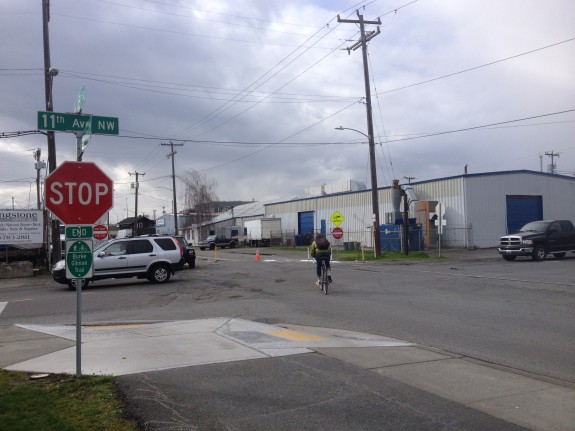 The all-way stop intersection where the new bikeway meets the trail near Fred Meyer is still a bit chaotic. Amazingly, I have never actually witnessed a close call here, perhaps because everyone senses the confusion and pays extra attention. But it is hardly comfortable and would not likely pass an all ages and abilities test.

The first section heading west is largely operational and comfortable: 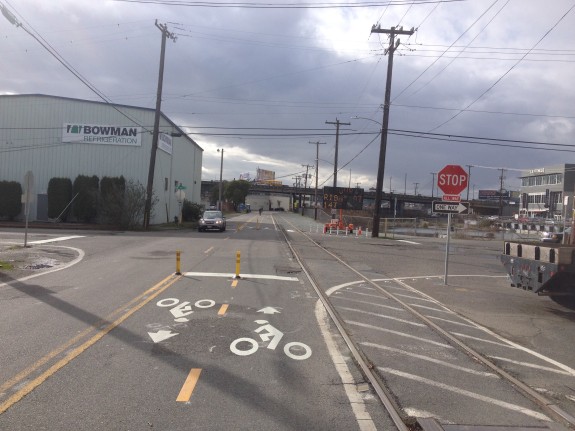 But once you get close to the Ballard Bridge, there is still a lot of work to be done: 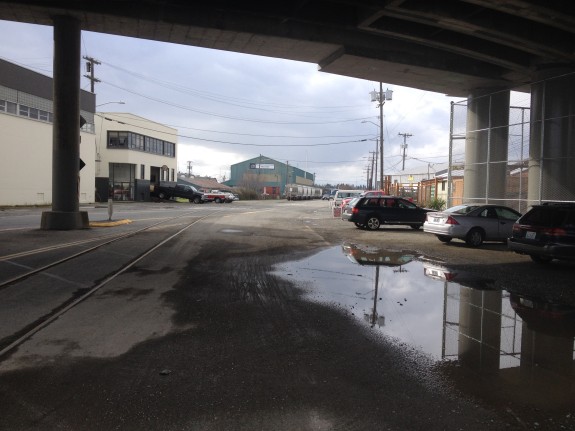 SDOT says work should be complete next month (in time for Bike Month).

Founder and Editor of Seattle Bike Blog.
View all posts by Tom Fucoloro →
This entry was posted in news and tagged ballard, burke-gilman trail, missing link, sdot. Bookmark the permalink.