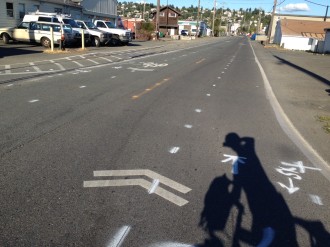 The city’s plans for advisory bike lanes have been scrapped in favor of a two-way bikeway. Photo courtesy of Fred Young

The city will build a two-way bikeway this month in an attempt to increase safety on a notoriously dangerous stretch of the Burke-Gilman Trail Missing Link in Ballard.

Previously-planned advisory bike lanes on NW 45th Street have been scrapped in lieu of a two-way bikeway that the city hopes will be safer. To make space for the bike lanes, the street will become a one-way street eastbound for motor vehicles between NW 46th Street and 11th Ave NW. This is somewhat similar to an idea proposed on this blog in August 2012.

The city’s plans are aimed at making it much easier and safer for people biking to and from the abrupt end of the Burke-Gilman Trail near Fred Meyer to Ballard Ave and the Ballard retail core. If all goes according to schedule, work should be completed before Christmas (best present ever!).

Details from SDOT (UPDATED with slightly revised SDOT release and a map):

Shilshole Avenue Northwest/Northwest 45th Street between Northwest 46th Street and 11th Avenue Northwest is about to become one-way eastbound for motor vehicles, with a separate two-way bicycle lane to the north. The Seattle Department of Transportation is making the roadway change to address longstanding safety concerns.

The one-way eastbound solution comes after collaboration with area businesses. Access to all businesses will be maintained, although some routings will change due to the one-way modification. New signage will direct those heading westbound on Northwest 45th Street, east of 11th Avenue Northwest, to head north to Northwest 46th Street instead.

The original South Ballard Corridor Safety Project called for installing advisory bike lanes and speed humps along Northwest 45th Street. Advisory bike lanes clarify with dotted lines where drivers can expect to see bicyclists within a driving lane. Because this roadway segment is so narrow, one-way motor vehicle travel with a separate bike lane was determined to be a better option.

Map of the planned bike lanes: 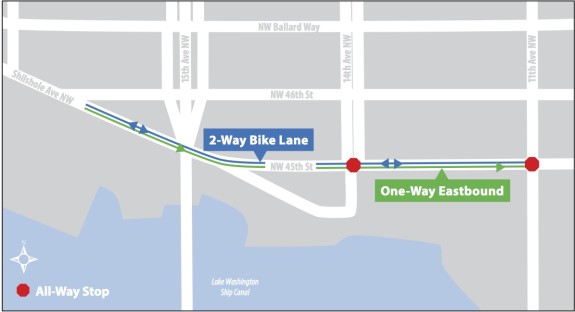 Founder and Editor of Seattle Bike Blog.
View all posts by Tom Fucoloro →
This entry was posted in news and tagged ballard, missing link, nw 45th st. Bookmark the permalink.