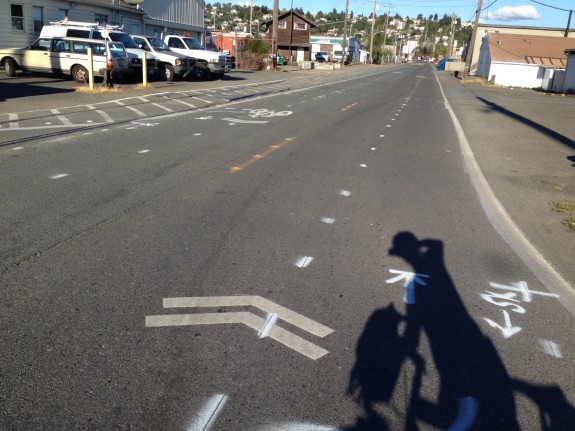 Wait, what are those spray painted lines on NW 45th Street at the east end of the Missing Link?

It’s the beginning of work on the city’s planned Band Aid fixes to help prevent crashes on the notoriously dangerous stretch of road just west of Fred Meyer and the abrupt end of the Burke-Gilman Trail. The city plans its first real experiment with “advisory bike lanes,” what are essentially bike lanes that people in cars are allowed to drive in after yielding to any people on bikes. They are also planning some traffic calming along the stretch and the speed limit will be reduced to 20 mph.

They should be completed in October along with two Ballard Ave intersection fixes, SDOT told us in late July. Shoulder paving work on Shilshole will be completed in 2014 to help people biking along that dangerous street.

Advisory bike lanes are not common in the US, though they are widely used in the UK and other European countries. They are mostly used when a road simply is not wide enough for two general purpose lanes and two bike lanes, as is the case on NW 45th between Fred Meyer and Shilshole.

But on 45th, they will serve a second, likely more important role: They will provide a clear space for people on bikes to ride that steers them clear of the wheel-grabbing train tracks that have claimed so many broken bones and worse.

It is extremely common to see people biking between the railroad tracks next to the road. The tracks are easy to enter and sort of look like a trail, so it makes sense why people would think they should be there. However, the tracks are not easy to exit, and people’s wheels often get caught trying to reenter the roadway.

The city recently painted sharrows in the road to encourage people not to bike in the tracks, but they did not appear to do much to solve the problem (at least according to my anecdotal observations).

I hope these advisory bike lanes do keep people safe because I am sick of getting emails from people who break a bone simply trying to get to the Ballard Farmers’ Market. I am concerned that not everyone will understand how to use them properly since they are so unusual in Seattle, but there’s only one way to find out. Several people have suggested that the street could simply become a one-way street, and the advisory lanes could be actual bike lanes. If the advisory lanes prove to be an issue, perhaps the city could look into that.

Looking beyond NW 45th, advisory bike lanes have also been suggested as a low-budget or temporary solution to bike safety on Lake Washington Boulevard. It could have huge implications on other skinny Seattle roads if they work. Perhaps it would be a good idea to conduct a study to observe how people use them and sample user opinion (people driving and biking) on how safe they feel.

For more information on advisory bike lanes, here’s a handout created by the city of Minneapolis (ignore the bit about parked cars, since there are none on NW 45th): 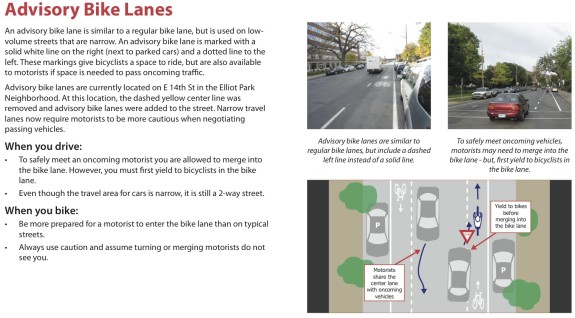