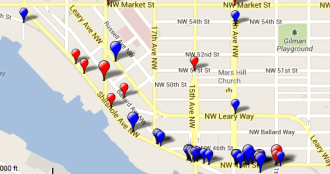 It has officially been a full decade since the City Council adopted plans to complete the Burke-Gilman Trail’s notorious Missing Link in Ballard (so notorious that is now a proper noun). The city is now starting it’s next attempt to break a legal logjam that has blocked its construction for years.

But don’t get too excited yet. This meeting is only to discuss the planned scope of the study, which has not yet begun. It is scheduled for August 8 from 6 to 8 p.m at Ballard High School.

The project has long been funded and has full support from the city government. But exhaustive legal actions by a handful of businesses along the proposed route has kept shovels from hitting the ground to complete the final section of a trail that would otherwise stretch from Golden Gardens to Redmond (and beyond), passing through many similar industrial areas along the way (it is an old rail corridor, after all).

Meanwhile, people biking continue to crash and get seriously injured by dangerous road conditions and railroad tracks through the missing section.

Late last year, city officials held a press conference to announce some temporary small fixes to address some of the more dangerous parts of the Missing Link. We have asked the city for an update on those changes, as they have not yet been implemented.

UPDATE 7/30: Here’s the status on these changes, from SDOT:

We will complete the safety improvements in two stages. The first stage will be operational improvements along NW 45th Street from 11th Avenue to Shilshole Avenue. We will start this work in mid-September and expect it to be completed in October.  NW 45th Street will be signed as a 20-mph roadway with traffic calming and striping changes at the track crossing.  We’ll also make changes at the two intersections on Ballard Avenue for better stop control.

The second stage will involve civil work and we will need to phase this construction in coordination with nearby businesses. The work will address the shoulder area on Shilshole, intersection improvements on 45th Street and shoulder widening along 45th Street. This second stage will be scheduled for next year.

We also suggested that it was time for even more drastic measures to ensure safety. With the EIS process likely to drag on for a long time to come (especially if these businesses continue their legal obstructions), the city should take more drastic steps to create a safer temporary route. Needed improvements (on top of those planned) include protected bike lanes on Market Street between Ballard Ave and the Locks, a safer connection between NW 45th St and Ballard Ave, and changes to Ballard Ave to allow for two-way bike travel along its entire length.

There are likely many small changes that could go a long way to allow reasonably safe travel for people on bikes while the city continues construction of its monumental tower of Missing Link trail study documents. Do you have any ideas? Leave them in the comments below.

Details about the meeting from the city (via Sustainable Ballard):

The Seattle Department of Transportation (SDOT) proposes to complete the “missing link” between two existing segments of the Burke-Gilman Trail. The project will construct a marked, dedicated route for pedestrians and cyclists through the Ballard neighborhood of Seattle, between the intersection of 11th Avenue NW and NW 45th Street and 30th Avenue NW at the Hiram M Chittenden (Ballard) Locks. Construction may include the addition of new and replaced impervious surfaces, landscaping, new and replaced stormwater drainage facilities, driveway improvements, street lighting, wayfinding signs, and traffic controls.

The Missing Link is the last, uncompleted portion of a regional, multi-use pedestrian and bicycle trail system that otherwise travels east from Golden Gardens Park in Seattle to Tracey Owen Station in Kenmore. The first paved section of the trail, from Gas Works Park to Kenmore, was completed in 1978. Additional sections of the trail have been completed incrementally since that time. The Burke-Gilman Trail generally follows the right-of-way of the old Burlington Northern railroad line and connects with other regional trails in Bothell (Wayne Golf Course), Redmond (Sammamish River Trail) and Issaquah (Lake Sammamish Trail).

SDOT originally issued a Determination of Non-Significance for a proposal to complete the Missing Link based on the route approved by City Council Resolution 30583. That DNS was revised in 2011 pursuant to an order from the King County Superior Court requiring SDOT to do additional environmental review of a portion of the route along Shilshole Avenue NW, between 17th Avenue NW and NW Vernon Place (Shilshole Segment). That Revised DNS was reissued in 2012 pursuant to a second order from the King County Superior Court requiring additional design of the Shilshole Segment. On appeal of the Reissued Revised DNS, the City of Seattle Hearing Examiner determined that an environmental impact statement (EIS) should be prepared to address traffic hazard impacts along the Shilshole Segment, specifically those impacts related to truck movements and conflicts with other traffic and trail users. Now, SDOT proposes to prepare an EIS on the entire Missing Link including the evaluation of a broader array of impacts and alternatives.

The Missing Link of the Burke-Gilman Trail is located in the Ballard neighborhood between the intersection of 11th Avenue NW and NW 45th Street on the east and 30th Avenue NW at the Ballard Locks on the west. Alternative routes between those two termini will be considered.

Areas for discussion in the EIS:

As described above, the City of Seattle Hearing Examiner has ordered SDOT to prepare an EIS on the potential traffic hazard impacts on the Shilshole Segment of the Missing Link. Although SDOT has not determined that there will be probable significant adverse impacts from the proposal, SDOT has chosen to expand the scope of its EIS to include discussion of the entire Missing Link, from 11th Avenue NW to the Ballard Locks, and has preliminarily identified the following areas for discussion in the EIS: transportation (including parking, traffic and traffic hazards); land and shoreline use; earth; plants and animals; historic and cultural resources; and economics. Additional elements of the environment may be included based on SDOT’s review of scoping comments.

The EIS will consider a range of alternative trail alignments and designs. The route adopted by City Council Resolution 30583, which generally follows the railroad corridor along Shilshole Avenue NW, as well as a No Action alternative, will be included as alternatives. A reasonable number of additional alternatives will be identified based on suggestions in scoping comments and existing information.

Agencies, tribes and individuals are invited to submit written comments on the scope of the EIS, including areas of the environment that should be discussed in the EIS and alternatives that should be considered. Comments may be submitted by letter or email to Peter Hahn, the SEPA Responsible Official, at the address given below by 4:00 PM August 16.

An open house/scoping meeting will be held on August 8, 2013 from 6:00 PM to 8:00 PM at Ballard High School, 1418 NW 65th Street, Seattle, WA. An opportunity for submitting comments on the EIS scope will be provided.