OMG, do we really need to say this again? Complete the Missing Link already! 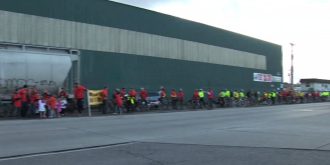 Seriously, I’m not sure how many more ways we can say this. Complete the Ballard Missing Link of the Burke-Gilman Trail!

Tomorrow is the deadline to comment on the scope of the Environmental Impact Statement the city is beginning to put together about the Burke-Gilman Trail Missing Link in Ballard.

Yes, it’s true. A decade after the City Council first approved plans for completing the Missing Link and after years of studies, legal documents, a protest spanning the length of the Missing Link demanding completion of the trail, and likely hundreds of crashes on the still-dangerous Shilshole Ave and NW 45th St, the city is starting on yet another environmental study of the trail project.

And you are once again needed to voice your opinion that the city should complete the Missing Link. Cascade Bicycle Club has created a handy online tool to help you send your thoughts on the scope of the EIS. Do this today because tomorrow (Friday) is the deadline.

For the legalese reasons for the EIS, see the notice posted below. Essentially, the city has repeatedly determined there would be no significant impact from various aspects of the trail, but legal battles have repeatedly sent the city back for more studies. So the EIS is a costly and time-consuming catchall study that, hopefully, will settle things once and for all.

The city does have some small fixes planned for next year, but they are mere Band Aids that don’t solve the core problems that make the street dangerous for the great many people who bike it every day. To truly make things safe, we need the trail. Really, we needed the trail years ago.

While other roads in the Ballard area absolutely need safety improvements — I’m looking at you, Leary Way and Market Street — a bicycle route using those streets would not be the Burke-Gilman Trail and would do nothing to improve the dangerous conditions for people walking and biking along Shilshole and NW 45th St.

So get your support for completing the trail on Shilshole and NW 45th St as planned and funded on record today.

8 Responses to OMG, do we really need to say this again? Complete the Missing Link already!