Ahead of Eastside Trail meetings, sign this petition for an interim trail ‘sooner and cheaper’ 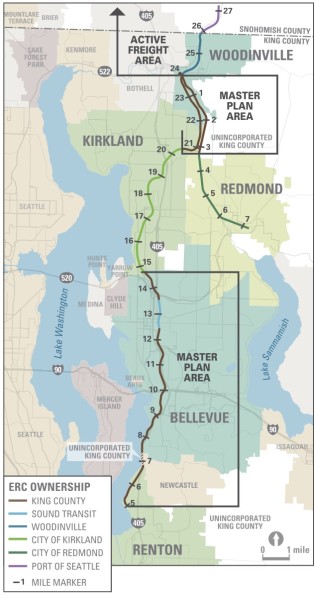 The Eastside Trail is poised to revolutionize non-motorized travel on the Eastside, so why wait? Let’s get an interim trail constructed and usable as soon as possible.

We already reported on King County’s draft Trail Master Plan, which is now out for public input. You can have your say at there are three open houses, listed below, and by submitting comments using this online form by March 31.

Cascade Bicycle Club has created a petition urging the County to build an on-railbed interim trail where applicable in order to get the trail open and operational as soon as possible.

Some sections of the rail corridor — like the Bellevue section planned as part of Sound Transit’s East Link line — will need to have rail and the trail next to each other. But in other sections, transit planning is very early and likely far off in the future if it comes to the corridor at all. In those segments, the County should move ahead with the easiest and cheapest option for opening an interim trail quickly: On the existing railbed like Kirkland’s existing Cross Kirkland Corridor Trail.

You can also voice this opinion at an open house. Details from Cascade Bicycle Club’s Eastside Policy Manager McKayla Dunfey:

The plan represents a great step forward, but King County needs to hear from you to choose the “on-rail bed” trail alternatives where feasible and to move forward with interim trail planning and construction. These choices will mean the trail is built sooner and cheaper than the other options presented. Sign on to show your support here >>

In addition to signing on to show your support  for an “on-rail bed” interim trail, you can also attend an open house to learn about the Eastside Rail Corridor plans and provide your thoughts on what might make the trail even better!

Attend an Open House Near You!

3 Responses to Ahead of Eastside Trail meetings, sign this petition for an interim trail ‘sooner and cheaper’