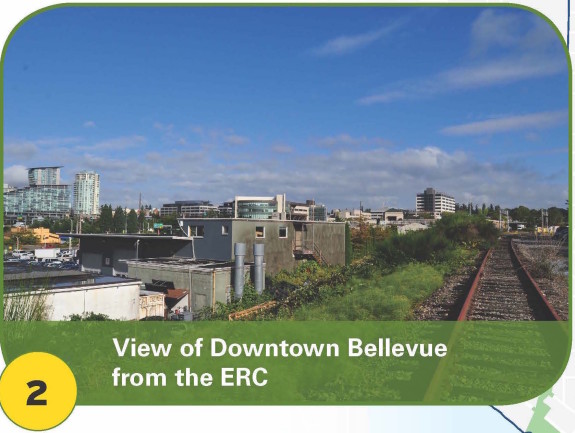 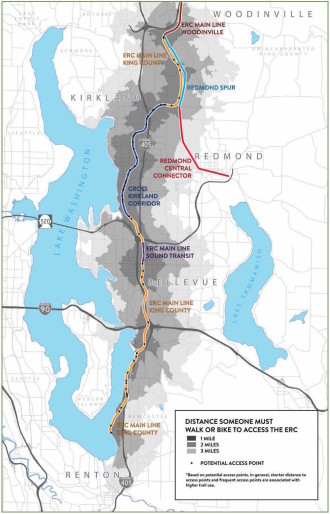 From the Master Plan

It’s very difficult to overstate how huge an impact the Eastside Trail will have on regional bikeability and livability.

Traveling through or very near city centers, neighborhoods and employment centers in Woodinville, Kirkland, Bellevue and Renton the trail itself will revolutioninze non-motorized transportation east of Lake Washington.

Add to that existing and future trail links to Redmond, the Burke-Gilman Trail, the Sammamish River Trail and across the 520 Bridge, and the regional trails will finally resemble and function like a real network (which reminds me, have you seem Zach Shaner’s awesome dream regional trail map designed like a transit map?).

If you are super excited about the possibilities here, then join the celebration 12:30 p.m. Friday near the Kirkland/Bellevue border as the first railroad spike is removed (more details below). After the ceremony, bike the Cross Kirkland Corridor with Cascade Bicycle Club for Happy Hour at the wonderful Chainline Brewing.

As we reported previously, King County will remove the rails from about 1.3 miles of the corridor stretching from the existing Cross Kirkland Corridor southern terminus into the heart of Bellevue.

But even with the rails removed, the trail won’t really be bikeable until a hardpack gravel interim trail surface is completed. King County Executive Dow Constantine said in a November statement that the first section of interim trail could be open “in two years.”

If you want to get even more involved, the county is hosting an Eastside Rail Corridor Summit Saturday in Bellevue. The agenda (PDF) includes panels on transportation and land use, business development along the trail, and breakout conversations to help set near- and mid-term goals.

In 2016, King County will begin the process of removing the old rails from the Eastside Rail Corridor (ERC) to make way for future trail and transit uses. Join leaders from King County, Bellevue, Kirkland, the business community, The Trust for Public Land, and Cascade Bicycle Club on Friday, Jan. 8 as we get an early start and pull up a few railroad spikes ourselves.

Help us take out our first railroad spike!

When: Friday, Jan. 8, 2016
What: Program begins at 12:30 p.m. and is expected to run until approximately 2 p.m.
Where: Intersection of the ERC/Cross Kirkland Corridor at 108th Avenue NE near the South Kirkland Park and Ride (map)

We’ve got a lot to commemorate; getting started on the rails is just one of a few key next steps for 2016. Others include:

Immediately following the ERC commemoration, Cascade Bicycle Club and the City of Kirkland are hosting a guided bicycle ride along the Cross Kirkland Corridor, ending with a networking happy hour at Chainline Brewery, 503 Sixth St S in Kirkland.

These happenings also help kick off the ERC Summit on Saturday, January 9 at Meydenbauer Center.