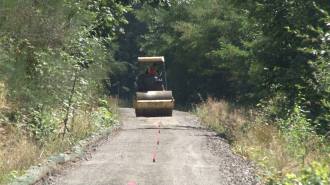 Crews work to pack down the interim gravel Cross Kirkland Corridor Trail to make it ready for biking and walking. Image from Kirkland

The case for freight rail service as a reason to stop to the Cross Kirkland Corridor Trail (one part of the Eastside Rail Corridor) always seemed rather weak. But since it would be decided by a Federal agency and laws governing rail are often old and sometimes strange, a lawsuit by the Ballard Terminal Railroad has been hanging over plans to build a game-changing trail along the Eastside Rail Corridor for a year and a half.

But not anymore. The Surface Transportation Board shot down the challenge, determining that Ballard Terminal Railroad “did not appear to be in a financial position to reinstitute service and there was no real demand to reactivate rail service over the Line,” according to the decision document (PDF) and reported by the Seattle Times.

In other words, let’s get to work building a complete Eastside Trail.

“This ruling is a tremendous victory for the Kirkland community and the Eastside Rail Corridor partners,” Kirkland City Manager Kurt Triplett said in an official statement. “It vindicates the City’s strategy of vigorously defending our rights on the Cross Kirkland Corridor and to have it made available for public use.”

This decision denies Ballard Terminal Railroad Company, L.L.C.’s request for authority to reinstitute rail service on a line of railroad owned by the City of Kirkland, Wash., Central Puget Sound Regional Transit Authority, and King County, Wash. that is currently subject to interim trail use/rail banking under the National Trails System Act, 16 U.S.C. § 1247(d). The Board also denies Ballard’s related petition to partially vacate the notice of interim trail use that had been issued for the line.

A trail along the Eastside Rail Corridor (which does not yet have a full name, so we will just refer to it as the “Eastside Trail”) could connect from the Sammamish River Trail in Woodinville (and, therefore, the Burke-Gilman) to the south end of Lake Washington in Renton. Simply put, it will change everything for the Eastside the same way the Burke-Gilman has revolutionized biking in Seattle and communities along the north end of Lake Washington. 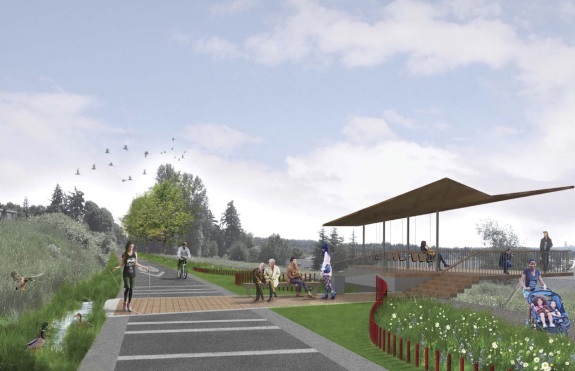 Though King County and especially Kirkland have gotten a jump on trail work and planning, Snohomish County is also looking at options for a trail along its section of the corridor, which could someday connect the trail to the City of Snohomish and the Centennial Trail.

People who live and work in Kirkland should get their first glimpses into the power of this trail this month when contractors complete work on an interim hardpack trail. Here’s a recent construction update:

Crushed gravel has been put down the full length of the trail (from 108th Avenue NE to 132nd Avenue NE), concrete sidewalks have been installed at most of the intersections with pedestrian ramps currently underway.  Rapid flashing beacons at crosswalks, street lighting, and associated electrical work is being completed. New wood decking and railings are currently being installed at the NE 68th Street Bridge and are expected to be complete next week. Pedestrian crossing islands are underway at three crossings including 6th Street, NE 112th Street and 120th Avenue NE. The installation of fencing for safety and sensitive area protection is progressing rapidly throughout the corridor and expected to be complete in early January. The City is pushing the contractor hard to complete the work so the trail can open in early January 2015.