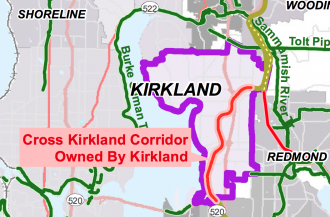 The Ballard Terminal Railroad has filed a Federal lawsuit to stop the City of Kirkland from tearing out unused rail tracks on a segment of the Eastside Rail Corridor through the city. Kirkland recently purchased the segment with the intent of installing an interim soft trail until a permanent trail and possibly even passenger rail service can be designed and funded.

If the name “Ballard Terminal Railroad” rings a bell, that because they are also among the appellants fighting—you guessed it—the Burke-Gilman Missing Link completion in Ballard. That court case has seen more than a decade of lawsuits and delays that continue to this day. Meanwhile, people continue to crash—breaking bones or worse—on the unsafe industrial streets that stand between the trail’s popular segments.

We have held out hope in the past that the Ballard Terminal Railroad Company is not so bad. After all, in 2011 they pitched in to fix a slippery rubber mat that was causing crashes on the Burke-Gilman Trail. But the latest lawsuit is definitely discouraging.

So why would the Ballard Terminal Railroad be suing to stop a trail project in Kirkland?

They want to restart freight rail service. Not passenger or commuter service like many hope will someday serve the corridor, but freight service. I’m sure that’s hardly what the residents of Kirkland and businesses—notably Google—investing near the corridor had in mind when the city purchased the property.

City Manager Kurt Triplett, who has been a staunch supporter of the trail plans, voiced his disappointment in a letter to the community:

It is with great disappointment that I share with you that the City of Kirkland was served on April 1, 2013 with a Federal lawsuit which seeks to stop the City from removing the rail tracks and ties along the Cross Kirkland Corridor.   The lawsuit was filed by Ballard Terminal Railroad Company (“Ballard”) in Federal District Court in the Western District of Washington.  In addition to the injunction, Ballard has filed a petition with the federal Surface Transportation Board (“STB”) seeking to reactivate the Eastside Rail Corridor for freight service from Woodinville to Bellevue, WA.   These actions make it necessary for the City to carefully evaluate Ballard’s claims and to consider our legal options.

As you may be aware, the City has hired a contractor to remove the rails to make way for an Interim Trail along the Cross Kirkland Corridor.  The removal has been anticipated to begin this month; with construction of the Interim Trail to begin this fall. We intend to keep with the community’s desire to allow use of the trail as soon as possible, even if it requires us to put our plans on hold as we take time to better understand the impacts of the lawsuit and petition.

The Cross Kirkland Corridor is 5.75 miles of the 44+ mile Eastside Rail Corridor (ERC).  Apart from the segments owned by the City of Kirkland and the City of Redmond, the ERC has been recently acquired by King County.

It is our initial understanding that Ballard seeks to keep Kirkland from removing the rails on our Corridor so that freight use can be re-established.  We are hopeful that the Federal District Court will rule on the injunction case in the coming weeks and that the STB decision regarding Ballard’s request to reactivate our Corridor as a freight (not transit or excursion train) corridor will also be expedited.

We are confident that Kirkland will ultimately be able to carry out our citizens’ vision for the Corridor.  However, there are many complexities to this issue and your understanding and patience is appreciated.  Updates will be released through the City’s email notification subscriber lists and posted to the Cross Kirkland Corridor webpage at www.kirklandwa.gov/crosskirklandcorridor.

If you have a specific question, please send it to Pam Bissonnette, Director, Public Works Department, at 425-587-3802 or [email protected].