The USA Today published a list of the best urban trails in the nation last week. Near the top of their list is, of course, Seattle’s Burke-Gilman Trail. The paper describes it like this:

This former rail trail is a bike-obsessed city’s pride—and as far as urban bike paths go, arguably the nation’s. Its paved 27 miles begin on Puget Sound in North Seattle and trace the shoreline along the canal and up Lake Washington all the way to the town of Bothell. (A 1.5-mile gap in the Ballard neighborhood is the “missing link.”) One of the most heavily ridden multi-use paths in the country, it’s often called the “backbone” of Seattle’s cycling infrastructure, and its flat terrain, beautiful views, and plentiful access points invite casual cyclists and alley cat messengers alike.

Indeed, it’s rather hard to imagine Seattle without the Burke-Gilman. It’s not just a way that people get around, it’s a core part of the city’s identity. Which is why the following photo from a 1971 protest against the Burke-Gilman Trail is so amazing: 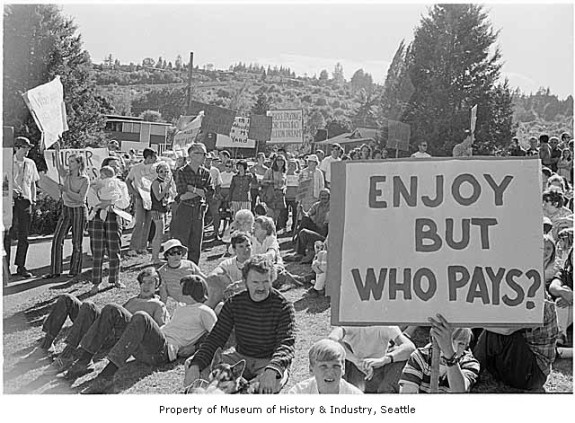 Photo from MOHAI: Rally Against the Burke Gilman Trail, Seattle, 1971 Signs in image: Do the Hungry and Needy Really Want […] Million Trail. […] Woods […] in My Yard. Not More Taxes. Who’s Paying for This $10 Million Dream? We Don’t Want It. Burke Gilman Trail. Enjoy But Who Pays? Who Pays for Upkeep. Photographer: Tom Barlet Image Date: 1971 Image Number:1986.5.55062.1 – See more at: http://www.mohai.org/explore/blog/item/2067-rally-against-the-burke-gilman-trail-seattle-1971#sthash.3mRtlXsn.dpuf

The photo above depicts a public, protest-filled debate over the Burke-Gilman Trail from September 12, 1971. While the Burke-Gilman Trail Park Committee and hundreds of supporters — including Seattle Mayor Wes Uhlman and King County Executive John D. Spellman — walked 11 miles of then railroad track calling for a trail, they held signs reading “A City for Persons to Grow,” “From Rails to Trails” and “Hike and Bike.”

Meanwhile, a group calling themselves the Citizens for Property Rights Committee held signs reading “Hike in the Woods, Not in My Yard,” “We Don’t Want the Trail,” and “Welcome Hell’s Angels” (though the Seattle Times reported September 13, 1971 that the sign’s author spelled it “Angles”).

One Lake Forest Park resident was against the trail because he wanted to buy the section of rail line near his house and turn it into a parking space for his car. He was also concerned about motorcyclists using the trail at night. By November of that year, fears had seemingly grown to include concerns that people would lose access to their homes and that people biking and hiking on the trail wold disturb the wildlife.

A survey conducted later that year would find that only 14 – 19 percent of residents living near the proposed trail opposed it.

By 1973, opposition to the trail had split into two groups: The Citizens for Responsible Planning (seemingly an outgrowth or splinter of the 1971 group) and a group that wanted to run a private steam train along the route (sounds familiar).

The CRP was spending a lot of money pursuing “every avenue available to block development” of the trial, according to an April 22, 1973 issue of the Seattle Times diving into “The Burke-Gilman Controversy.” This included an exhaustive look at land deeds and titles to try to find a donated section of land under the rails they could claim as well as citing parks rules that supposedly prohibited parks near homes. They even went as far as trying to bring in the state’s Shoreline Management Act to try to get the Olympia Legislature involved.

“It is commonly known that animal and birdlife can get along with trains or machines where it is completely incompatible with an invasion of humans which a hike-path will bring,” the group’s chairman W. H. Purdy said in the story.

Purdy also cited King County’s trail plan, which said a trail “should perform a transportation function that should serve schools, shopping areas … as well as provide access to places of work.” And, according to Purdy, “A bike-hike trail in this area does none of this.” He went on to call it “a trail to nowhere.”

It’s hard to be this wrong.

The train group wanted to “share” the trail with people biking and hiking, and called trail supporters “self centered monopolists.”

As discussions about the future of the Eastside Rail Corridor and legal challenges to completing the Burke-Gilman Missing Link continue, perhaps a good reflection on the importance of the Burke-Gilman Trail is in order. Will the Eastside community seize the moment and create something truly wonderful that ties neighborhoods together with a safe and healthy biking and walking trail? Will Missing Link opponents embrace the safe, loved and inspiring trail passing near their workplaces?

Which side of history do you want to be on?