$10M committed to rehab historic trestle. Can the Eastside Trail open by 2020? 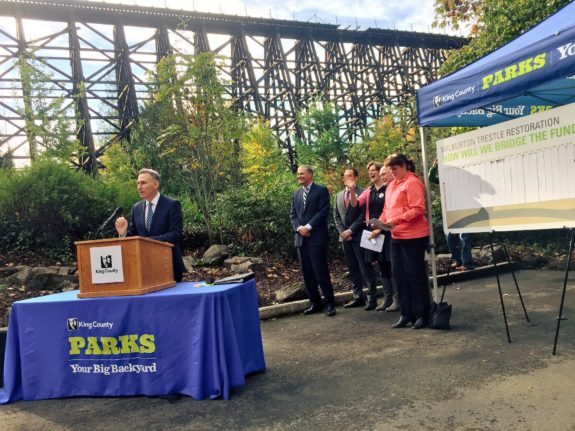 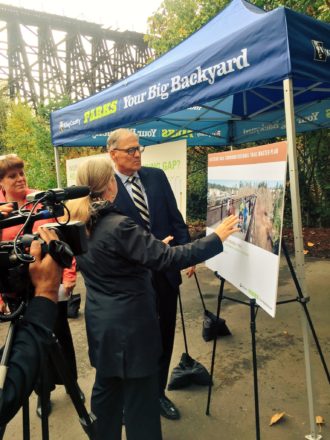 Governor Inslee checks out a concept for a completed trail on the trestle.

King County Executive Dow Constantine and Governor Jay Inslee shared the podium Tuesday to announce $10 million dollars in funding commitments from local, regional, state and private partners to rehab the most difficult and stunning parts of the planned Eastside Trail: The Wilburton Trestle.

The historic trestle towers above local streets and I-405 with sweeping views of the Eastside, including downtown Bellevue. Its value extends even beyond the major walking and biking improvement it promises. Once saved, rehabbed and connected to a complete Eastside Trail from Renton to Woodinville, the trestle will likely become an iconic place in the City of Bellevue.

I mean, check out this drone footage and imagine that this is your bike ride home: 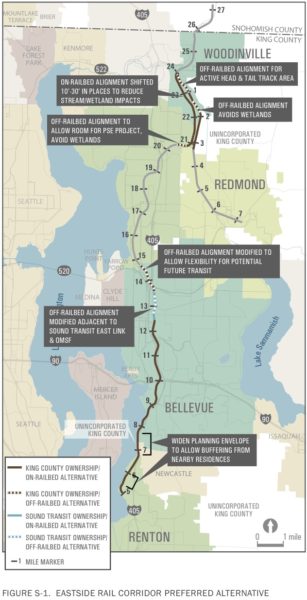 King County Councilmember Claudia Balducci also spoke about her work to make the trail a reality along with local partners in the City of Bellevue and private partners like Group Health, which operated many health care centers connected by this route.

Constantine also announced that a finalized Eastside Rail Corridor Master Plan is headed to the King County Council. The plan makes the sensible choice to align the trail on the existing railbed. Trail supporters encouraged this option because it would cost much less and could be built more quickly.

If the county can secure the $10 million committed for Wilburton Trestle and close the remaining $3.2 million gap, that project could be complete in 2020. So that sets an ambitious goal: Can the County and its partners fund and complete at least an interim trail by the time the trestle (and Sound Transit construction) is complete?

UPDATE: This effort and timeline would also require WSDOT to build a new I-405 crossing early in their planned work on that freeway. But that crossing could be completed in time for the opening of the rehabbed trestle. There are a lot of moving pieces in this plan, but they could all line up perfectly.

The county has already started construction on an interim trail in the north end of Bellevue, connecting to the already open Cross-Kirkland Corridor Trail. This northern segment is due to open next year before WSDOT connects the new 520 Trail to Seattle’s Montlake neighborhood.

For a few years, a section of the trail will be a construction site for Sound Transit’s East Link light rail and Wilburton Station. An interim trail connection through this Sound Transit-owned section could be open as early as 2021, finally connecting the trail into downtown Bellevue. There will need to be a detour around the construction area for a few years.

So if the Wilburton Trestle, I-405 crossing and interim trail improvements are all complete by the time Sound Transit’s trail segment opens, the trail could be almost fully usable in 2021.

I know that sounds like a long time from now, but it’s moving at light speed for an urban trail of this length. We’re talking about 16 miles of railroad-grade trail from Renton to Woodinville. There is no biking or walking connection like this on the Eastside. It will change everything.

More details on the announcement from King County:

King County has assembled significant funds needed to transform the historic Wilburton Trestle in Bellevue into a stunning elevated trail that can be enjoyed by commuters, cyclists, runners and pedestrians.

The century-old trestle – the largest of its kind in the Pacific Northwest – is expected to be one of the most popular segments of the emerging Eastside Rail Corridor, a 16-mile uninterrupted trail that will stretch from Renton to Woodinville, through Bellevue with a spur to Redmond.

“The iconic Wilburton Trestle will be the symbol of the world-class regional trail system we’re creating along the Eastside Rail Corridor,” said King County Executive Dow Constantine. “We’re repurposing the historic trestle into a premier public asset that will provide commuters, cyclists, runners and pedestrians with a spectacular view of the Eastside skyline.”

Built in 1904 by Northern Pacific Railway, Wilburton Trestle is one of the few remaining structures that were typical of the original transcontinental rail system. It’s nearly 1,000 feet long and rises more than 100 feet above the ground.

The improvement project – anticipated to be completed in 2020 – will convert the trestle into a multipurpose elevated trail.

“The innovative and iconic Wilburton Trestle project will connect the Eastside like never before, through a multi-use trail corridor,” said Gov. Jay Inslee. “I am pleased to announce the state’s intent to provide capital funding for the project, and I can’t wait to come back and be one of the first to cross the trestle when it opens.”

Executive Constantine also announced that he is creating a commission of local leaders to create a funding strategy to complete the entire Eastside Rail Corridor project.

The project is part of the broader Eastside Rail Corridor Master Plan, which is now before the Metropolitan King County Council. The trail will connect growing communities in East and South King County and will provide additional commuting and recreational options.

Earlier this year, Executive Constantine led a celebration farther north on the corridor, pulling the ceremonial first spike from an obsolete railway to make way for a multipurpose trail.

8 Responses to $10M committed to rehab historic trestle. Can the Eastside Trail open by 2020?