Who is going to step up and fix the planned waterfront surface highway? 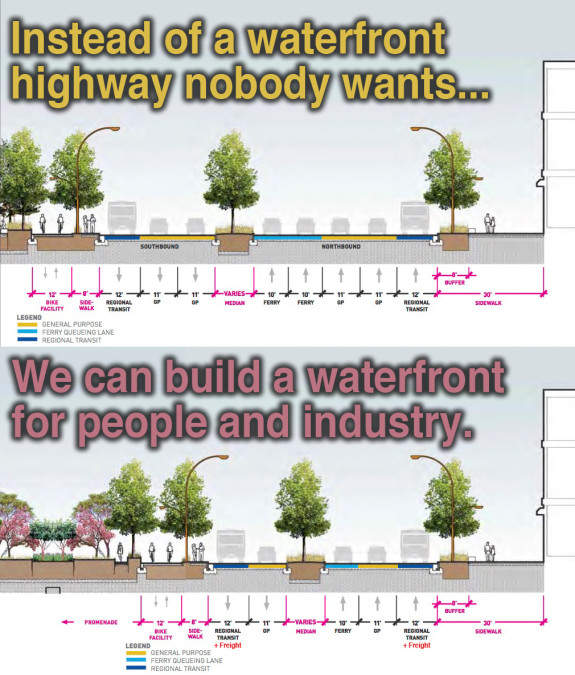 So many of you submitted comments shocked by the gigantic waterfront highway presented in the most recent Waterfront Seattle plans that you triggered a requirement mandating the city study a road design that has fewer lanes to cross between the downtown core and the rebuilt waterfront.

The proposed eight-lane road is so wide that people who move slower — like children, many elderly people or people with mobility issues — won’t be able to cross the whole street in one signal. They will have to cross to the center median and wait a couple minutes before continuing across to finally reach the other side. Or they’ll just get stuck in the middle of traffic when the light turns green, a terrifying and dangerous situation.

Obviously, this is not acceptable. So good job submitting your comments! You all were very clear about the problem, and you demanded a solution from our city and state. And they heard you, so now they are studying an option that removes the … transit lanes?!?

That’s right. Even though essentially nobody asked to get rid of the transit lanes, that’s the study we’re getting. Because everything about this process is backwards.

In a short bullet point during a mostly-fireworks-free Transportation Committee meeting last week, a planner for the Waterfront Seattle project mentioned that they were adding a study to analyze the impact of removing the promised transit-only lanes on the planned Alaskan Way surface street. These transit lanes are vital for moving all the buses that currently use the viaduct, including most service to West Seattle.

But the comment did not go unnoticed. Transit boosters, including Zach Shaner at Seattle Transit Blog, heard the new bit of news and asked, and I’m roughly paraphrasing here, “What the fuck?”

Well, it turns out the problem stems from an agreement between the Port of Seattle and the State. Zach at STB explains:

[Office of the Waterfront Director Marshall] Foster said the total number of comments asking for a narrower roadway hit “a tipping point” that forced the City to formally respond to their request, necessitating a SDEIS that studied a narrower roadway. However, Foster said the funding agreement between the State and the Port explicitly codifies two general purpose lanes in each direction, effectively prohibiting the City from studying reducing those lanes in the SDEIS:

So the City is in the odd position of being required to study a narrower channelization because enough of the community asked for it, but since the only mode not explicitly protected in its right-of-way allocation is transit, the City will study eliminating transit priority even though neither the City nor advocacy groups see that as a preferred outcome. Isn’t process fun?

No! It’s not. It’s garbage, and we need a leader (or, you know, all of them) to step up and broker a deal that actually makes sense and creates a waterfront the people and businesses of our city, region and state deserve and demand.

Here’s a great place to start, suggested in a letter (PDF) signed by Feet First, Cascade Bicycle Club, Transportation Choices Coalition and WA Bikes: Broker a deal with the Port to allow freight and transit to share a lane through this pinch point.

Clearly, freight carriers (especially those with hazardous loads that can’t go in the new tunnel highway) are concerned about getting stuck in traffic, which is why they demanded the extra lanes in exchange for Port funding. But creating transit/freight lanes could meet that need just as well, and it would help keep people walking safe, keep buses moving smoothly and allow for more public space near the waterfront all at the same time.

That’s great for businesses on the waterfront and foot access to the ferry terminal. So long as analysis shows the relatively low numbers of freight trucks don’t slow buses, there’s really no down side to this idea.

And maybe if more people can access the ferry comfortably by foot, we really won’t even need that extra ferry queue lane. That’s how you get the image at the top of this post.

The city likes to say that safety, especially for our most vulnerable community members, is our top transportation priority. The State’s Target Zero program states similar goals. Well, prove it.

Don’t make people with disabilities get caught in the middle of eight lanes of traffic because they ran out of time. Don’t make parents hold their children’s hands and run to make it to the distant curb before the light turns green. The people have been very clear about what they want from this project, and the current plans don’t cut it. Do we really need to protest even more? Or will our leaders step up and deliver a better waterfront for everyone?

UPDATE: Per request, here’s a list of relevant people you may wish to contact, assembled by Seattle Transit Blog:

And here’s a list of Seattle Port Commissioner emails (I don’t have Fred Felleman’s email yet, but I’m assuming it will be [email protected]):

33 Responses to Who is going to step up and fix the planned waterfront surface highway?