Bike the Vote! Where to drop your ballot (+ NO on the Viaduct Park, YES on housing) 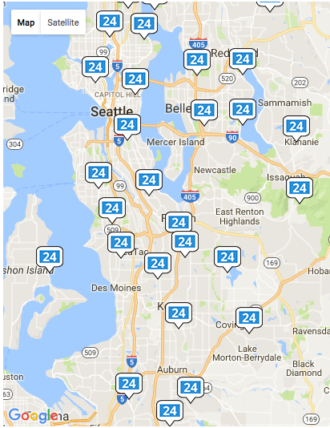 Voter turnout for the August 2 primary is looking very low so far. Don’t miss your chance to help the housing levy scream to victory.

And hey, dropping your ballot at a dropbox is a great excuse for a bike ride on a beautiful day. It’s also good practice for ST3 in November.

We were in no place to make a full run of endorsements in this primary, which is why we didn’t publish a voters guide when ballots hit mailboxes. But if you are looking for last-minute advice, check out the guides from Seattlish and The Stranger.

And though I’m not sure how many people are still on the fence on the two issue votes in Seattle, here are our thoughts:

YES on the housing levy

The housing levy (Prop 1) will not fix Seattle’s housing affordability crisis. But it’s a vital piece of the city’s Housing Affordability and Livability Agenda. The bigger the margin it wins by, the stronger the political pressure to push for more affordable housing changes as the City Council and Mayor’s Office works to enact HALA recommendations.

There are two ways to increase affordable access to safe and convenient biking: Build more bike routes in lower-income, underserved areas and build more affordable housing near quality bike routes we already have. We need both.

NO on the Viaduct Park

While the idea of preserving part of the Alaskan Way Viaduct to create an elevated park on the waterfront (I 123) does sound pretty cool at first, the concept collapses (pun intended) under scrutiny.

The existing viaduct just isn’t structurally sound. Support for this idea dries up pretty quickly when you realize that the plan would actually involve tearing down most of the existing viaduct and building a new one in its place. Preserving remnants of city history (even awful parts of it like the viaduct) can be a good idea when it works. But this isn’t such a case.

And approving this measure would not even fund the project. It would just create and fund a new “public development authority” that would then try to somehow figure out how to get the money to actually build the thing (the City Council does not support the plan, and they should control the city budget).

We are no fans of the state’s existing plans for a surface highway on the waterfront. But the city’s developing waterfront park is pretty cool and has received tons of public feedback over the course of years. These are two different projects (state highway and city park) that people may have linked in their minds. The city park is shaping up to be pretty cool, complete with its own functional overlooks.

If this vote were to shrink the waterfront highway to help the city’s park plans be even better, we would vote the hell out of that. But this is not that vote, sadly.

Kate Martin is a friend of the blog who has been working on this idea for years. It’s hard to give up an idea that could be so cool, but it’s just not going to work. I am glad someone pushed the idea to see if it was feasible. But when you are rebuilding a new viaduct to mimic the old one that can’t be preserved, well, you have your answer. This will make a fine addition to that awesome section of MOHAI showcasing Seattle urban plans that were never realized.

Do you have a candidate you want to plug to last-minute biking voters? Make your case in the comments below.

7 Responses to Bike the Vote! Where to drop your ballot (+ NO on the Viaduct Park, YES on housing)