Our latest look at plans for a new downtown waterfront 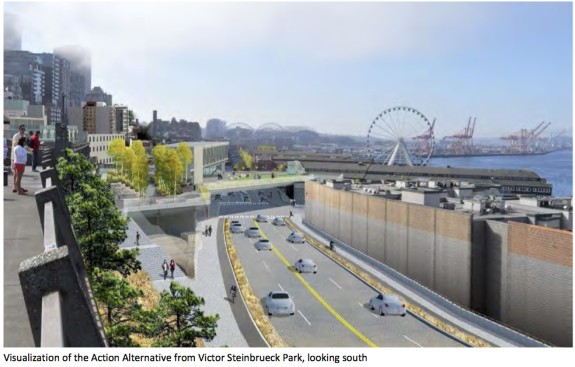 The draft Environmental Impact Statement for the redesigned Seattle downtown waterfront is out. You have until August 12 to submit comments, which you can do via this online survey or by emailing [email protected]. The final EIS should be out in late 2015 or early 2016, and construction should be ready to begin in 2017.

The plan still includes a 12-foot protected bikeway on the west side of the new Alaskan Way, separated from the sidewalk, bus stops and general traffic. It also includes quality protected bike lanes on the new Elliott Way, which will climb the hill from Alaskan Way to connect to Elliott and Western Avenues. Removing the viaduct will allow for all kinds of new connections in this part of Belltown.

The roadway is still very wide with a ton of lanes to cross, especially on the south end between the ferry terminal and King Street. It’s great that most the lanes are 10 or 11 feet, since studies have shown wider lanes encourage speeding and increase collisions.

But people on foot and bikes crossing from Pioneer Square to the ferry or waterfront will still have to traverse up to 88 feet of traffic lanes. Among older populations, for example, a walking speed of 3.3 feet per second is common (PDF). At that speed, it could take nearly half a minute just to walk across all these lanes of traffic. That’s a long time to be exposed in front of traffic, and such width makes it a lot easier to get caught halfway when the lights change. 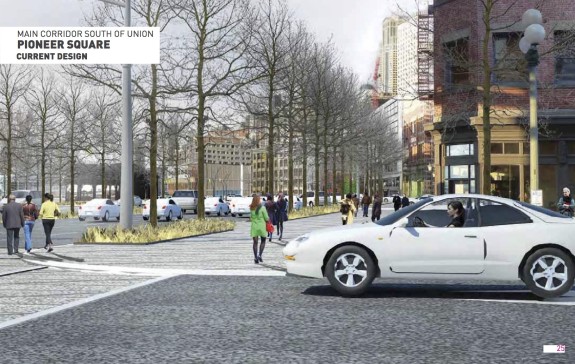 The study includes significant analysis of the motor vehicle level of service, but nearly nothing for pedestrian level of service even though it predicts more people walking across the street than vehicles driven on it during summer days.

Since walkability is clearly secondary to motor vehicle throughput goals in these designs, we referred to this previously as a surface highway to complement the tunnel highway. It might be an acceptable design if the tunnel were not being built (or if we choose to abandon the tunnel), but it’s way overbuilt as an addition to the tunnel.

Here’s an updated look at how the viaduct-free waterfront street design is shaping up: 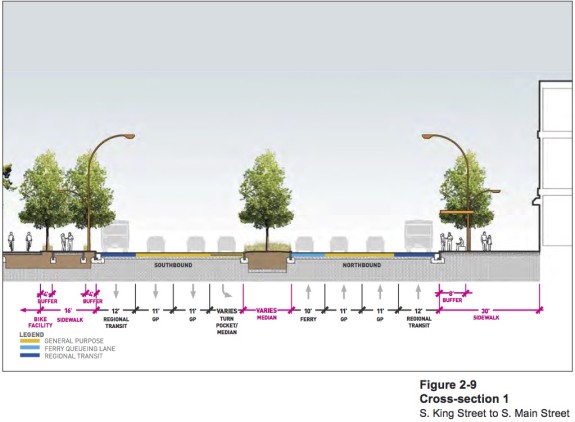 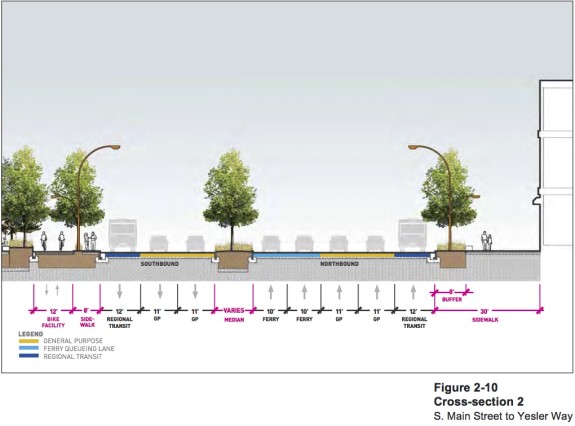 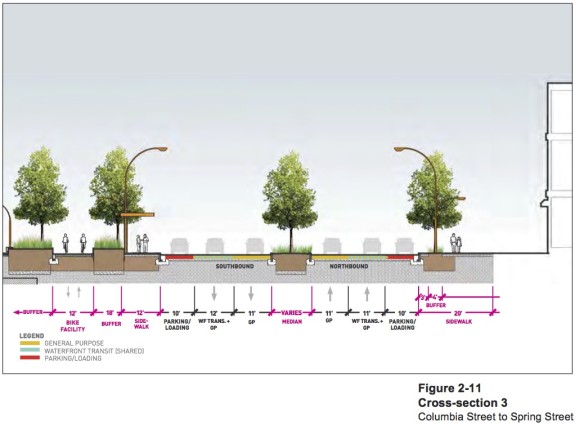 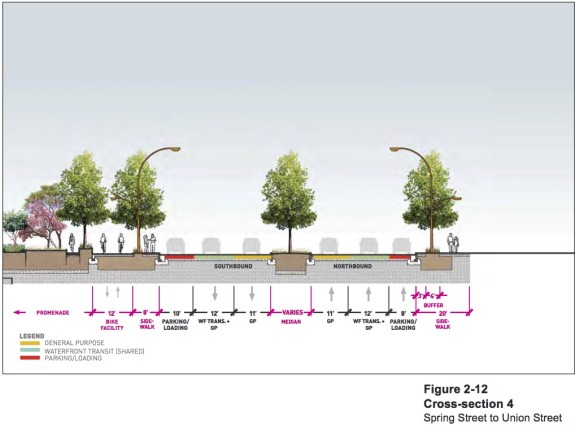 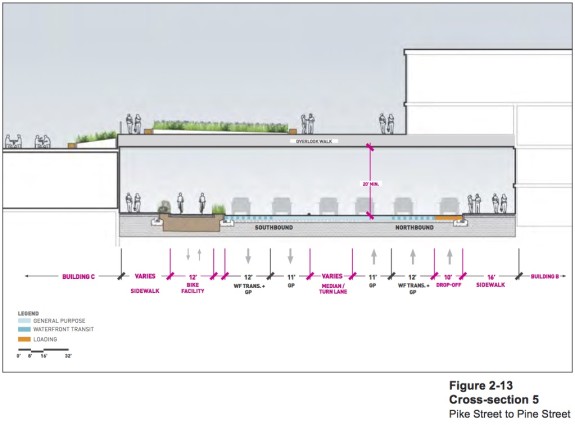 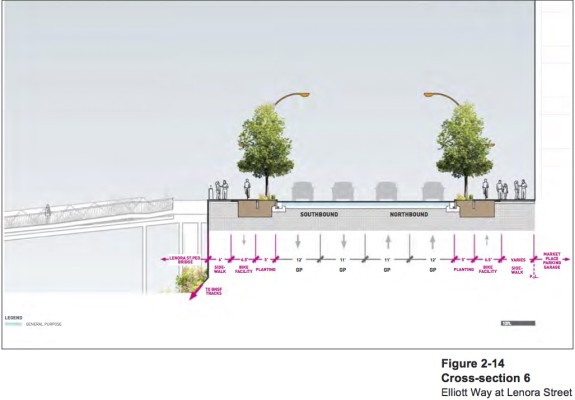 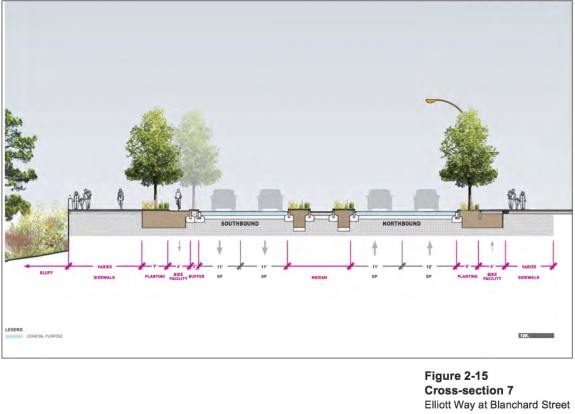 No connection to the Elliott Bay Trail 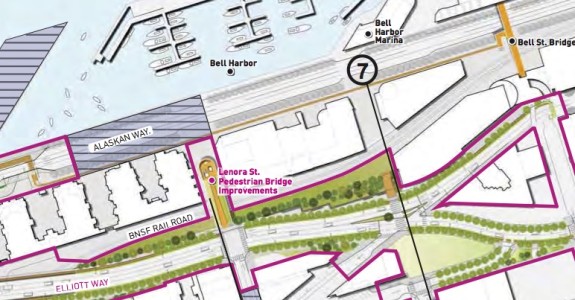 I apologize for not catching this glaring problem in my initial reporting (though it certainly wasn’t made clear in the presentations), but the planned bikeway will not actually connect to the Elliott Bay Trail. Instead, it will cross Alaskan Way at Virginia Street to connect to the existing skinny trail next to the old trolley tracks on the east side. That trail, of course, ends abruptly around Bell Street, a mere six blocks from the start of the Elliott Bay Trail.

It’s simply not acceptable that after all this work and money, we stop six blocks from actually completing the waterfront bikeway. Seattle doesn’t need another 80-percent-complete bike route. I don’t know if this change is something the state can add or if it requires a city/state partnership, but it needs to happen. 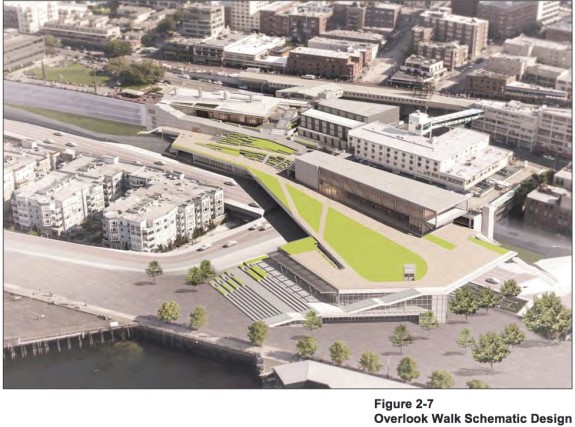 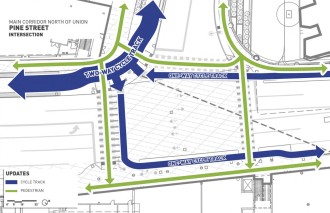 The grandest waterfront addition is the Overlook Walk between Pike Place Market and the rebuilt public space on the waterfront. This will include a ramp, but it’s not specifically being designed as a bike facility. Don’t expect this to be a high-speed bike route. It will probably (hopefully) be super crowded most the time, too.

The protected bike lanes on the new Elliott Way will probably be the preferred bike connection from the waterfront to the market and Belltown.

The existing Bell Street Park will be extended all the way to Elliott Ave, connecting to the elevator down to Alaskan Way. It’s hard to tell from the map included above, but the new Elliott Way protected bike lanes should connect to Bell. This sets up Bell to be an awesome biking and walking connection, especially if the city can make needed changes to cut down on rampant illegal cut-through traffic and allow two-way travel, at least for people on bikes.

It that happens, all you would need is a counterflow bike lane on Bell for three blocks between 5th and 8th Avenues, and you’d have complete and safe bike connections to Dexter, the planned Westlake Bikeway and the Burke-Gilman Trail. How freaking cool would that be? 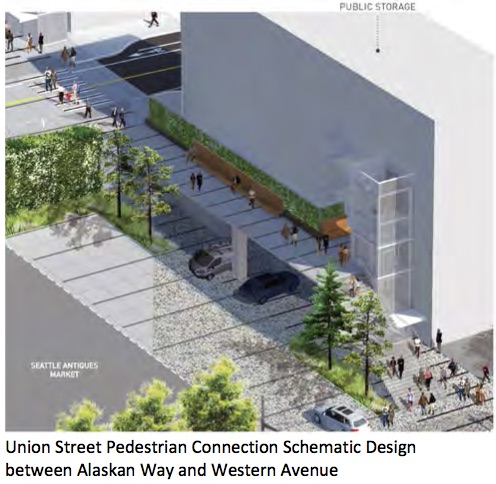 Like the Overlook Walk, the improved Union Street connection will also not really work super well for people on bikes. There will be an elevator, but this is also primarily being designed as a walking connection. You will still be able to take University to Western, which will still have bikes lanes.

Further south, Main and Washington will both be rebuilt, and the out-of-service tracks between Alaskan Way and Occidental will be removed. So these streets may become much better bike connections. It would be great to see them get some extra traffic calming to really solidify them as low-speed, low-traffic spaces. And maybe remove the rest of the rails up to 5th Ave while we’re at it?

You can dive further into the DEIS document or take the online survey here.

For more details on the ongoing design, check out these presentations from late 2014: