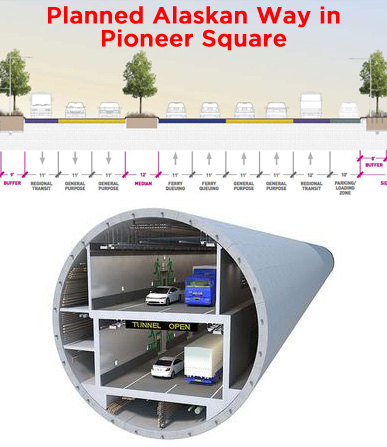 Do we really need all this?

So it turns out that when people across the Seattle region plan ahead and change their transportation habits, we can prove to ourselves that we don’t need SR 99 to go through downtown after all. After months of news stories about how terrible traffic would be once the Viaduct closed for good, traffic during the first couple commutes was not much worse than it was before.

We should be celebrating this accomplishment, because people all across the region had to work together to make this happen. It is empowering to know that we don’t need a new car tunnel or a nine-lane waterfront road, that we can change our habits to reduce our dependence on cars and burning oil. Cars are a major cause of preventable death and serious injury in our region, and transportation is our biggest source of greenhouse gasses. But it’s so easy to feel defeated because reducing driving just seems like an impossible lift.

These demonstrations are important because we have far too little faith in our collective ability to change, and that’s holding us back from addressing the massive challenges ahead of us. This pessimism led state Democrats to invest billions in a too-good-to-be-true car tunnel solution to the Alaskan Way Viaduct rather than investing in non-driving methods to move people and goods through the region. The same pessimism led Seattle voters to back that tunnel (well, the lack of a cohesive vision for an alternative didn’t help). A lot of people who care about addressing climate change still supported the tunnel because they just couldn’t imagine that our region could survive without two north-south freeways through downtown.

Worse, leaders were so pessimistic about our ability to change that they allowed the Viaduct to remain in heavy use for 18 years knowing full well that it would collapse in an earthquake. We got lucky, but that was not a gamble worth taking.

So it’s not just important that traffic wasn’t so bad Monday and Tuesday, it’s important that the people of our region take time to recognize and celebrate what this accomplishment represents.

And this is not the first time we’ve done this. In fact, Seattle has proven this point several times before during extended Viaduct closures. The problem is that as time goes on, people tend to slip back into old driving habits, especially if the method they chose to replace their car trip proved not all that great. So if the past repeats itself, you should expect traffic to creep up over the next week or so.

But it didn’t need to be this way. Imagine how different things would be if we had fully invested in transit and a connected bike network rather than digging a massive car tunnel. Today, as people look for ways to avoid driving their typical SR 99 routes, they could have had light rail to West Seattle and Ballard, more express bus routes to more neighborhoods across the region and bike lanes to and through downtown that are separated from car traffic most or all the way. Basically, people across the region could have had so many more tools to work with when piecing together a new way to get around.

Instead, we chose the car tunnel. And we’re about to make another point cities across the world have proven many times before: Traffic will still suck once the tunnel opens. Because you can’t just bury car dependency in the ground. You need to rise above it with modes that actually fit in densely-packed areas: Transit, biking and walking. You also need to build affordable housing oriented around transit access rather than highways so lower-income folks aren’t simply pushed into the places with the worst traffic to bear the burden of dysfunctional car-oriented planning.

We don’t have a time machine to go back and change the tunnel decision. But we can learn from it and from this week’s demonstration that people can change their driving habits. The next generation of leadership in our city and state need to have faith in the people they represent and should ditch the pessimism of previous leaders. There are a lot of great land use and housing bills hitting desks in Olympia right now, and they could be a very good start. Seattle’s City Council is debating big city rezone plans right now, and they have a chance to believe in the people and push for the boldest options to create the most housing that is affordable for everyone. This is no time to water things down to appease people afraid of change. We know we can change when we need to.

Last year, Mayor Jenny Durkan and SDOT snoozed on a lot of opportunities to make sure bus and bike lanes were all connected and in place before the SR 99 shutdown began. But they can still take action this year to catch up. People this week have shown their eagerness for biking, walking and transit options to get around. Now it is on the mayor to deliver. She can’t go back and change major past decisions to invest in the tunnel or build light rail to West Seattle and Ballard more quickly, but she can paint key sections of the Basic Bike Network to help folks get from SE Seattle to downtown or from the Elliott Bay Trail to Pier 66 or from the Westlake Bikeway to 2nd Ave, to name a couple examples. And she can paint more bus lanes to make sure transit can get around major traffic pinch points.

The need for these improvements won’t go away when the tunnel opens. The shift away from driving is a longterm need for our region and the world. The supposed downsides to building better biking, walking and transit infrastructure is all in our heads. If we don’t need the Alaskan Way Viaduct flying cars over downtown, surely we can also get by without a lane here and some parking spots there.

This entry was posted in news and tagged jenny durkan, sr 99, surviverealign99. Bookmark the permalink.