It is 2016. Nearly every month this year reached the hottest global average on record. Cities across the world and across our nation are working to remove downtown highways that divide and depress their vital economic and cultural centers.

Yet Seattle of all places is still preparing to build a new surface highway between the glorious Elliott Bay waterfront and its downtown core despite warnings from major transportation advocacy groups warning that such a wide roadway would put people walking in danger and would make the city’s waterfront less desirable and accessible for yet another generation. On top of that, the groups pointed out that the wide planned road would induce more motor vehicle trips and increase the release of greenhouse gasses, directly in conflict with the city’s stated greenhouse gas emission goals.

Waterfront Seattle, lead by Seattle along with regional and state partners, released its final environmental impact study Monday, and it shows that planners chose to completely ignore the advice of these groups. Their vision for Seattle’s waterfront “boulevard” remains the same as before: Up to 37 yards of motor vehicle traffic separating our historic downtown from the waterfront: 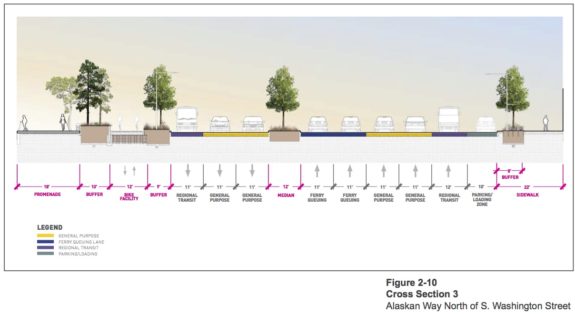 It would take as long as 30 seconds for a fit and able-bodied person to walk from curb-to-curb between Pioneer Square and the new waterfront promenade. For our slower-moving neighbors — including many kids, seniors and people with mobility challenges — the walk may take so long that they will only be able to make it to a mid-street island before the light changes. They will then need to wait in the middle of this highway for a second round of traffic to go by before continuing their journey to the waterfront.

This is a slap in the face to these neighbors. It is an institutionalized insult that tells people walking on the waterfront (or to the ferry terminal) that they are not important or valued, especially if they are not physically able to race fast enough to beat the signal countdown.

This plan is wildly counter to the vision most people want from their revamped waterfront, I’m pretty sure. The multi-billion-dollar tunnel highway was supposed to allow us to reclaim our waterfront. Instead, we’re also getting a highway on top of our tunnel highway. If this surface highway plan is constructed, our future waterfront will be less accessible from most of downtown than it is today with the loud, shaky and unsightly Viaduct.

We cannot let this happen. The environmental review and design process has gone horribly wrong, blinded by a windshield perspective that has led planners to miss the big picture: The Viaduct removal project is about reclaiming our waterfront. It is not about filling our waterfront with cars.

The easiest way to fix the plan should have been the design process itself. But stern-yet-polite comments from respected transportation advocacy groups like Feet First, Transportation Choices Coalition and Cascade Bicycle Club were not heeded (see their letter and Waterfront Seattle’s dismissive response). All these reasonable suggestions were rejected due to concerns the “level of service” for motor vehicles would be worse than Waterfront Seattle’s preferred plan.

But Waterfront Seattle is not equally concerned about the “level of service” for people walking. If they were, the proposed street would look very different. And that’s the problem at the heart of this project: The core framework put cars first, then asked the people what they wanted to do with whatever was leftover. They never truly questioned whether 37 yards of traffic is too many.

Likewise, the environmental study ironically includes page upon page of traffic projection analysis but only one page out of 328 mentions climate change (you know, the environment). That page notes:

Translated from planner speak, this means that they know how to measure traffic, but they don’t know how to measure greenhouse gas emissions caused by their projects. So they chose to ignore the need to reduce emissions rather than concern themselves with understanding the impact more car trips (and fewer walking trips) would have on greenhouse gas emissions.

But while the planners aren’t concerned about climate change, the people of Seattle and the Puget Sound Region sure as hell are.

So now our city, state and regional leaders really only have one option: Reject this highway plan and demand a better waterfront boulevard that respects every resident of our city, including those walking and those with mobility challenges. And demand a project that takes climate change and the city’s stated goals of reducing the share of downtown trips taken by motor vehicles seriously.

The good news is that other than the surface highway itself, most of the plans are great. The overlook walk to the market is very exciting, as are many of the ideas for the new public space on the waterfront. So we don’t need to go all the way back to square one. We just need to redo the highway section.

A sea of traffic in Pioneer Square, a new Mercer Street for the rest 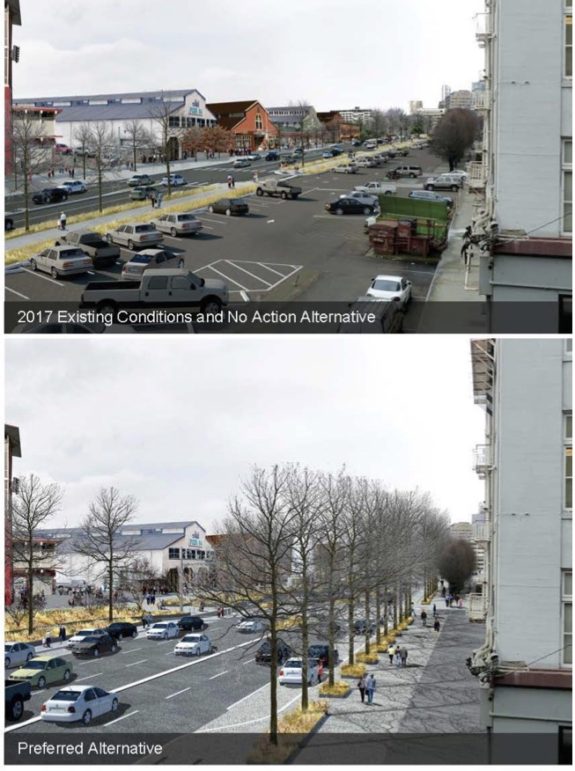 The top image looks north from Marion as it would be today if the Viaduct were removed. The bottom image is what it would look like with the planned highway. As bad as the top image is, the bottom only makes things worse. We can do better.

While the extremely wide 111-foot street splitting through Pioneer Square is certainly the worse part of the plan, the rest of the street is much too wide, as well. You don’t need to wait and see what this will be like, you can just go down to Mercer Street in South Lake Union today. That’s almost exactly what the city and state are proposing to build on the waterfront. It’s an uncomfortable and far-too-wide street where nobody wants to spend time and that people avoid walking across if they have a choice.

Is this really the vision for our waterfront? 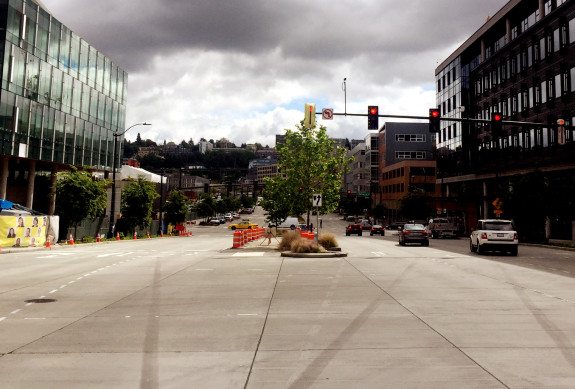 North of Yesler or so, the city and state’s waterfront plans would be much like Mercer Street.

Mercer is perhaps the best cautionary tale for this waterfront project. Once slated for a viaduct-style elevated highway separating the city center from Lake Union (a plan narrowly defeated), the Mercer corridor has been attempting to act like a highway for the past generation. Walking, biking and transit was an afterthought at best and actively discouraged at worse (remember how skinny the Broad and Mercer Street sidewalks were under Aurora?).

They city recently spent $237 million to remake the corridor, but they compromised in favor of moving car traffic at nearly every opportunity. The road is too wide, lanes are too wide, corners are shaved back to allow high-speed turns, and signal cycles are too long requiring long waits for the walk signal. The result is a road that works for nobody. Traffic is miserable, walking across it or along it is miserable, and it doesn’t support nearby businesses. Everyone loses.

If the Waterfront Seattle plan goes forward, the same exact thing will happen on the waterfront. But it doesn’t need to be this way.

The waterfront remake is not about cars, it’s about people 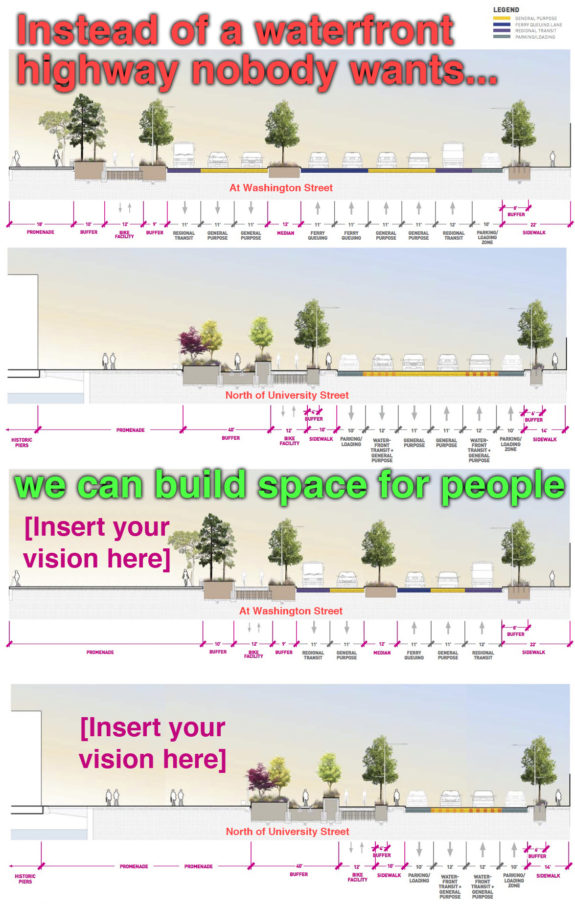 Here are the stated “guiding principles” for the Waterfront Seattle project:

Yet the current design of the waterfront highway is directly counter to nearly all of these goals. Therefore, the result is a failure and should be rejected.

Perhaps what planners are missing is that this should be a transformational project. Instead, they are trying to accommodate their projected number of cars based on current use. But those cars are there today with a viaduct that provides people with a huge incentive to drive. We have the power to make different decisions with our new waterfront. We can build to support the uses we want.

That means providing access for motor vehicles, but not prioritizing them. Instead, make walking, biking and transit the undisputed easiest and best ways to get to the waterfront and the ferry terminal.

We are a big city with an increasingly dense center. Driving will never be easy here, and reasonable people don’t expect it to be. It’s not easy today, and it won’t be easy in 2030 or 2045 either. The harder we try to make driving easy downtown, the more harm we will do to the walking environment. And the traffic will still be there regardless.

By prioritizing this extremely valuable public space for people, we will open the waterfront up to a generation of new ideas. A wider public promenade will be able to do more than we can even imagine right now. We cannot know what a local entrepreneur, event planner or community leader will think to do in that space throughout the next generation. But it could be the next iconic, creative idea that makes Seattle Seattle. That’s the waterfront vision I believe in.

So the question is: Will any of our public leaders stand up against this surface highway? We tried the nice route, offering design suggestions and comments, but that didn’t work. Is it time to protest?

Founder and Editor of Seattle Bike Blog.
View all posts by Tom Fucoloro →
This entry was posted in news and tagged alaskan way viaduct, waterfront, waterfront seattle. Bookmark the permalink.