The UW Burke-Gilman Detour Strikes Back! Section will close Monday until summer 2016 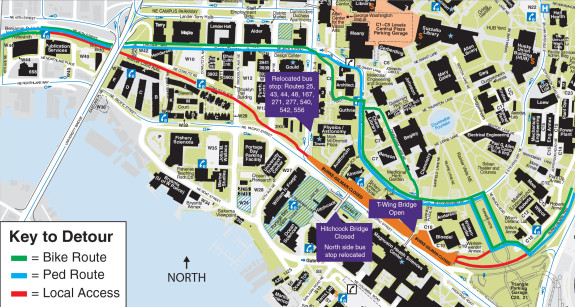 UPDATED 10/12 with new map from UW showing which bridges are open.

I know you just started enjoying a fully open Burke-Gilman Trail, but it goes back under the knife Monday.

The upcoming detour route is similar to the route in place last year, except a little shorter and with fewer twists and turns. Some sections of trail will remain open for local access, but won’t work for through-travel. The city also installed new bike lanes on Campus Parkway and Brooklyn that could help better connect the detour route to the University Bridge.

The trail remake will include lighting, better sightlines, improved trail intersections and separate spaces for people walking and biking. When complete, the trail will be twice as wide as it is today, which is important for carrying the extra people expected to walk and bike to and from the UW light rail station. That station is scheduled to open in early 2016.

This work comes shortly after the UW received $16 million from the state’s transportation package to remake the trail through their campus. So that means this closure will be far from the last big detour you can expect in the coming years.

And as we reported recently, Seattle’s Parks District also plans its own Burke-Gilman Trail repaving in 2016.

You can learn more about the project and keep up-to-date with detour changes on the UW project website. Details from UW:

Next week, the University of Washington will begin a project that will completely remake a portion of the Burke-Gilman Trail through the campus, providing significant safety and capacity improvements to the region’s premier bicycle and pedestrian corridor. Beginning Monday, Oct. 12, this construction will require a significant detour for people using the trail through the campus. The detour will follow a similar path to the detour that was in place last year and earlier this year, but with some changes. The closure is expected to last about nine months, ending in summer 2016.

For much of this project, the trail will be closed between 15th Avenue NE and Rainer Vista. The detour for through traffic will run from 7th Avenue NE to just east of Rainier Vista. Local traffic will be able to use the trail between 7th and 15th avenues, as well as through the Rainier Vista area from the east, allowing for access to UW Medical Center and the Magnuson Health Sciences Center.

The detour route is designed to be as safe, direct and convenient as possible, running through protected bike lanes and low-traffic shared roads, with traffic control measures planned to improve bicycle safety on Stevens Way.

The detours for people on bicycles and people walking will differ slightly. The routes will be indicated by the same signs used for the previous detour: green for the bicycle detour and blue for the pedestrian detour. Green-backed sharrows on campus roadways will also indicate the bicycle detour route.

The construction will have some other effects, too. The Hitchcock pedestrian and bicycle bridge over NE Pacific Street will close as early as Wednesday, Oct. 14, and remain closed for the duration of the project. The T-wing overpass across Pacific will remain open for the duration of the project. The bus stop near the bridge on the north side of Pacific will move around the corner to the east side of 15th Avenue. Parking lot C10 and some campus roadways may periodically be affected by construction equipment and traffic.

The trail detour and other changes may pose a temporary inconvenience, but significant reward will come at the end of the project: a brand-new section of the Burke-Gilman Trail, enlarged to double its previous width and including separate pathways for pedestrian and bicycle traffic. It will also feature new lights, more blue emergency phones, clarified intersections and improved sightlines. While these improvements will make for a better trail experience overall, they are especially necessary with the opening of the nearby UW light rail station coming next year. The project also includes the construction of a new secure bike parking facility near the T-wing overpass, with space for more than 100 bicycles.

Thank you for your patience and support while we undergo this project to provide a better Burke-Gilman Trail for the University and for Seattle.

This entry was posted in news and tagged burke-gilman trail, uw. Bookmark the permalink.

34 Responses to The UW Burke-Gilman Detour Strikes Back! Section will close Monday until summer 2016