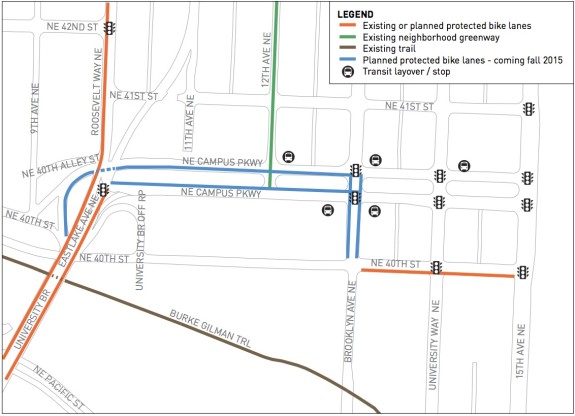 The city has started laying out the spray-paint outlines for new protected bike lanes on NE Campus Parkway and one block of Brooklyn Ave NE in the U District. The project should be complete by the end of September.

The new bike lanes will connect much of UW campus and the U District to the bike lanes on the University Bridge, which are also due for some significant upgrades as part of the Roosevelt repaving project.

The road will still have two lanes in each direction despite having relatively low traffic levels. But they will be skinnier, which should slow speeds a bit and make space for five-foot bike lanes with two feet of buffer and plastic reflective posts. The new bike lanes will be aligned next to the median, sort of like on Ravenna Boulevard.

The project will also add protected bike lanes to one block of Brooklyn Ave NE south of Campus Parkway. This stretch currently has a paint-only uphill bike lane and sharrows downhill, so this is a significant upgrade. 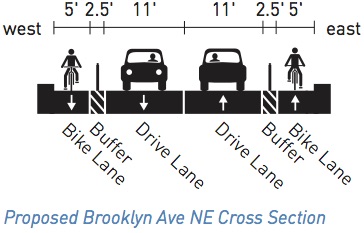 Unfortunately, the bike lanes will only go for a block, stopping one block short of the Burke-Gilman Trail. Looking at the map above shows you just how close we are to finally making a solid connection, but a series of maddening mistakes in planning by both the city and UW mean this connection will remain incomplete.

I asked SDOT why they are stopping short. Their response:

The Brooklyn protected bike lanes will not extend south of NE 40th Street to connect with the Burke Gilman Trail because the roadway on this part of Brooklyn is too narrow to accommodate them. The roadway is only 25 feet wide.  Instead, this section of Brooklyn has a northbound, regular bike lane, and for southbound bicyclists there are sharrow pavement markings indicating that bicyclists share the road with motor vehicles.

But people who look very closely at the sidewalk on this one-block missing link may notice something surprising: It’s not actually a sidewalk. 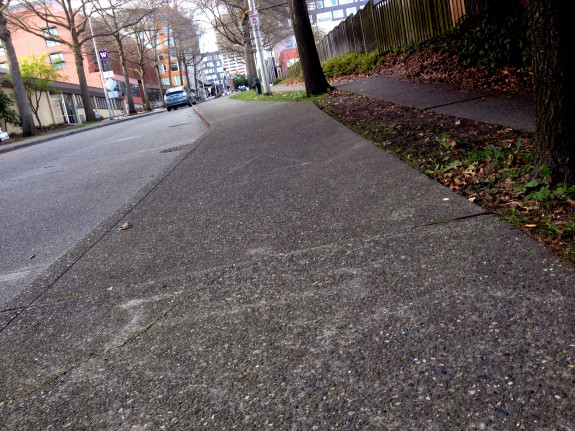 An extremely faded bike marking shows that the area left of the skinny planting strip is actually a decades-old and apparently unsuccessful attempt at creating a separated bike lane.

This lane does not appear on any of Seattle’s bike maps, and even city workers didn’t seem to notice it’s a bike lane and not a sidewalk before installing sign poles in the middle of it.

Worse yet, a more modern development project clearly didn’t get the memo about the bike lanes either and turned part of the downhill lane into planting area for half a block: 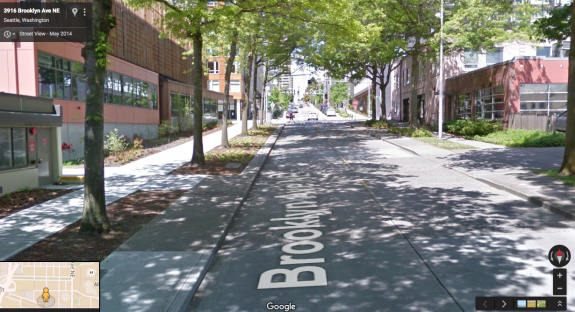 Image from Google Street View. Note: It and our photo above were taken before an uphill bike lane was painted on this stretch.

Maybe it’s time to restore these lanes. Unfortunately, that’s gonna take some work and funding, especially for the downhill lane.

But getting the uphill lane back in working order might only require moving the signs out of the path, laying down some green paint and, most importantly, redesigning the curb cuts at NE 40th Street and the transition at the Burke-Gilman Trail (which was recently redesigned, but leaves a gap in the connection to the old bike lane).

This route will likely become the primary way for people to get from westbound on the Burke-Gilman Trail to the University Bridge, the 12th Ave neighborhood Greenway and the under-construction Brooklyn light rail station. Those are major regional bike connections. Stopping one tantalizing block from actually completing a protected bike route connection is maddening.

And this adds to another maddening missing link: A recently-completed UW building at 12th and Campus Parkway created a new pedestrian connection to the Burke-Gilman Trail, but the ramp is designed as an ADA ramp far below the standards for a safe bike path. That’s right, a brand new connection between one of the busiest trails in the nation and one of the densest neighborhoods in the city does not have a proper bike path. (UPDATE: For more on that project, see this Urbanist story).

So great on the city for the Campus Parkway bike lanes, which are vital. But the work isn’t done yet. Despite all these facepalms, we can still create safe and direct bike connections in this area.