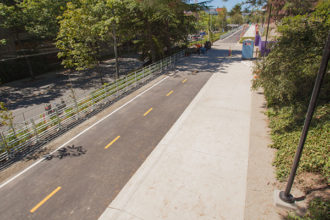 If you biked the UW Burke-Gilman Trail detour today, that was likely the last time you will have to do it.

The trail segment closed for construction in October, just three months after the bridge to Husky Stadium opened. It has been under construction for the entire operational life of UW Station.

Even without the trail, bike access to light rail has been high. Now the Burke-Gilman will be the easiest and more direct route between the U District core and UW Station.

And Pronto Cycle Share announced last week that they will have a bike share station at UW Station by the end of the month. Anything UW, Sound Transit, SDOT and Pronto can do to speed up this station move would go a long way.

Aside from essentially doubling the width, the trail work fixed some tricky spots and blind pathway intersections in the old trail. It also created separate walking and biking spaces to reduce conflicts and added lighting. Even before UW Station, this section of trail could be very crowded. So though the detour was a pain, this should prove to be a big update.

The section of the Burke-Gilman Trail between 15th Avenue NE and Rainier Vista, which has been closed for construction since October 2015, is scheduled to reopen by the evening commute on Monday, August 8th. North-south connections in the area, including the Hitchcock Bridge over NE Pacific Street, will reopen Monday as well.

This highly used section of trail, owned by the University of Washington, has been totally remade. The trail has doubled in width to accommodate increasing capacity levels with the opening of UW Station nearby. Other improvements include separate pathways, on separate grades, for people walking and people biking – making for a smoother, safer trip no matter how you’re using the trail. As on the Rainier Vista underpass section of the trail, if you’re walking, use the concrete sidewalk; if you’re biking, use the asphalt track.

The new trail is safer in other ways, too. Intersections with other pathways are more clearly indicated, both for people using the trail and people crossing it, with grade and surface material changes to cue trail users. The trail will be more well-lit at night, with new overhead LED lights installed along the entire new section. It will also have more blue emergency phones.

In short, the new trail will provide a safer, more comfortable experience, with room for more people to use it safely.

That’s important, because the number of people using it is expected to soar in the coming years. This section of trail connects people to the UW campus, the heart of the University District, UW Medical Center and the new UW Station. Thanks to the University Link extension, ridership on Link light rail has grown by more than 80 percent since last year. And the new SR 520 bridge walking and biking path is set to connect to Montlake Boulevard NE in summer 2017. Plus, a new Life Sciences Complex is scheduled to open along the trail in 2018.

Another piece of this project is the construction of a new secure bike house in parking lot C10, near the T-wing bridge. We expect that construction to be complete in August. UW faculty, staff and students interested in using the bike house for bike parking can email [email protected] to get on our waiting list.

As you might know, the Washington State Legislature and Gov. Jay Inslee awarded the UW $16 million in their 2015 transportation package to make similar renovations to the trail on the east end of campus, from Rainier Vista all the way north to NE 47th Street. In the package, the BGT project is listed as a “Priority 3” project, with the funding scheduled for between 2021 and 2025. In the short term, the UW is committed to preserving the entire 1.7 miles of UW-owned trail.

We encourage everyone to get outside in this beautiful summer weather and experience the newly reopened BGT for a taste of the improved trail that the UW and the region will enjoy for years to come.

Founder and Editor of Seattle Bike Blog.
View all posts by Tom Fucoloro →
This entry was posted in news and tagged burke-gilman trail, uw, uw station. Bookmark the permalink.