We’ve all been there. You get the walk signal and step off the curb. But the person driving keeps inching towards you. You try to make eye contact, but they are looking left for a break in traffic, still inching forward. They don’t even know you are in front of their grill. Will they see you before they hit you? Should I dive back to the relative safety of the sidewalk? Should I yell Midnight Cowboy style?

Joking aside, turns-on-red are dangerous, especially in dense areas with lots of foot traffic. The city says 143 people walking have been hit by people making turns in just the past three years (usually these are right-turns-on-red, though one-way intersections often allow left-turns-on-red). And though turn-on-red collisions are typically low-speed, any collision can be dangerous especially for our youngest and oldest neighbors as well as people with mobility challenges. People can get knocked over, have their feet run over, or worse.

The worst part is that the people who get hurt are crossing with the light. We are taught over and over that it’s safest to wait for the walk signal to cross the street. But that’s exactly when turns-on-red are the most dangerous. This means even the walk signal phase is not a safe space for people on foot. For vision impaired people who depend on the audio signal to cross, people driving into the crosswalk are even more dangerous.

In our twisted road culture, if you cross the street without a walk signal, you are a “jaywalker” and it’s your fault if you get hit. But if you wait for the walk signal, well, you still might get hit (though then it would be an “accident“).

In a way, banning turns-on-red is just a common sense and low-cost way to increase safety and start trying to address downtown’s traffic violence public health emergency. But in another way, it’s one step towards taking back the walk signal for people who are walking.

This year, Seattle will ban turns-on-red at ten downtown intersections with collision history as part of the city’s Vision Zero efforts. The turn bans will also apply to people on bikes, according to SDOT spokesperson Rick Sheridan. Here’s a map of them from KUOW:

Though turning on a red light is probably second nature for people who grew up in the US since the 70s, many nations around the globe have never allowed them except at specifically marked signals. In fact, even New York City does not allow them unless noted.

But though radio shock jocks are already calling the bans an attack on people who drive (really), the supposed benefits of allowing the turns have always been dubious. The amount of time saved on a trip is marginal, and those time-savings are more than eliminated if a collision investigation or medic response shuts down the street. Even somehow ignoring the terrible fact that a person was injured or killed, the time-saving benefits are negligible if it causes more collision backups.

Another reason people cite for allowing the turns is to save fuel. Idling vehicles waste a lot of fuel, so getting them moving and completing their trips quicker should reduce fuel usage, right?

Well, let’s go back to the top of this post. Turns-on-red not only pose dangers for people walking, but they also make the entire experience less comfortable and inviting. If people choose to drive rather than walk, that is far, far worse for the environment (and traffic) than a couple seconds of extra idling. The best way to reduce our personal transportation impact on the environment is to make walking, biking and taking transit more inviting to more people.

And that’s the wonderful part of this change. It costs very little money, but transforms the walk signal into a safer and more inviting space.

The city could even go a step further and couple these changes with a walking head start (AKA “Leading Pedestrian Interval”), a simple and easy adjustment in the signal timing that gives people a couple seconds to get established in the crosswalk before people driving start turning. You can go watch this work extremely well at 17th and Madison near Trader Joe’s, or you can watch this great StreetFilms video:

I only wish these changes were happening in more locations. The city could ban turns-on-red and program walking head starts in every urban village or identified pedestrian zone, for example. Or even better, the city could go full New York City and ban turns-on-red at all intersections unless otherwise noted by a sign or green arrow. 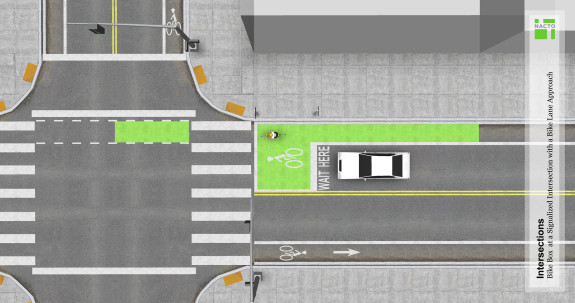 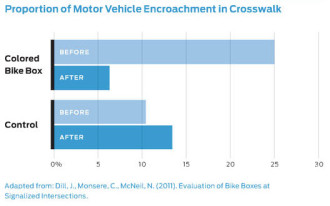 The city could then go even one more step and install bike boxes (AKA “Advanced Stop Lines”) at every signal (they don’t always need to be painted green). Since right-turns-on-red are already banned, there is no reason for the front car to be pulled all the way up to the intersection, often encroaching into the crosswalk. This not only protects the crosswalk space, but also gives people on bikes the ability to get out in front where they are more visible. This helps prevent “right hook” collisions where someone driving makes a right turn in front of someone on a bike who is trying to go straight.

Or we could just skip all these steps and just jump straight to the green wave, especially for intersections with protected bike lanes:

These ten turn-on-red bans are great steps for a safer Seattle, and one I hope continues across the city. Changes like these are easy and smart ways to start making our way towards Vision Zero. They not only make some cheap infrastructure changes, but they also start to shift our driving culture.

And in the end, that’s the hard part. People have habits, and as we’ve seen with people turning across the 2nd Ave bike lane against the red arrow, it’s not easy to make a change like this.

But we need to. And in the end, a couple seconds here and there is a very low cost for saving lives.

This entry was posted in news and tagged downtown, kuow, right turns on red, sdot, vision zero. Bookmark the permalink.