Pronto’s helmet solution just might work, but can it keep up with growth? 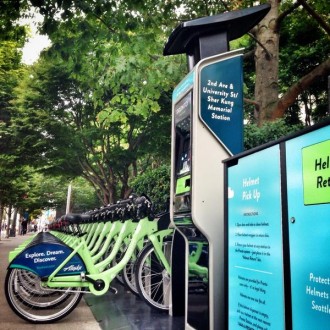 We’ve discussed the challenges of launching a bike share system in a city with a rare all-ages helmet law previously. In fact, we’ve done so at length several times.

But while some other municipalities with helmet laws balk — Vancouver’s planned system has been delayed yet again, and B.C.’s helmet law was cited as a reason — or repeal the adult portion of their helmet laws, Pronto Cycle Share made the call to go ahead with the launch despite the helmet law.

In fact, Pronto even forged ahead despite issues from the maker of their planned helmet vending machines. A much more high tech helmet solution was planned for each station, but Pronto instead launched in October with simple unlocked bins of cleaned and inspected helmets.

In light of the success their temporary solution has had, the bike share system has altered their long-term plans. Now, instead of the potentially cost-prohibitive vending machine setup, they plan to lock the bins with a digital keypad. Members or users will be able to rent a helmet and access the helmets using a code.

The hardware costs of this low-tech solution are only a quarter of the original vending machines they’d planned for. The caveat is that helmet replacement costs will be higher and rental revenues will be lower, but according to Houser the low-tech solution is still projected to be more economical.

Houser is optimistic about this as a long-term solution.

Capitol Hill Seattle reports that the city plans to install keypad-controlled locks on the helmet bin so people can rent them. They expect the locks to be in place next month.

As weather improves, Pronto’s real test is still ahead. By launching in the middle of a very rainy October, the system has yet to have a real summertime run. Users are already taking about 0.63 trips per bike per day, an increase from the 0.5 trip average during colder winter months. But that number needs to rise to meet successes in other cities (with several years of operation under its belt, Capital Bikeshare in DC sees about four rides per bike per day in good weather).

But the helmet bin solution can only scale so far. Regular users have probably arrived to a completely empty bin (or full return bin) a few times, and this problem may only get worse as ridership expands. If system usage grows to a healthier one or two rides per bike per day, that’s double or quadruple the helmets to cram into the bins, requiring more trips by Pronto staff to keep the helmet system in order.

In a city where helmet use is so high, it makes sense to offer helmets to users who want them. And Pronto is proving that it can work. But can a bike share system really flourish under a helmet law? Will ridership explode this summer? Will the new users make Pronto part of their regular habits and continue use year-round? Will the current helmet solution hold up under higher use? Stay tuned. 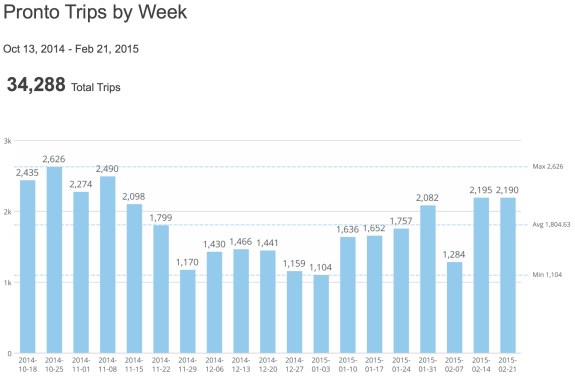 Capitol Hill Seattle recently posted an interesting look at bike share use data. For example, how does rain affect bike share use? Well, pretty much how you think. People still ride in the rain, just not as much.

Ridership has increased in the recent nice weather. If Pronto use mirrors ridership across the Fremont Bridge, July use should be about twice as high for example.

But the first ride on Pronto is the biggest barrier for users. Once you’ve learned how to use the system, it is easier to use it again. So I wonder if usage patterns will be a little different than what we see on the Fremont Bridge. Once we have more data, this could be a rather interesting data crunching project. *wink…wink*

Oh, and have you noticed that 5th and 7th gears click and slip on a lot of Pronto bikes? You’re not crazy. It’s a problem, and they’re fixing them.

77 Responses to Pronto’s helmet solution just might work, but can it keep up with growth?