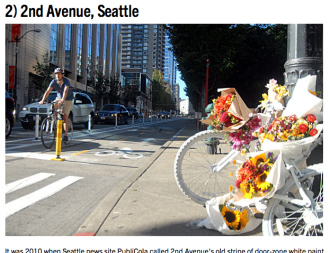 Last year, Seattle made the Green Lane Project’s list of the top ten protected bike lanes for 2013 two times: Linden Ave was 5th and Cherry Street was 9th (more for its awesome origin story rather than actual quality).

Well, the city did even better in 2014. Once again, Seattle made the PeopleForBikes Green Lane Project’s top ten list two times, and this time the city placed a bit higher. The 2nd Ave bike lane clocked in at number 2 and the Broadway Bikeway came in at number 6.

Of course, before we go all out on the self congratulations, the 2nd Ave bike lane has not been perfect. Aside from the fact that there are essentially no connections to this new bike lane from any neighborhood outside downtown, there were also issues with confusing signage and the design near parking garage entrances. One person was struck and injured near an entrance between Pike and Union.

To the city’s credit, they responded quickly to both issues. When the first week of use showed high rates of people driving turning across the bike lane at intersections, SDOT changed the signals and signage to make it more clear when people need to wait before turning. Within hours of the collision at the Union Street garage entrance, SDOT pushed parked cars back from the garage entrance to improve sight lines and make it easier for people turning into the garage to see people on bikes.

If I were to congratulate the city on any aspect of these bike lanes (other than the political will to make them happen), it would definitely be the city’s efforts to observe people’s behavior and make changes to get better and safer outcomes. If the city continues to learn, listen to feedback and improve their bike lane designs, Seattle will certainly continue to make these lists for years to come. But more importantly, our city will be a safer and more comfortable place to get around.