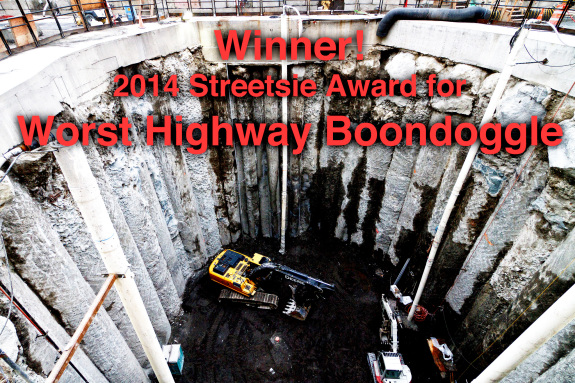 Seattle is a city that is doing everything. Our city makes all the lists of places in the nation that are making smart decisions and getting results.* Best place to get a job? Made that list. Best new protected bike lanes? Made that list. Twice. Again.

But here’s a recognition that few city and state leaders will be proud of: Worst Highway Boondoggle. Actually, this is an award the Alaskan Way Viaduct Replacement Project has won twice. US PIRG highlighted the project in a recent scathing report on misguided highway megaprojects, and Streetsblog awarded it that honor in the form of a Streetsie Award for 2014. Despite strong entries from Milwaukee and Dallas, Bertha “blew away the competition,” according to Streetsblog:

Seattle’s deep-bore highway tunnel to replace the Alaskan Way Viaduct blew away the competition for this Streetsie. The news keeps getting worse as the effort to “rescue” the tunnel boring machine, stuck for a whole year already, is now wreaking havoc on the buildings above. The city has no plan B, and the prospect of going billions of dollars over budget on an underground highway that should never have gotten the green light is frighteningly real. So no offense, Milwaukee and Dallas, your highway boondoggles just aren’t egregious enough this year. Try again in 2015! (I’m sure you will.) 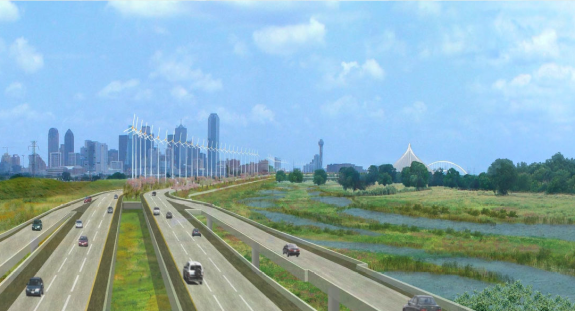 Not only will the freeway concept pictured above in Dallas be susceptible to flooding, but there is zero data to make the case that anyone needs it. Yet this terrible project was dwarfed by the misguided Seattle highway tunnel. That’s right, our highway project is even worse than Texas’s worst highway project. Texas!

I’m sure you all are sick of hearing about how terrible the 99 tunnel project is. I’m sick of writing about it! But it just keeps getting worse. At this rate, I can’t imagine how any other project in the nation has any hope of unseating it for the 2015, 2016 and 2017 Streetsies. Well, unless we wise up, stop waiting for the tunnel and remove the viaduct now.

Mayor Ed Murray, who was a strong tunnel supporter in the state legislature, recently told the Stranger that he is afraid a tunnel failure will hurt the city’s chances to build a totally unrelated subway tunnel for light rail to Ballard and/or West Seattle (Councilmember Tom Rasmussen doesn’t agree). While those concerns should be totally unfounded (voters are smart enough to know the difference between smaller light rail tunnels with lots successful precedent and a risky largest-ever highway tunnel), he could be right that a tunnel failure will not make Olympia any more likely to want to help Seattle build the ambitious transit projects our region needs. This will be especially true if any legislation to make way for a Sound Transit 3 vote gets tied up in statewide debates over funding Highway 99 cost overruns.

And if you believe there are not already massive cost overruns, then I’ve got a 70 percent complete highway tunnel I’d like to sell you.

This all the more reason to make sure what funds remain in the 99 project budget go to mission-critical elements of the project: Demolishing the viaduct and building a waterfront surface street to keep things moving even if the tunnel is never finished. If we throw all our demolition and waterfront street funds into Bertha’s money pit, we’ll likely have no choice but to go back to the legislature for more money (nevermind the years of court battles both with Seattle Tunnel Partners and over the infamous and maybe-not-enforceable law that Seattle must bear any project cost overruns).

When the Seattle Times asked Councilmember Nick Licata at what point WSDOT should scrap the tunnel project, Licata replied, “It might be now.” The best alternative would likely be a combination of a surface street and a big investment in transit.

In a city that is doing so much right and leading the nation in so many aspects of social and urban policy, the 99 tunnel is a behemoth threatening to drag Seattle backwards or, worse, down.

* Obviously, it should be noted that many of these lists fail to fully account for the negatives of the growth they praise. Most often in Seattle, the negatives of strong growth come in the form of unaffordable homes. Thus, the limitations of boiling complex urban issues down to simple lists…