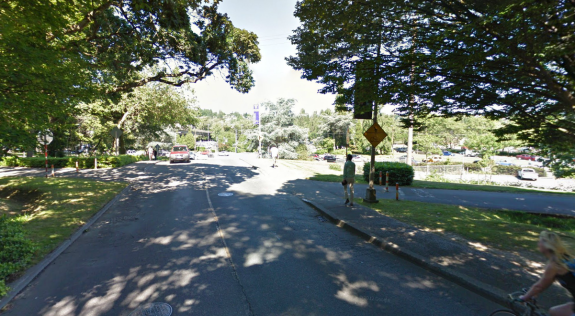 Image of the intersection before the changes, via Google Street View

After many years of confusion and frustration, the UW has decided to turn the intersection of the Burke-Gilman Trail and Pend Oreille Road into a four-way stop.

In practice, most people simply treat the intersection as any other crosswalk, which means trail users go first. This means people driving usually stop, and people biking usually roll through the stop sign. This annoys some people who drive, who see it as an example of how “those bicyclists” never follow the rules. But one trip on a bike and you’ll understand why rolling that stop sign makes sense. Because it is a crosswalk, it delays everyone if the person on a bike stops before starting up again to cross first as typical crosswalk laws require.

Placing a stop sign on the trail breaks the normal order of traffic rules. If traffic rules were a computer program, the trail stop sign would be a bug. But in real life, this means that people largely treat it more as a “caution” sign.

The danger, of course, is that someone driving will not actually stop, and someone on a bike will get hurt. So the UW is turning the intersection into a four-way stop. This will hopefully address the danger of a collision, which is the most important goal of any road design project.

The stop is coupled with additional pavement markings on the trail. The reassignment is based on conversations with our City and campus partners who are staffed with experts in the field of traffic engineering and ped/bicycle facilities as well as UWPD. We will be performing a traffic study with a consultant over the next month to do trail counts at the intersection, study lighting on the trail leading to the intersection, and study impacts to traffic at the Montlake/25th intersection, Pend Oreille/BGT intersection as well as east into campus. We will be fine tuning the signage and pavement markings that were installed over the weekend to best communicate the reassignment and to support safe road and trail behaviors. Our goal, as I am sure you are well aware of, is to reduce the number of potential and actual collisions occurring at this intersection between trail users and vehicles.

Stop signs on a trail are a clumsy way of getting people on bikes to cross the street safely. Best practices say that trails should only have stop signs if there is some special circumstance that requires it, such as especially poor sight lines.

Even the nationally-focused AASHTO traffic engineering guide notes that people’s natural response to a stop sign on a trail that does not make sense is to treat it as a yield sign. This isn’t about “those bicyclists” having some innate disregard for the law, it simply feels like the natural way to treat such an intersection where the crosswalk gives trail users the right of way.

An unnecessary stop sign on a trail is an engineer trying to force irregular behavior onto people. It’s like building a wide, four-lane street and putting a 20 mph speed limit sign on it. Few people will drive that speed because it feels comfortable to go 35 or faster. It doesn’t work.

If only a handful of people are disobeying a traffic rule, they are likely scofflaws who should get a ticket. If nearly everyone disobeys it, you have a street design problem that is sending mixed messages.

A smarter design would embrace people’s natural flow through a space and work with it rather than against it. For example, a raised crosswalk like the one planned for 30th Ave NE would make it clear to everyone that the trail has the right of way. Safe, clear and logical for all users.

But until UW has the budget for a bigger solution, at least the new stop signs for Pend Oreille traffic should help avoid collisions, and that’s a big step forward.

Work on Burke at Seattle border

King C0unty will be working on the trail between NE 145th and 147th Streets just north of the Seattle border this week. So be prepared for delays up to 15 minutes. There will be a detour in place.