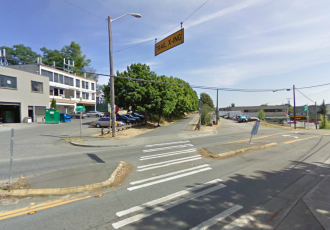 This crossing will become a raised crosswalk soon, further signaling to people driving they have to yield. Image from Google Street View

The city will complete a series of bike/walk improvements to the Burke-Gilman Trail near U Village in the next couple months, including retiming the signals at 25th Ave NE and a new raised crosswalk at 30th Ave NE next to Counterbalance Bicycles. 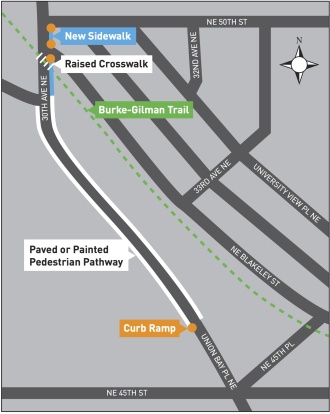 The single biggest improvement trail users will notice is a new raised crosswalk at 30th Ave NE. Like a speed hump, raised crosswalks require people driving to slow down before going through a crosswalk.

But raised crosswalks also give a spatial clue that people driving are entering a walking and biking space. Rather than have the trail or sidewalk lower to street level, the street rises to sidewalk level. It’s a not-so-subtle way of making it clear people need to yield for people walking or biking.

The city will also improve the sidewalks connecting to the trail and make sure there is finally a continuous walking connection to NE 45th Street. 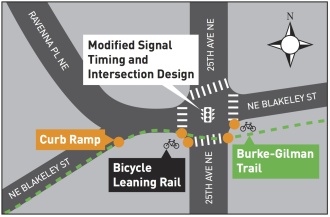 The trail crossing at 25th Ave NE will also get some pretty big upgrades, including a protected trail crossing signal phase, new curb ramps and the city’s first ever bicycle leaning rails.

Today, trail users trying to cross the street have to compete with cars making turns from Blakeley. Not only is this uncomfortable, but the trail is so busy that it can be frustrating to find a chance to make a turn.

The city plans to install bicycle signals and add a phase where people can cross without turning traffic trying to squeeze through. Turning traffic will then get a right turn phase while trail traffic has a red. 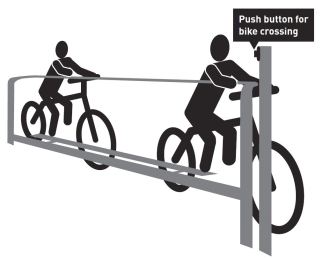 But to put a little cherry on top of the project, the city will install Seattle’s first-ever bicycle leaning rails, which give people on bikes a comfortable way to stop and wait for the light without putting their feet all the way on the ground. The rail will also have its own push button to trigger the light.

But the rail is not only about luxury for people on bikes. It also provides people an incentive to wait in a location where they don’t block the sidewalk. Today, since the push buttons are all near the intersection, people biking tend to pile up at the intersection. And since trail use is so high, this can easily end up with people blocking the sidewalk.

Work on the project should begin this month and be complete in early 2015. Obviously, you should plan on some delays during construction. More details available on the SDOT website.