Burke-Gilman Trail crossings get big upgrades near U Village 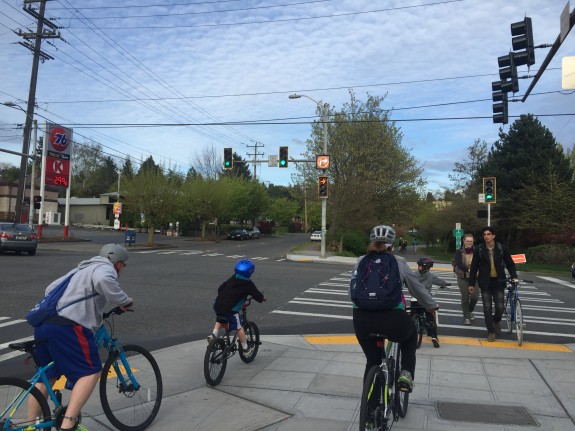 The city completed work on some significant upgrades to two busy Burke-Gilman Trail intersections near University Village in recent months.

As shown above, wider curb cuts and new separate bike/walk and right turn phases have dramatically improves comfort and safety at 25th Ave NE. And an awesome and very hard to miss no right turn sign was installed in addition to the red arrow just to make it even more clear that, seriously, don’t turn right. As we have learned from 2nd Ave, a red arrow is not always enough to get the message across.

The change is significant because people walking and biking now have a signal phase where they don’t have to worry about people turning in front of them or trying to inch and push through the crowd. 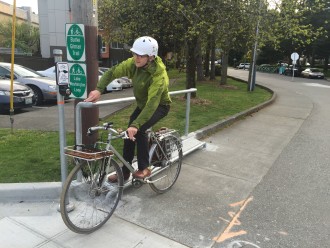 The city also installed two leaning rails and push buttons set back from the sidewalk. The first of their kind in Seattle, the leaning rail is partly to give people biking a comfortable place to wait and partly to reduce the number of people gathered in the sidewalk space near the corner to help keep a walking path clear.

From what I could tell in my observations and in chatting with Cascade Bicycle Club’s Brock Howell and Kelli Refer about it, the biggest problem with the rail is that it’s too short. Only a couple people can use them, and bike volumes are just too high. The westbound direction seems to work a little better than eastbound, where the rail is pretty far from the intersection.

The new raised crosswalk at 30th Ave NE replaced a crossing that was already pretty decent, at least compared to a lot of other trail crossings.

I observed the intersection for a while, and it seemed to work very well. I was surprised to see how many people driving stop before even entering the raised section of the crosswalk, giving people walking and biking a lot of breathing room to make their crossing. In fact, I don’t see any need for the stop signs facing the trail, which only seem to confuse people.

As a crosswalk, trail users have the right of way (and people biking must yield to people walking always, of course). The raised crosswalk only makes this more obvious.

Stop signs facing trail users are confusing because they send mixed signals, simultaneously telling people on bikes to stop and to go. It’s essentially like having a traffic cop holding one hand up to tell you to stop while waving you through with the other hand. Most people biking respond to this mixed signal by slowing down, looking around and proceeding with caution, and most people who drive stop and wait for trail users to cross. This is the safe and natural way to handle such an intersection, and it would make more sense to just sign the crossing as such.

The stop signs also confuse some people who think that a stop sign on the trail means people biking should stop and wait for people driving through the intersection. In fact, even with the stop sign people biking likely still have the right of way thanks to the crosswalk, though the stop signs make the whole situation unnecessarily confusing. Does a person at a trail stop sign count as being “upon” the roadway, the legal requirement for someone driving to stop? Even SDOT doesn’t seem to know, so how are we to expect the average person driving or biking to know?

Rather than arguing over semantics, best practice would be to just design the crossing so it is both safe and obvious to everyone how to use it. This goes for trail crossings all over the region, including several in Kenmore and on UW campus.

Do you use the new crossings regularly? Let us know your thoughts in the comments below.

This entry was posted in news and tagged burke-gilman trail, u village. Bookmark the permalink.